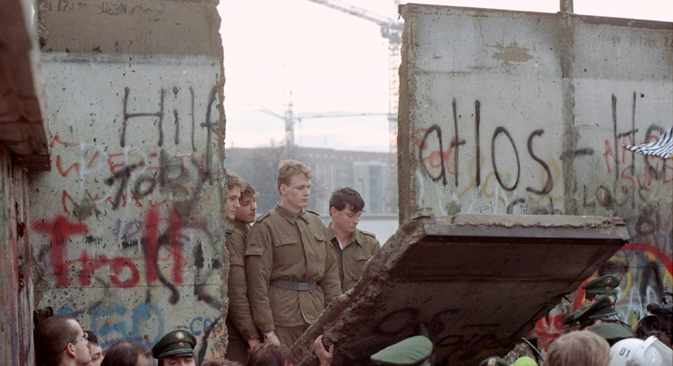 The fall of the Berlin Wall in 1989 marked the establishment of a new world order. What changes will 2013 bring? Source: AP

When Nobel Peace Prize winner Kofi Annan visited Moscow to present his new book, experts on diplomacy talked to Russia Direct about a new world order and the future of superpowers.

Shortly after the presentation of his book, Annan and other UN Foundation officials discussed with the students of the Moscow Institute of International Relations (MGIMO) the prospects of global governance and a new world order.

When asked by Russia Direct about future scenarios of how the world will develop and what role superpowers will play in it, Annan said there are likely to be a lot of “poles” in the future and that countries will “be able to check each other”.

“I have never accepted the concept of a unipolar world,” he explained. “It’s also a disturbing concept because there are always other poles. When you believe that there is only one elephant in the room, your behavior is different. [Yet] there are other elephants; you also have to keep that [in mind]. And there is more than one elephant in the world today.”

Below, Russia Direct interviews experts, international observers and UN Foundation officials who share their ideas of how superpowers will adjust to the new world order.

We need to think historically about [a new world order] because the world has always struggled and not always succeeded in finding the right types of institutions we need. Since 1945 (when the UN was created), there have been important modifications that have helped nations and peoples to work together.

However, the UN has not succeeded in many ways. How will the world order look like in 20 years? Well, if this question was asked 20 years ago, people would probably say they should reform the United Nations and its Security Council to incorporate a better picture of the totality of the world, not the world of 1945: incorporating India, at least one big African country, a Latin American one, because currently the Security Council does not represent the world of 1993.

However, we are here 20 years later and this does not happen because it has proven to be a very intractable issue to deal with as those who have privileges, those who have already had those privileges for 70 years, are not giving in, they are keeping their power and not letting in new actors.

BRICS is building a model of global co-operation

And this stalemate has to be solved. Yet it has proven to be very difficult to share power in a more reasonable way. That’s why we see not only the G8, but also the G20 and the BRICS. It’s an attempt by a certain number of countries to be a counterforce to the dominant power of the U.S., which is why they gathered together.

But they don’t have common purposes. If you look at Russia and Africa or Brazil, they have very different national interests. That’s why BRICS are not really effective as a body.

Meanwhile, the UN is a common institution for all of us. It’s where we have to be a kind of global governance, a kind of democratic model of decision-making where every one of the 193 nations should take part.

What are the forces that are now working? What may happen? Obviously, the distance between countries and people will disappear because of technologies and governments will become symbolic because people will communicate and make decisions. The big and strong government that controls everything – that will disappear and be obsolete.

Their orders are not valid anymore: people will decide what to do because they have power to do that. What I mean is that power from the state authority will be shifted to the people. Yet we need the government because there is something we can’t do as individuals.

Global politics: In search of the world's new policeman

In addition, countries will not be islands anymore. In other words, their borders will disappear. We will still have governments, but there are no borders. Hundreds of years ago there was no passport, no visa. Twenty years from now, there will be no visa and there will be no passport again. And this is a kind of world that we are automatically moving to.

When we take long procedures of getting visas, let’s say, to Russia, people ask: Why do we need this?  So, what will happen after 2013 is something like science fiction: You can imagine what you want.

The 19th century classical ‘multi-polarity’ is hardly likely to revive in the modern world: The level of globalization is very high today and there are a lot of actors in global politics that can’t be controlled by big powers. The survival of the classical ‘superpower’ of the late 20th century is even less likely.

Probably, the world will be a more complicated structure with emerging and disappearing coalitions, unions and alliances aiming at resolving separate and specific problems.

These coalitions will include not only governments, but also private corporations, non-governmental organizations, mass media and so on. At the same time, governments are likely to preserve their role as the major geopolitical actors in the near future.

The “currency” of power will change: traditional tools (military power and economic diplomacy) will be expanded and, in several cases, the tools of ‘soft power’ will replace them.

The concept of leadership will also change, in terms of the capabilities of great powers to anticipate and prevent crisis situations and put forward new ideas and proposals to increase the efficiency of global and local governance.

In other words, the role of the “intellectual” in the measurement of foreign policy will increase. In this world order, the only big powers that will preserve their positions will be those that will be able to use their foreign policy instruments in a more efficient way.