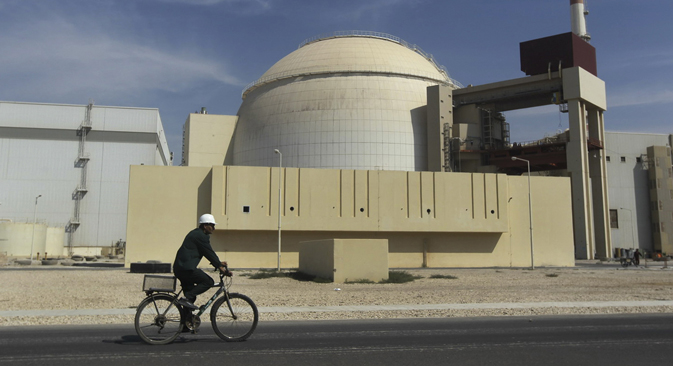 A worker rides a bike in front of the reactor building of the Bushehr nuclear power plant in Iran. Source: AP / Mehr News Agency / Majid Asgaripour

Vladimir Putin prepares to pay a visit to Iran to make a deal with Hassan Rouhani.

Kommersant has learned that Russian President Vladimir Putin is scheduled to visit Iran on Aug. 12. According to sources involved in preparations for the visit, the Kremlin is hoping to use Iran’s election of a new president, Hassan Rouhani, to revive negotiations on the country’s nuclear program.

Vladimir Putin will also discuss bilateral issues, such as the construction of new power units for the Bushehr Nuclear Power Plant. Experts view the upcoming visit as “promising yet risky.”

“The visit [by Russian President Vladimir Putin to Iran] is scheduled to take place on Aug. 12–13,” a source close to the Iranian Ministry of Foreign Affairs said. A Kommersant source in the Kremlin confirmed that the visit is in the works, although it remains to be seen whether it will take place over one or two days. The source added that this depends on the agenda, which is “still being worked out.”

President Putin last visited Tehran in October 2007 to take part in the Caspian Summit, on the fringes of which he met with Iran’s former President Mahmoud Ahmadinejad and Iran’s supreme leader Ayatollah Khamenei.

The 2007 visit galvanized Russian-Iranian relations, which deteriorated once again during the presidency of Dmitry Medvedev, who terminated a contract for supplies of the S-300 anti-aircraft missile systems to Iran.

According to Kommersant sources familiar with preparations for the visit, the conflict surrounding Iran’s nuclear program will be a key item on its agenda. Putin announced in June: “Iran is playing by the rules in the nuclear sphere. There is no evidence to the contrary.”

The Russian president added, however, that “there are open questions,” but “provided there’s patience and willingness to work with each other in good faith, it’s possible to find answers.”

It seems that Moscow is counting on Rouhani, who is believed to be a reformer, to demonstrate more flexibility than his predecessor did in discussing his country’s nuclear program.

“We need to capitalize on the current situation — the coming to power of a new president — to push the negotiations forward,” a Russian diplomatic source told Kommersant. “The visit will allow us to gauge the new Iranian leadership, to see if they are ready to move in the direction of paying more attention to the international community’s demands.”

At the same time, according to the source, the situation is complicated by the fact that Iran’s president has limited powers: It is Ayatollah Khamenei who calls the shots. To nudge him to a compromise, the West will have to guarantee a lifting of sanctions.

Two years ago, Moscow presented a proposal to settle the Iranian nuclear problem via step-by-stem mutual concessions (the so-called Lavrov Plan). That initiative has yet to be implemented, but the Russian president’s visit could breathe new life into it.

“Everything will depend on negotiations with Ayatollah Khamenei,” PIR Center president Vladimir Orlov said. “For Putin, this visit is promising yet risky: Many have slipped trying to resolve the Iranian nuclear problem.”

Vladimir Putin is also expected to discuss bilateral relations in Tehran — above all, cooperation in the nuclear power and military-technical areas.

During his visit to Moscow in early July, the outgoing Iranian President Mahmoud Ahmadinejad referred to Russia’s construction of new power units at the Bushehr Nuclear Power Plant as essentially a done deal. However, Kommersant sources insist that Moscow has yet to make a political decision on this matter.

Rosatom has stated that the state-owned corporation’s relations with Iran are limited to the completed first unit, and no negotiations on any other projects are under way.

Kommersant’s sources in the nuclear power industry explained that Rosatom is not really interested in continuing its work in Iran, now that it is bidding for contracts in the Czech Republic and Finland.

What to expect after Iran’s presidential election

In addition, Rosatom actually incurred losses from building the first unit for the Bushehr: The contract was drafted in the 1990s, when it was more important to secure orders for the Ministry for Atomic Energy than it was to make a profit. Yet Kommersant’s sources did not rule out that Russia would “meet Iran’s request in this area, for political reasons.”

In the military-technical area, Moscow has already met Tehran’s demands by offering it the superior Antey-2500 systems instead of the S-300. The Russian government is hoping that the out-of-court compromise will help convince Iran to revoke a $4-billion lawsuit it filed against Rosoboronexport for breaching the S-300 supply contract.

Tehran has not yet responded. A source close to Russia’s military-technical cooperation system said that Vladimir Putin would, “without fail,” mention this subject during his visit.