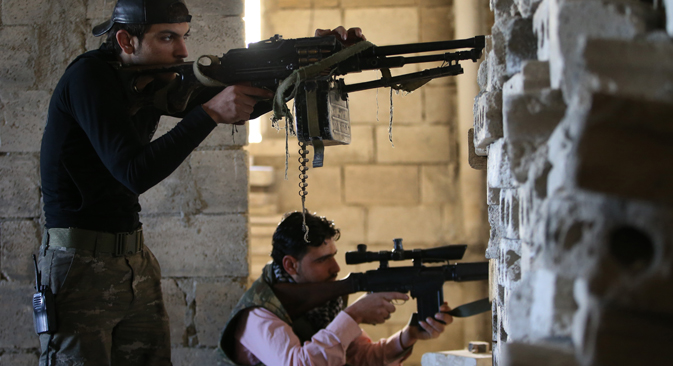 The Russian Foreign Ministry has announced that Chechen natives are fighting on the side of the Syrian opposition. Source: AP

An international terrorist organization is emerging in the north of the country.

The Russian Foreign Ministry has formally recognized the presence of Chechen warlords in the war in Syria. The ministry said in a statement that one of the Islamist groups fighting against Bashar al-Assad is headed by Chechen native Abu Musab. Kommersant has ascertained that more than 100 Chechen militants are fighting in Syria.

The Russian Foreign Ministry has announced that Chechen natives are fighting on the side of radical groups in Syria. The statement was issued after Islamists active in the north of the country staged a massacre of local Kurds in retaliation for the capture of Abu Musab (their commander who identifies as a Chechen).

Having demanded Musab’s release, Islamists massacred civilians, beheaded innocent bystanders and took some 500 Kurds hostage — most of them women, elders and children. Abu Musab has since been released, but Islamists are still holding nearly 200 Kurdish hostages and using them as human shields.

“Moscow resolutely condemns the atrocities of the terrorist international in the northeast of Syria,” reads the Russian Foreign Ministry’s statement. It describes the events as “a bloody provocation aimed at destroying the country, and the establishment of a jumping-off point for international terrorism.”

Chechen warlord Abu Musab's real name is unknown, as militants who have following the Wahhabi path traditionally use aliases. In the past, top terrorist Shamil Basayev called himself Abu Idris. Tamerlan Tsarnayev, who carried out the April 2013 Boston Marathon bombings, was known in his circle of associates as Muaz Seyfullah, or “Allah’s sword,” in Arabic.

Chechen separatist Usman Ferzauli, who lives in a Western European country and presents himself as the foreign minister of Ichkeria, has confirmed to Kommersant that Chechen militants are among the ranks of the Syrian opposition.

“It is hard to say exactly how many Chechens are fighting there, but I think there are certainly more than a hundred,” Ferzauli said. Most of the Chechens fighting in Syria, he claims, hail from the North Caucasus, although there are also some “European Chechens” — the children of those who to fled Europe during the First and Second Chechen Wars. Ferzauli believes they all reach Syria via Turkey.

The separatist revealed that Chechens are called to fight for the Syrian opposition by the Caucasus Emirate terrorist organization. The Caucasus Emirate, banned in Russia, is headed by Doku Umarov, who is the leader of the armed underground in the North Caucasus.

Chechens are recruited by Isa Umarov, whose cousin is the Caucasus Emirate ideologue Movladi Udugov. Both have gone down in the history of the self-proclaimed Republic of Ichkeria as organizers of the jihadist coup against President Aslan Maskhadov in 1999.

A year ago, the son of once well-known Chechen warlord Ruslan Gelayev was killed in Syria. The rebels’ websites claim that he died fighting for the opposition. The deceased’s relatives alleged that the younger Gelayev was studying in Syria at the time and was killed in a mosque by a government air raid.

Another high-profile scandal that broke out a year ago involved the British photographer John Cantlie and his Dutch colleague Jeroen Oerlemans: Both were kidnapped by Islamic radicals in the north of Syria and spent about a week in captivity.

Upon his return home, Cantlie said that his kidnappers were “anyone but Syrians,” and may have included Chechens. The photographers managed to escape after the Free Syrian Army fighters intervened.

According to Ferzauli, the government of Ichkeria opposes the involvement of Chechen fighters in the Syrian war. “Isa Umarov and Movladi Udugov advocate global jihad,” he told Kommersant. “This position is alien to the Ichkerian leadership.”