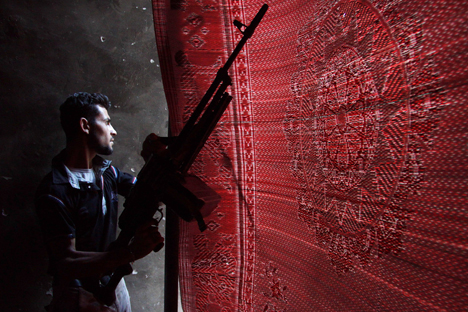 Jihadists recruit those who find themselves in difficult situations.

Police and special services in St. Petersburg are searching for recruiters sending Russians to fight in Syria. Among the Russian Muslims who have taken part in a jihad is Yegor Ryabinin, known under the nickname ar-Rusi. Fontanka tries to find out what made the father of two leave his family for likely death in the Middle East.

Fontanka’s correspondent met with Yegor Ryabinin’s wife, Maryam. In spite of 82-degree heat, Maryam came to the meeting wearing a hijab and a long dress. Only the tips of her fingers were visible under her sleeves.

The mother of two related the story of how her husband ended up fighting in Syria.

He came to the capital from Karaganda in Kazakhstan. He felt lonely without his relatives; he was not getting along well with his father. In the early 2000s, the future ar-Rusi was in search of religion, as well.

He attended church and began to study Islam. He adopted the new religion together with his friend Roman, who was also from Kazakhstan. Together they moved to St. Petersburg. Their paths diverged when Ryabinin got married.

“Yegor is a very open and candid man. We met on the Internet. He asked straight away whether I had any intentions of getting married. We started going out and he turned out to be very reliable and caring,” says Maryam.

In the fall of 2009, Ryabinin’s friends were killed during a special operation on the border with Tajikistan. One of them was Roman, who had assumed the name of Khan when he converted to Islam.

“They were called there by a guy called Rinat — a former commando who had taken part in operations in the Caucasus. Yegor had refused to go himself and tried to talk others out of going, but they thought fighting was romantic and did not listen to him,” Maryam says, recalling the events of four years ago.

In February 2010, the Investigative Committee charged Ryabinin with extremism and, in April 2011, he was sentenced to correctional labor due to some offensive comments he had made on social networks justifying the murder of the Moscow priest Daniel Sysoyev.

Ar-Rusi put his active extremism on hold to look after his son, who had nearly died at birth. When his son was diagnosed with cerebral palsy, Yegor vowed that, if his little boy recovered, he would, for the first five years of his son’s life, go where he would be needed and devote his life to the struggle for Islam. Six months later, Daniel made a miraculous recovery.

Maryam says that, when their son became well, Yegor was still thinking of going to the Middle East — but her second pregnancy and pleas from his relatives delayed his trip. After the birth of their daughter, the family situation became difficult.

Savings were running out and people were not eager to hire an Islamist with a previous conviction; some were embarrassed by his Muslim prayers and others asked him to shave off his beard.

The couple’s son was a sickly child, and ar-Rusi decided that this was Allah’s punishment for his unfulfilled vow. It was around this time that a fellow Muslim from the Northern Caucasus went to Egypt. They started communicating with each other on the Internet, and Yegor’s friend offered to help him get to Syria.

On February 4, 2013, he flew to Turkey. He was joined the next day by a Slavic Muslim, Vadim from St. Petersburg. Yegor communicated with his family from Turkey and Syria. The two men from St. Petersburg found themselves in a training camp.

In early April, they went on an exercise and Ryabinin warned his family that they would not be able to contact him for the next two weeks. He has not been heard from since.

Yegor’s worried wife has tried to find out what happened to him. In late April, she learned from the Internet that Yegor and Vadim had been killed when they were ambushed near Homs. Three Chechens were also allegedly killed during the ambush. They were all buried by the side of a road that had no name.

Maryam now has to raise her two children alone. She plans on obtaining formal confirmation that her husband is dead. Many of her friends have advised her to move to Turkey or Egypt, but she is in no hurry to follow their advice.

“Daniel would climb on Yegor’s back when he was praying. Now he asks me why daddy has been away for such a long time and wants us to go and be with him,” Maryam says quietly.

Yegor’s mother, Lyudmila Ryabinina, says that her son began thinking about religion after he was in a serious traffic accident in Moscow. The family only learned that he had become a Muslim in 2007.

“On February 8, he called me and said he was in Turkey. He said he would stay there and get his family to move over. Somebody had advised him to. It never crossed my mind that he intended to fight,” his mother says. She is sure her son was recruited. After all, when his friend Roman was going to war, Yegor was trying to dissuade him and told him to seek the opinion of his family.

“He is kind and clever. I am sure he is alive. No matter whether he has been taken prisoner or has been wounded, we want him back. I want him to know that we need him,” says Lyudmila, who has learned to fight back her tears.

Law enforcement officers whom Fontanka journalists talked to said they knew that Ryabinin was going to leave Russia. Shortly before his departure, he was raising money and collecting references, allegedly to study at a religious school. Various agencies knew about the real aims of his trip, but there was no legal way they could stop him.

“Agitators target people who are in trouble, tell them that they will be serving God, promise good pay; but neither the romantics nor the fanatics have any idea of the situation in Syria. From our information, Ryabinin died at the hands of his fellow fighters, who thought he was a Russian spy,” policemen say matter-of-factly.