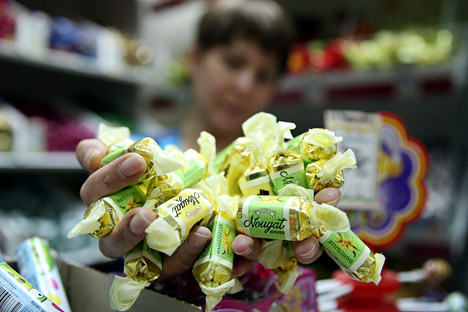 In late July, Russia banned the import of Roshen products, the largest manufacturers of confectionaries in Ukraine, after the dangerous substance of benzopyrene was found in them. Source: ITAR-TASS

Ukrainian politicians see restrictions on the export of goods from Ukraine to Russia as a trade war. Russian experts, however, think that Kiev is making a mountain out of a molehill.

According to information from the Federation of Employers of Ukraine (FRU), all Ukrainian exports have been placed on the “high risk” list by the Russian Federal Customs Service (FCS) since Aug. 14. This means that goods supplied to Russia will have to undergo special scrutiny.

As the FRU stated, Ukrainian manufacturers were faced with running checks starting in late July. As per the organization’s estimation, losses for the Ukrainian side caused by Russian customs officials could amount to as much as $2.5 billion.

According to the FCS, Russia’s trade turnover with Ukraine decreased by almost 20 percent (down to $18 billion) during the first half of 2013. The growth slowdown in both countries and the artificial barriers between them were the reasons for this decline.

Opinion: Russia does not want another Soviet Union

In late 2012, Russia reduced the quota for the duty-free import of pipes for Ukraine, and, in July of this year, Russia decided not to extend the quota at all for the last six months of 2013.

Ukraine responded this spring by implementing a special tariff on the import of automobiles having engines with motors larger than 1,000 cubic centimeters.

In response to this move, Russia informed the WTO (which both countries are members of) in June about measures to increase the number of duties on Ukrainian products — in particular, chocolate, sugar and coal. In late July, Rospotrebnadzor banned the import of Roshen products into the Russian Federation, after the dangerous substance of benzopyrene was found in them. Roshen is one of the largest manufacturers of confectionaries in Ukraine.

Many Ukrainian politicians and experts have interpreted the actions of its neighbor as the unleashing of a genuine trade war. Thus, the Ukrainian party UDAR characterized Russia’s customs inspections as a show of force.

Various Ukrainian experts think that, by introducing regular obstacles for the import of goods from Ukraine, Moscow is trying to force Kiev to enter into the Customs Union and decline signing an Association Agreement with the European Union, as planned for November.

The Russian side, however, is certain that talk of a trade war is unwarranted. An announcement by the press service of the government of Russia indirectly attests to this, stating that the regulations on imports from Ukraine were adopted by the customs authorities, not the government.

Ukrainian Prime Minister Nikolai Azarov called for the problem not to be exaggerated and for there to be a convergence between the two countries’ technical regulations. He also emphasized that Ukraine will develop cooperation with both Europe and the countries of the Customs Union.

In the opinion of Russian experts, Moscow’s actions are nothing extraordinary. “Countries have the right to make rules stricter, especially when this follows announcements of problems with the quality of goods,” said Yaroslavl Lisovolik, head economist of Deutsche Bank Russia.

According to Lisovolik, the convergence of mechanisms of customs control would be beneficial for both countries. “Russia and Ukraine seek integration, which will have a positive impact on the economic growth of both countries. But it should happen through the growth of trade, rather than its reduction,” the expert said.

According to the director general of the Agency for Political and Economic Communication, Dmitry Orlova, Russia’s actions should not be considered as a trade war and will not affect long-term relations between the countries. Russia is hardly affected by the situation, since price corrections will be insignificant.

“As nearly 25 percent of its exports go to Russia, Ukraine primarily suffers from the conflict,” said Dmitry Polevoy, an economist from ING Bank. “If it is not quickly regulated, Kiev risks losing part of its foreign currency earnings, which could further aggravate the already imperfect currency forecast for the hryvnia; many experts do not rule out the possibility of its devaluation by the end of 2013, or by the beginning of 2014.”

“As for Russia, the shortage of goods from Ukraine will likely be compensated. Local companies may increase their production, and imports could become partially oriented toward manufacturers from Belarus,” Polevoy said.