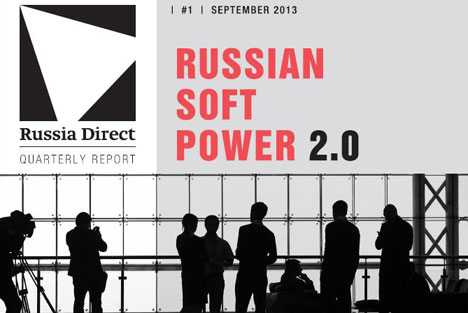 Russian foreign policy is focusing more and more on soft power, presumably in an effort to improve its international position. Russia Direct will publish its Quarterly Report Soft Power 2.0 on Sept. 3, analyzing Russia’s efforts in the areas of international development and exchange.

With the world becoming increasingly interconnected, the conventional diplomatic methods and technology are giving place to the so-called ‘soft power’. While the western countries are widely endorsing public diplomacy and international development as the soft power instruments, Russia is only developing new tools of its foreign policy.

In mid-February President Vladimir Putin unveiled an updated Foreign Policy Concept, which, among others, envisages economic diplomacy and soft power as the top priorities.

Drawn by the huge potential of soft power in shaping a country’s global agenda, on Sept. 3, Russia Direct will publish RD Quarterly Report Soft Power 2.0 which analyzes possible overlaps of international development efforts and traditional public diplomacy initiatives to suggest specific policy directions that would be most applicable for Russia to increase its international standing.

The report is written by Alexey Dolinskiy, a partner at Capstone Connections consultancy and director of Ward Howell Talent Equity Institute. Dolinsky holds a Ph.D. in Political Science from Moscow State Institute of International Relations and an M.A. in law and diplomacy from Fletcher School. The report includes a broad overview of global soft power practices as well as Russia’s approach to international development, educational exchange programs and establishing international development bodies.

However, a closer look to both concepts reveals intersection between them. Public diplomacy evolved into cooperation between the business sector, civil societies, media and general populations of different nations where international organizations, private companies, NGOs and individuals have become full-scale public diplomacy actors.

At the same time, international development is not only about providing unconditional aid from a donor country to its recipient but also about building up bilateral relations that help to achieve such a level of appreciation in a host country that its leaders become likely to concur with the sponsor’s policy in a specific situation.

Mr Dolinskiy then proceeds with what he calls a ‘strategic question’: “How can one combine foreign policy goals that help others without compromising the ability to achieve one’s own aims?” The further chapters come closer to the answer with regard to Russia. 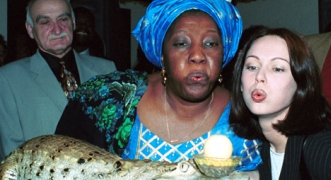 The next part of the report describes the role of educational exchange programs as the effective tool for strengthening a country’s influence. The author describes how the educational programs are implemented in countries, traditionally leading in this field: the United States, Germany and Canada.

Surprisingly enough, but Russia, which was one of the leaders in the educational exchanges in 1950-1986, is still a big player, being the eighth-most popular higher education destination with 4 percent of the global market of international students.

However, in many cases educational grants and stipends are not coming from top schools. The distribution of the large majority of stipends is also not transparent and the process of selection students is not clear.

This makes it hard to align Russian degree programs, available for foreign students, with its international development and public diplomacy priorities. In other words, educational exchanges are just not working properly in the soft power-related direction.

As the country’s soft power is not limited to rendering humanitarian aid to those in need and carrying out students exchanges, a significant part in fostering soft power via international aid is given to private actors, nonprofits and the general public.

Unlike countries that have international development agencies responsible for promoting foreign policy’s agendas through assisting other nations in developing better living conditions, Russia has yet to create such body.

The author views this task as the key challenge since there is an obvious absence of project management skills, as well as the types of legal, political and financial competencies to establish international development institutions.

This task is however technical enough to be successfully solved. The crucial stumbling point for effective soft power policy still lies in formulating priority areas corresponding to the needs of other countries and complying with Russia’s economic and social development.

Dolinskiy concludes the analysis with a twelve-step program envisaging the steps Russia should take to strengthen its ‘soft power’ positions ahead of the crucial events it is going to face within the next years (presiding over G8 in 2014 and BRICS in 2015 as well as Sochi 2014 Winter Olympics and the FIFA World Cup).

Though the proposed steps can not be viewed as the only right solution, they however demonstrate a profound analysis, proved by the up-to-date surveys and statistics on Russia’s position on the ‘soft power’ global scene so it can not be ignored.

If you want to read a full version of the Soft Power 2.0 report and subscribe to RDweekly email newsletter by 4 pm D.C. time, Sept.3, please sign up here.