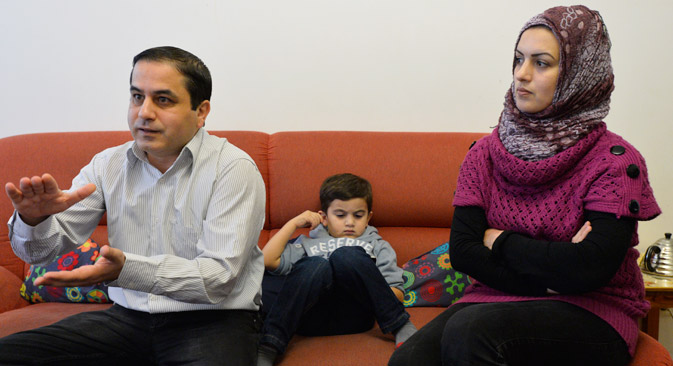 When clashes broke out in Syria, many families were forced to flee and some of them ended up in Russia. A family of five — Yarob Rashid, a 39-year-old pharmacist, his wife Susannah Annazhi, and their three sons — used to live in Afamia, a small town near Hama. Their move to Moscow was helped by Yarob's ability to speak Russian and by the fact that his brother living in Russia managed to send them a visa invitation. RBTH interviewed the transplanted family.

Yarob Rashid’s family arrived in Moscow on January 26, 2013. They now live in an apartment that Yarob’s brother helped them to rent, and the children go to school. Still, the memories of suffering are still vividly fresh in their minds.

Yarob Rashid: When it all started, we were going to demonstrations, and they were like a festival: We were even taking children to them. No one stopped us. And, all of a sudden, arms appeared. I do not know from where. What for? We were told [it was] for the protection of civilians. No one was killed or arrested in our town until a motorcycle was blown up near a military post at the entrance to Al-Skelbia [20,000 inhabitants, Christians]. After that, the army set up a camp near our town. And quite unexpectedly for residents, Muslim Brotherhood militants began to shoot at the side of the camp every day. Residents of the populated areas pleaded to militants not to use their homes to fire at the army, but they did not listen to their pleas and outrage. Suddenly, militants started to have a lot of money, fighters, weapons and vehicles: They became a real force.

More: Why Russia is against a war on Syria

One day, I was at my pharmacy and an armed man came. I said to him: “You allegedly armed yourselves to protect civilians, but why do you use us as human shields, as you fire from houses where people live?” Of course, he did not answer me, but the next day an exchange of fire broke out between those firing from the houses and the army, and a 3-year-old child was killed. This child was the first civilian victim.

Susannah Annazhi: Our house had an inside room and we used it as a refuge. When we had to leave our home, one week after that a shell hit this very room where we were hiding from bullets. However, the war came to where we fled.

When we again left that house where we were hiding, we rented an apartment in a safer area and then moved to Al-Skelbia.

Y.R.: The two friends started to argue with each other — one was in the Free Army, and the other was in the government army. As a result, one of them killed the other. The victim was from the Free Army. A brother of the man who was killed supported the Free Army: He was giving them some $6,000 every month.

S.A.: They burned down the home of this brother, his dairy factory, his son's home and several retail shops, as well as five more homes of his close relatives. The burned down even the house of my uncle, who had nothing to do with this story at all, and the shop was burned down, too. They burned down my aunt's house and a pharmacy.

Y.R.: This pharmacy was one of the biggest in the area of Hama. Baby food alone in it was worth $300,000. The owner of this pharmacy gave $70,000 to save it from being burned down. They took the money and still burned down the pharmacy.

Then pharmacists of the city decided to call a strike, to close their pharmacies for one day. I also closed my pharmacy but then was immediately warned [that] if I do not open my pharmacy, they will burn it down. This actually happened to other pharmacies: They broke the door and threw grenades inside, so everything was burned down.

The situation was increasingly bad: Shells hit our house 3 times before we left and 2 times after we arrived in Russia.

S.A.: They were shooting all the time. My children's fear and my fear for the children pushed me the most to flee. We recently lived in congestion—15 people in one room.

[Looking at her middle son] He used to go to his grandfather’s home even when it was dark, but now he is afraid to go to the toilet alone—we wait for him at the door. He shudders from any sharp sound. When there were fireworks in Moscow, the children thought that the war had begun again.

Y.R.: We are not the only ones who fled. About 65 percent of residents have left our area. They fled to Turkey or to other parts of Syria. Many people have no passports, no money.

S.A.: Our city lost it all: There is no food, no water and no electric power. We started to bake bread at home on the fire. We bought flour at a very high price. On one occasion, we lived with the children without a piece of bread for three days. It was very cold in the winter. One day, an intensive exchange of fire started. We hid in the corridor of the house and sat down there on the stone floor. We were freezing, but it wasn't possible to take warm clothes from the rooms, because bullets were hitting the windows very often.

Russian women become victims of the war in Syria

Ahmad [the eldest son]: We also spent nights in the corridor.

Nasser [the middle son]: No, we lived in the corridor; we slept there and we ate there, too.

I do not know anyone here... Why didn't I bring my friends Ibrahim, Mahmoud, Rashid here...?

[The youngest son]: And I miss my uncle and grandfather.

Y.R.: We'd love to go back, but this is not a feasible thing to do. Therefore, we have applied for refugee status. Now, the most important thing for me is to obtain a work permit. How will we be able to live without work? However, our situation is still a hundred times better than the situation of other people.