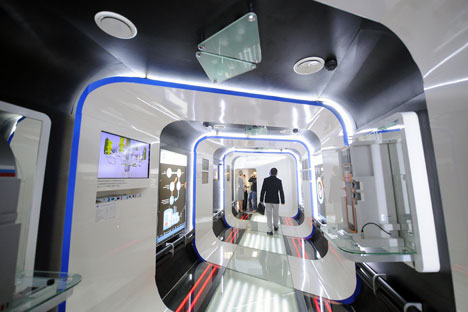 Russia aims to boost technology-led economic growth at home by pouring money into technology start-ups and venture funds — including $1.5 billion in the U.S.

Investment companies owned by the Russian government have funneled $1.5 billion into U.S.-based technology startups and venture capital funds in an effort to build business ties and lure expertise and private capital toward Russian industry.

The spending is part of a multi-billion dollar effort to rev up Russia’s own high-tech corridor and diversify its economy away from oil and gas exports.

Rusnano, a $10-billion technology enterprise set up by the Russian state, is responsible for the lion’s share of the U.S. spending, or about $1.36 billion. Another state-owned fund of funds called the Russian Venture Company, or RVC, has injected about $100 million, according to representatives of the companies.

“For us, the investors, the number-one goal is to make money,” said Dmitry Akhanov, CEO of Rusnano’s American unit, Rusnano USA. “For the Russian government, one of the main goals was to support the commercialization of technologies in Russia.”

RVC has also established a Boston subsidiary that helps Russian entrepreneurs navigate the tricky waters of American finance and commerce. The unit has helped groom Russian businesses for Boston’s MassChallenge, the world’s premier startup competition, and donated $100,000 to this year’s event.

“Our mission is to build an economic bridge between the U.S. and Russia,” says Axel Tillman, head of the Boston office. “RVC-USA is a beachhead.”

RVC USA is pushing to enhance Russia’s presence broadly among American startup and biotechnology communities. Russia submitted the second-highest number of applicants to the 2013 MassChallenge event, after only the United States and twice as many as in 2012. Fifty-four Russian start-ups applied out of a total 1,200 startups from 39 countries, and four Russian teams made the grade.

“RVC’s goal in the U.S. is primarily to create relationships between the Russian innovative ecosystem and the U.S. venture community,” Igor Agamirzian, CEO of RVC, said in an emailed response to questions. “Partnership with U.S. venture investors is an important vehicle for increasing business expertise and fostering technological vision among Russian startups.”

Rusnano has made similar investments in the U.K. ($300 million), China ($253 million), Israel ($54 million) and Italy ($58 million), according to a Rusnano presentation. The firm has invested about $4.2 billion inside Russia.

The company has so far invested a total of about $6.3 billion into over 100 hi-tech ventures worldwide, in sectors including life sciences, microelectronics, clean technology, energy efficiency and advanced materials.

Spending in the U.S. has been concentrated in life sciences and electronics, with a smaller share going towards energy and nanocoatings. The firm has invested in 18 portfolio companies and partnered with four venture capital groups in the U.S.

Russia, the world’s biggest producer of crude oil and natural gas, is seeking to parlay its natural resource wealth into support for innovation-led economic development. Officials hope to kick-start a Russian answer to Silicon Valley while nurturing a fledgling venture capital community to fund the inventors.

“The Russian venture capital market is growing fast, but it is still lacking experience and business expertise,” RVC’s Agamirzian says.

Developing ties with U.S. firms should help make up for the deficit, he said.

The Russian state has also spent billions on the Skolkovo Foundation, a non-profit established by the government with a mandate to foster innovation-based economic growth and build bridges with foreign academics and researchers.

More than 30 global corporations including Boeing, Cisco Systems, General Electric, Samsung, and Johnson & Johnson have signed research and development partnership deals with Skolkovo, and 28 of those — more than half American — have pledged to invest a combined $500 million.

“Skolkovo is a massive government-led effort to diversify the Russian economy away from its dependency on natural resources,” Vekselberg said in an emailed statement. “Skolkovo’s American partners play a vital role in this effort.”

The $500 million will be used in part “to establish corporate research and development centers at Skolkovo,” Vekselberg said.

Skoltech aims to have 300 full-time faculty by 2020, Vekselberg said.

Capital commitments from Rusnano have been paired with agreements by the target companies to establish manufacturing or research operations in Russia, Akhanov said. Joint ventures set up by Rusnano and its partners have commissioned 30 research and production facilities across Russia.

Thanks to these and other measures, nine out of 24 drugs approved by the U.S. Federal Drug Administration in the third quarter were clinically tested in Russia.

Rusnano is led by Anatoly Chubais, the redheaded former Deputy Prime Minister who played a key role in privatizing Soviet industries back in the 1990s. The company, whose name derives from its mandate to invest in nanotechnology, was set up in 2007 by an act of parliament and converted into a joint-stock company in 2011.

Rusnano’s web site says the company aims to boost nanotech business activity in Russia up to an annual sector-wide turnover of $30 billion by 2015.

Rusnano has teamed up with Princeton, New Jersey-based Domain Associates LLC, a healthcare-focused venture capital firm that has raised over $2.7 billion, according to the firm’s web site. The two firms have targeted a combined co-investment of about $760 million into approximately 20 U.S.-based healthcare companies.

In July, Rusnano, Domain Associates and other investors injected $55 million into ReVision Optics, Inc., a California-based firm which is researching solutions for age-related eyesight deterioration.

Dixon Doll, co-founder and partner of the Menlo Park, California-based venture capital firm DCM, said in an interview that government action can indeed help spur venture activity. But he said the state’s most important role should be creating space for private capital to flourish.

“The government can be very helpful in stimulating a vibrant entrepreneurial ecosystem,” Doll says. “If Russia wants a good model, it should look long and hard at what China did,” he said, pointing to a series of Chinese laws allowing foreign investors to put money into offshore vehicles that could easily and securely invest in Chinese startups.

Rusnano, RVC and Skolkovo hosted the second annual Russian Innovation Week conference in Boston on Sept. 17 and in Silicon Valley on Sep. 19-20, attended by Chubais, Vekselberg and Agamirzian.

“Judging from the first day of the conference, there seems to be a lot of enthusiasm for Russian ideas from American business,” said Rinat Dosmukhamedov, Russian Trade Representative in the U.S. "Russia demonstrated not only world-class scientific developments, inlcuding in biosciences and IT, but also a preparedness to promote them on the American market."

“We need American expertise even more than investments,” Vekselberg said. “We have big plans, and working together with American partners, we can make these a reality.”

Russia fielded more entrants to this year’s MassChallenge, the world’s biggest start-up competition, than any country besides the U.S. Russia’s four finalist teams are now competing with 128 start-ups for $1 million. During the June to October program, applicants get mentors, free office space, access to funding sources and a tutorial in how to launch a business.

A program designed to alert web service managers to client-side glitches that may go unnoticed by providers. Qbaka is building a tool for tracking errors, monitoring performance and testing automatically. “We track errors on the Web sites and tell developers about them so that [they can] fix them,” says Daniil Gitelson of Qbaka.

A game that aims to teach kids the basic language of computer programming. The player must reprogram a robot whose job is to maintain a spaceship after a collision with a meteor. “We decided to create a game where players can program a robot and see the results immediately,” says Ksenia Kopylova of Sputnikbot.

The team at Zet Universe aims to revolutionize the idea of the computer-user interface by reorganizing information into “visual clusters” inside spacious environments that can be shared, dispensing with today’s computer folder. “Interfaces are stuck back in the 1970s,” says Alexander Popov of Zet Universe.

Dressformer is pioneering 3D fitting technology that aims to take the guesswork out of buying clothes online. The company’s virtual fitting rooms are based on 3D avatars and the fitting technology aims to increase retailers’ profitability by addressing fitting and likability issues simultaneously, reducing the odds of a returned purchase. “We want online retailers to sell more, and we want shoppers to find the right size when they shop online,” says Vagan Martirosyan of Dressformer.