Fulbright: A win-win situation for Russians and Americans 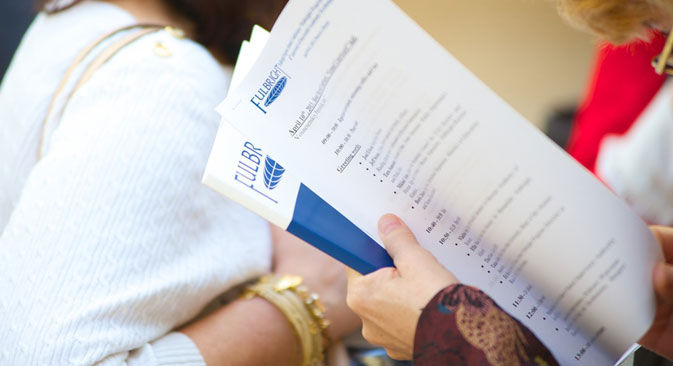 This year the U.S. government’s flagship Fulbright exchange program marks its 40th anniversary working in Russia. One of its most popular programs is the English Teaching Assistant (E.T.A.) fellowship, which brings recent college graduates to Russia as English teachers at Russian universities.

“They are placed all around the country, except Moscow and St. Petersburg,” said Marina Bezrukova, a Fulbright Program officer and E.T.A. program coordinator.  E.T.A.s help teach the English language while serving as cultural ambassadors for the U.S. E.T.A.s may also pursue individual research plans in addition to their teaching responsibilities.”

Stephen Barton of Syracuse University in New York and Hanna Miller of Sewanee, the University of South in Tennessee are two of the 28 young Americans who will spend the next nine months teaching English in Russian universities.

Barton, 23, will teach English to Russian engineering and economics students at Samara State University of Transport. During his time in Russia, he also hopes to travel. He spent part of the last two years cycling across the United States.

“I really like traveling and meeting people in particular,” he said. “And that inspired my bike trip across America. And this travel to Russia, for example, a railway trip to Siberia is extension of that [trip]. I hope to see people and compare Russian people to American people: I expect to find more commonalities than differences.”

During his bike trip, Barton visited 13 states – Virginia, Kentucky, Tennessee, Alabama, Mississippi, Arkansas, Louisiana, Texas, Oklahoma, Colorado, Utah, Nevada and California. “The bike trip reminded me why it’s important to travel: by traveling you are broadening your mind and you are supposed to learn different lifestyles,” he said.

Barton plans to visit many places in Russia including Kazan, Irkutsk and Vladivostok. He says he decided to study Russian because of – rather than in spite of - its challenging grammar and vocabulary.

Improving his Russian was one of the main reasons Barton applied for the Fulbright grant. He also hopes that this trip will help him develop his photography and interviewing skills. “It will be fascinating to take portraits of people here in Russia and ask them the same questions and combine these two things: interviewing with photography,” he said.

But he takes his responsibilities as a teacher seriously. “First and foremost, I want to be a good teacher to make sure that my students have good experience and learn a lot,” he said.

Miller, 22, will teach English to students at Kazan Federal University in its department in Naberezhnye Chelny, Tatarstan.

“I expect to learn much more about the Tatar state and I expect to understand a mix of cultures within one culture and within one nation,” she said. “I am doing interviews with Russian and Tatar grandmothers to learn about how feminine identity is formed in Russia. I am really interested in how language creates reality. I’ll be doing this by teaching language on a daily basis and seeing how people learn it and interact with it.”

Miller says that studying Russian has given her the opportunity to think in two different dimensions.

“I would say speaking Russian has made me a more assertive person in both languages,” she said. “The Russian language can be direct and abrasive in some Americans’ points of view. But I think we are more alike than we are different.”

According to program coordinator Bezrukova, the E.T.A. program exemplifies the mission and goals of the Fulbright Program – to strengthen mutual understanding between the people of the U.S. and Russia. Bezrukova believes that the E.T.A. program is especially crucial because it gives Russian students in small regional cities the opportunity to learn from a native speaker.

What drives Americans to go to Russia?

“E.T.A.s represent their country and their culture both in the classroom and outside the classroom, communicating with students, for whom they may actually be the first Americans to talk to in real life,” she said. “Basically they are not just teaching English, but also explaining their country to Russian students, who may sometimes have little contextual understanding of the U.S.

“Moreover, they also get to learn about another culture from an actual person representing it, which may completely reverse their view of the country as presented by mass media. It’s a win-win situation.”