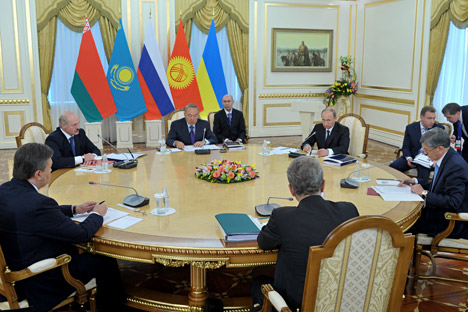 The intention of creating a Eurasian Economic Union was confirmed on Oct. 24, at a summit between Russia, Belarus and Kazakhstan. Source: Alexey Nikolsky / RIA Novosti

India, Turkey and even Syria may become members of this new economic bloc.

At a summit held in Minsk, Russia, Belarus and Kazakhstan confirmed their intention to form a Eurasian Economic Union in 2015, on the basis of the Customs Union. Subsequently, Turkey, India and even Syria may join this new alliance, according to the leaders.

However, according to President Vladimir Putin, Ukraine, having set a course for associate membership in the EU, will not be able to enter.

The intention of creating a Eurasian Economic Union (EAEU) was confirmed on Thursday, Oct. 24, at a summit between Russia, Belarus and Kazakhstan. All domestic conciliation procedures necessary for its entry into force have to be completed by May next year. This was announced by the leaders of the three countries at the summit held in Minsk.

However, the transformation of the Customs Union (CU) into the Eurasian Economic Union still faces many obstacles. The status quo was most actively criticized by the president of Kazakhstan, Nursultan Nazarbayev.

“Participation in the Customs Union has brought more disadvantages than advantages to Kazakhstan,” said Nazarbayev, “and has led to increasing disparity in the trade balance of the country. We still face the same difficulties in the promotion of Kazakh food products on the Russian market; there is no free access to the Russian energy market; there are limited opportunities for electricity transit; the Customs Code of the CU is in need of maximum simplification and liberalization.”

The Kazakh leader also spoke out against the rapid expansion of the Customs Union. “First, we need to solve the existing problems, and then deepen the integration and accept new members,” said Nazarbayev.

Finally, Nazarbayev proposed discussing Turkey’s and even Syria’s accession to the Eurasian Union. “Whenever I travel to the West, I’m always asked: ‘Are you re-creating the Soviet Union under the guise of the Customs Union?’ So, to avoid such talk, let us admit Turkey. It is a big country, and there will be no more of these discussions,” said the president of Kazakhstan.

However, Nazarbayev laid down a condition: All members of the Union must have the same rights, as was the case when creating the European Union. Nazarbayev invited leaders to discuss the prospects of admitting Kyrgyzstan and Tajikistan. This requirement, Nazarbayev added, applies to Armenia, which has expressed its desire to join the Customs Union.

Nazarbayev also mentioned that, after the establishment of the Eurasian Economic Union in 2015, the EurAsAC, which duplicates its functions, would cease to exist. “We don’t need this organization. It has to be closed — that is obvious,” said the president of Kazakhstan.

Complaints about the functioning of the Customs Union were also expressed by his Belarusian counterpart Alexander Lukashenko. The particular discontent of the Belarusian leader was caused by the “numerous exemptions” from the current legislation of the CU.

“Since we have agreed, then let us create a real unified economy and remove these exemptions,” said Lukashenko. “The number of exemptions and restrictions has not decreased, in some areas it has even increased.”

Vladimir Putin neither argued against nor tried to persuade his CU colleagues. However, he recalled that, in the three years of its existence, the Customs Union has proven its effectiveness. The macroeconomic indicators of members of the CU are “quite good” against the background of the slowdown in the global economy, said the Russian leader.

Putin kept in reserve his main argument in favor of further integration. He said that, during Monday’s visit of the Indian prime minister to Moscow, the prime minister asked him to consider the possibility of signing a free trade area agreement with the Customs Union.

At the same time, Vladimir Putin, at a press conference after the meeting of the Supreme Eurasian Economic Council in Minsk, said that Ukraine would not be able to join the union after the signing of the agreement on associated membership in the EU.

“No, it’s impossible,” said the head of the Russian Federation in response to a question about the prospects of Ukraine's accession to the Customs Union. At the same time, Russia is not going to interfere in Ukraine’s process of European integration, the Russian leader said, adding that Moscow is neither for nor against. “It's not our business; it is the sovereign right of the Ukrainian leadership in the person of the president, parliament and the government,” said Putin.

According to Putin, the impossibility of Ukraine's accession to the CU lies in the creation of the free trade area between Kiev and the EU, reported ITAR-TASS. The fact is that Ukraine will have to abandon most of its import tariffs and open its market to products from the EU.

“Such an opening of the market is very dangerous for us and is not acceptable at this stage of our economic development,” said the Russian president.

Based on materials from ITAR-TASS, Kommersant and Gazeta.ru.