Ukraine does a U-turn on Europe 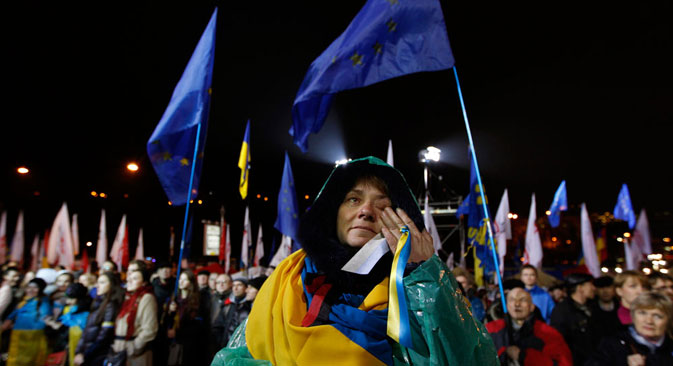 Passionate protest: a woman wipes away a tear at a demonstration in Kiev against Ukraine’s rejection of the EU agreement. Source: Reuters

Yanukovych declines a deal with the EU as economic realities hit home.

President Viktor Yanukovych’s last-minute rejection of a planned Association Agreement with the European Union was unexpected and shocking for most of Ukraine’s public, who are imbued with the idea of European integration.

Up to 100,000 demonstrators took to the streets of the capital, Kiev, prompting comparisons with protests on Independence Square during the pro-western Orange revolution of 2004. Some attempted to storm the prime minister’s offices, prompting riot police to use batons and tear gas, and there were opposition rallies in many other cities across the country. The charismatic opposition leader Yulia Tymoshenko declared a hunger strike from prison over Mr  Yanukovych’s turn away from Europe and towards closer ties with the Customs Union of Russia, Belarus and Kazakhstan.

Bound by the ties of history

Russia and Ukraine have deep historical, cultural and religious ties dating back more than 1,000 years. In common with neighbouring Belarus, they trace their origins to the Kievan Rus, a ninth-century federation that united the majority of East Slavic tribes.

Eastern Christianity was introduced across the realm after the baptism of Vladimir the Great in 988. Much of present Ukraine was part of the former Russian Empire and known as “Little Russia”;Kiev remained under Kremlin rule during Soviet times, until independence in 1991.

Eastern and southern Ukraine is mostly Russian-speaking, while Crimea transferred from Russia to Ukraine only in 1954, after a ruling by the Supreme Soviet.

His change of heart ahead of this week’s Eastern Partnership summit in Vilnius, Lithuania between the EU and six former Soviet republics prompted opposition parties linked to the Orange cause to claim that Mr Yanukovych had betrayed Ukraine’s national interest for his own political gain. Arseniy Yatsenyuk, leader of the “Fatherland” parliamentary party, claimed that Mr Yanukovych had struck a “bargain” with Moscow for a $20bn reduction in gas prices, “half of which will be stolen, and half of which they will spend on the election campaign so that Viktor Yanukovych will be able to falsify the presidential elections in 2015”.

In reality, the situation was neither as dramatic nor as simple as Ukraine’s opposition made out. Moscow certainly played a key role in halting Ukraine’s European integration, not out of a desire to restore the Soviet Union but from a need to protect Russia’s interests. Economically, a number of Ukrainian and Russian industrial enterprises are parts of the same production chain.Ukraine also has great emotional significance for Russia because Russian statehood was born on the territory of modern Ukraine. Even now, most people in Kiev not only know Russian but speak it in everyday life.

From an economic viewpoint, Russia would have to protect its market from an inflow of cheap European goods through Ukraine into its territory and this would put an end to the free trade arrangement that currently exists between the two former Soviet neighbours. That is why Moscow did not want Kiev to sign an agreement that would, in Russia’s view, make Ukraine an economic and political appendage of Brussels.

But Mr Yanukovych’s refusal to sign the agreement was also rooted in fears for Ukraine’s economy, as those who read the full document realised. The deal gave full access to Ukraine’s market for European goods, but there was no reciprocal access to the European Union for Ukrainian products. Rather than free trade, Ukraine would be assigned strict quotas, particularly on agricultural produce. For example, Ukraine produces a total of 30,000 tons of cheese per year, but would be allowed to export only 5pc of it, or 1,500 tons, to Europe under the agreement.

The situation with poultry is even worse: Ukraine produces a million tons of chicken meat per year, but would be permitted by the agreement to export only 1pc, or 10,000 tons, to the EU, while being obliged to import 20,000 tons of poultry from Europe. Meanwhile, Russia has made clear that it would have to impose duties on Ukrainian exports, making them less competitive, as a result of any endiing of their free trade zone.

Mr Yanukovych admitted the economic pressures in a television interview on the eve of the summit, saying: “Today our economy is sick.”

Kudrin: Ukraine to lose from association with EU in the first 5-10 years

The president may be playing a strategic game to gain benefits from both the EU and Russia by continuing to manouevre between them, as Ukraine has done for some time. But there are also two short-term electoral imperatives. “Yanukovych does not want to gamble before the presidential election. He doesn’t need the confrontation with Putin,” Vadim Karasev, director of the Ukrainian Institute of Global Strategies, told RBTH.

A souring in relations between Ukraine and Russia could encourage Russia's media to focus more attention on the deteriorating economic situation in Ukraine's Russian-speaking south-eastern industrial regions. Mr Yanukovych might also face the risk of a domestic challenge at the polls from a political opponent who advocated improved ties with Russia, a constituency that currently supports the president.

The second issue is linked to Tymoshenko, who was jailed for seven years in 2011 for abuse of office as prime minister. Europe’s politicians have repeatedly told Mr Yanukovych that there will be no Association Agreement while she remains in prison. Brussels has suggested various solutions, from an amnesty to sending Tymoshenko abroad for treatment for a chronic back complaint. But Ukraine’s pro-presidential Party of Regions has rejected six legislative attempts to create grounds for her release.

Party leaders insisted that the “Orange Princess” – Tymoshenko’s nickname after her role in the 2004 revolution – would remain in jail. Presidential adviser Anna German said: “Europe must make a choice between Ukraine and one person. If one person is more important than the whole state and nation, then, perhaps, we should end our mutual approach.”

Can Ukraine afford a divorce from Russia?

Mr Yanukovych is well aware that Tymoshenko is seen as his main rival in the presidential election, just as she was in 2010. She is the preferred candidate for both a large part of Ukraine’s electorate and for foreign powers.

“Ukraine’s president should act as a mediator between the Ukrainian elite and the Kremlin, as well as Ukrainian elites and Brussels and Washington,” said Mr Karasev. In his view, Mr Yanukovych’s relations with Moscow and Brussels have been damaged by the struggle over European integration, but Tymoshenko’s relationship with both sides remains quite good.

Mr Yanukovych suggested last week that Ukraine could still sign an Association Agreement with the EU “when we are able to negotiate reasonable terms”. But he quickly added: “Time will show if it happens soon or not.”