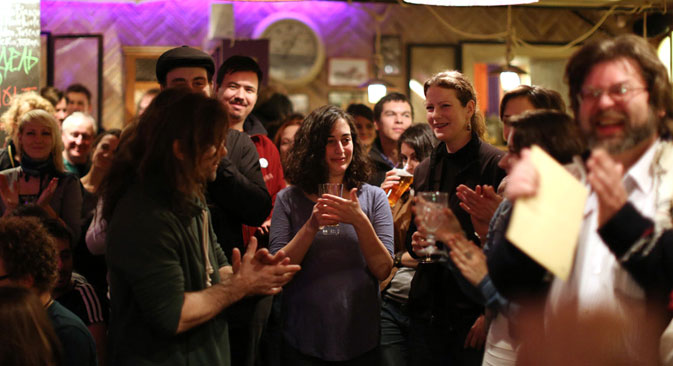 The crew of the Arctic Sunrise. Source: Denis Sinyakov / Lenta.ru

The 30 Greenpeace activists arrested during an arctic protest have received amnesty and will be allowed to return home.

Russia has granted amnesty to all 30 Greenpeace activists from the Arctic Sunrise icebreaker who were arrested after attempting trying to board the Prirazlomnaya platform in a protest against arctic drilling.

The Greenpeace activists detained on the Arctic Sunrise icebreaker in the Pechora Sea were notified of termination of criminal proceedings against them in connection with the State Duma declaring an amnesty.

The last crewmember of the Greenpeace vessel Arctic Sunrise, Italian citizen Cristian D'Alessandro, has received documents confirming that the criminal case opened against him has been dropped under Russia's amnesty law.

While amnesty typically assumes full confession to the crime, the Greenpeace activists have not admitted guilt.

The release of one of the crewmembers, Italian Cristian D'Alessandro, was delayed because of the activist did not have a translator and his case had to be rescheduled. He was released on December 26 after receiving documents confirming that the criminal case opened against him has been dropped under Russia's amnesty law, Interfax reported.

"On December 24, the Investigation Committee started to close the criminal cases. All activists accepted the amnesty, but none of them admitted their guilt in the imputed offense," said the Greenpeace Arctic Program Coordinator Evgenia Belyakova to the Vzglyad newspaper.

The amnesty comes just days after several other high-profile Russian prisoners were granted early release under a new bill adopted by the State Duma last week. Mikhail Khodorkovsky, who wrote a letter to President Vladimir Putin asking for early release after 10 years, and two of the members of the punk-rock bank Pussy Riot were also released this week.

The representative of the Russian Greenpeace branch, Ivan Bokov, told to Interfax that the organization hopes for amnesty of all the crew members of the Arctic Sunrise vessel by the end of this week.

On the day before, Fontanka.Ru reported that all the arrested Greenpeace activists gave their written consent to the termination of criminal proceedings under an amnesty. The first to be amnestied was the Arctic Sunrise ship’s captain, the American Peter Wilcox.

However, one of the Greenpeace representatives in Russia said to ITAR-TASS that the defendants in the case have the right to refuse amnesty and bring it to court to seek full recognition of their innocence.

The Investigative Committee of Russia does not comment on the information on the release of the environmental activists.

The sanctions against foreign Greenpeace activists will be considered individually by the consular and visa service. It is possible that they will be prohibited from entering Russia because they were subject to criminal investigation here.

The activists were arrested on September 18 after holding a protest against oil exploration in the Arctic from the Arctic Sunrise icebreaker and tried to climb onto the Prirazlomnaja platform, which was carrying out drilling works on the shelf.

Their action was prevented by the Russian FSB Border Service. All 30 activists who were on board, were arrested and placed in the pre-trial detention center of the Murmansk region, where they spent two months. Initially, the "greens" were charged with piracy.

Putin said that the organization’s representatives could not be called pirates, but made it clear that he does not justify their actions. The charge was then changed to hooliganism.

As the lawyer Konstantin Trapaidze explained, "requalification of the article already means that the investigators did not find any constituent elements of piracy in the Greenpeace activists’ actions, but the act of hooliganism was established. Accordingly, if the investigation has already issued new charges, the former charges are irrelevant."

Those charged with piracy face up to 15 years in prison if convicted, while the maximum sentence for hooliganism is seven years.

In late November, a court released the defendants in the Arctic Sunrise on bail of two million rubles ($62,500) for each one of them.