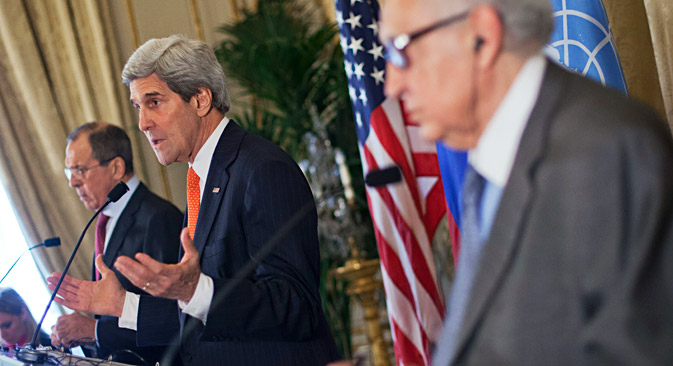 Syria’s opposition group’s inability to come to a united understanding threatens to delay the start of the peace conference.

In making any predictions about GenevaII, the Syrian peace conference that opens on January 22 in Montreux, Switzerland, no degree of caution would be supererogatory. The different delegation’s goals are diametrically opposed, and the main sponsors of the event, the United States and Russia, say the conference will be just the first step in a long and arduous process.

It is expected that Swiss President Didier Burkhalter will be the first to address the delegates on the first day of the conference. He will be followed by U.N. Secretary-General Ban Ki-moon, and then by the two coinitiators of the event, Russian Foreign Minister Sergey Lavrov and U.S. State Secretary John Kerry.

Syrian representatives, both from the government and the opposition, and foreign ministers of other participating states have also prepared speeches. Invitations to attend the conference have been sent to 30 different capitals. Once the orations have been delivered, the warring factions are supposed to start negotiating.

Even getting all the parties to attend the conference is not an easy task. Speaking to journalists on January 17, Lavrov did not even try to conceal his irritation.

“The main reason [for the delays] is not that they want to prepare as well as they can for the conference that will determine the future of the Syrian state and the Syrian people,” the minister said. “The main reason is internal squabbling among the various groupings within the coalition, which all have the backing of various foreign sponsors.”

After excruciating debates in Istanbul, on January 18 the National Coalition of Syrian Revolution and Opposition Forces finally made the decision to attend the conference. But a mere two days later, on January 20, the Coalition said it would not attend after all, in protest against the decision by the Geneva 2 organizers invitation to Iranian representatives.

The recent gyrations by the National Coalition are once again raising the question of whether the part of the Syrian opposition it represents is politically relevant. The organization has already gone through several internal splits; the latest happened on January 6, when several opposition groupings broke away in protest against the re-election of the Coalition's president, Akhmad al-Jarba.

SoyuzNefteGaz contracted to drill for oil in Syria

The main problem, however, is that although the National Coalition has been recognized by the West as one of the participants in the peace talks, it does not actually have much control over the armed rebels fighting against the government.

As a result, the Coalition is not really in a position to discuss ceasefire, prisoner exchange, or humanitarian deliveries, i.e. any of the first steps towards peaceful settlement. What is more, its inability to undertake any commitments on these issues — which will probably become painfully obvious during the conference — will likely be the death of that organization. That is why the Coalition is stubbornly insisting on its own agenda.

The Coalition leader, Akhmad al-Jarba, has said that “Geneva II is an irreversible path towards having all the demands of the revolution met; the key demand is for Bashar Assad to lose all his powers."

The demands for Assad to step down could lead Geneva II into an immediate impasse; the main organizers of the conference, Russia and the United States, are unlikely to stand by and watch it happen. After all, there are no references whatsoever in the Geneva I documents about the Syrian president's political future, and the subject is not formally on the Geneva II agenda.

While the opposition continues to play for time, the jihadists fighting in Syria are gaining strength. The country is turning into a magnet for extremists from all over the world; that is the main worry of the sponsors of the conference.

"I am confident that the primary focus of the conference should be the fight against terrorism,” Lavrov said. "This is currently the main threat facing Syria and the rest of the countries in the region."

Fighting the threat of terrorism in Syria also figures prominently in the documents adopted at last year's G8 summit.

“Any delay with the peace talks only strengthens the Islamist extremists fighting in Syria,” said Vyacheslav Matuzov, head of the Russian Society for Friendship and Business Cooperation with the Arab States. By dragging their heels on the negotiations, the opposition and its sponsors risk finding themselves on the wrong side of this struggle.