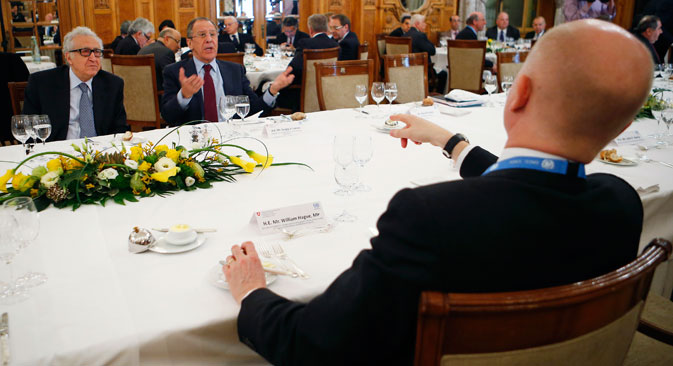 The first round of the talks is expected to last for 7 to 10 days. Source: Reuters

Russia insists a political settlement is the only way to end the crisis.

The international conference on Syria, dubbed Geneva II, opened on January 22 in Motreux, Switzerland. It offers the best hope so far of ending the bloody Syrian conflict.

In his opening address, U.N. Secretary General Ban Ki-moon cited some horrible figures. During the three years since the conflict in Syria began, it has claimed the lives of 100,000 people. Another 6.5 million have been left homeless; 2.3 million — half of them children — have been forced to flee to neighboring countries. More than 9.3 million are in urgent need of humanitarian aid.

Ban Ki-moon expressed his gratitude to the Syrian government and opposition representatives for finally sitting down to negotiate. “I would like to thank the delegations from Syria for coming here,” he said. “Your presence gives us hope for a settlement of the conflict.”

"It is clear that the inter-Syrian talks will be neither easy nor quick," Lavrov said. "There are many forces who say they support Geneva II, but actually do not want it to succeed. Nevertheless, this conference offers a realistic, though not 100 per-cent chance of achieving piece in Syria. If the participants manage to make use of this chance, that would not only bring relief to our friends the Syrian people, but also help to normalize the situation in the region and the international situation in general. It would strengthen the principles of honest and equal partnership in international affairs."

Many of the delegates from the 40 participating states noted Russia’s decisive role in organizing the Geneva II conference. In their opinion, most of the credit for the Syrian parties’ attendance belongs to Russian diplomacy.

“Ever since the outbreak of the crisis in Syria, Russia has consistently advocated the premise that this crisis cannot be resolved through the use of force, and that the only solution is for the Syrian government and the opposition to find some kind of mutual agreement,” Lavrov said.

That is exactly the approach that forms the basis of the Geneva communiqué of June 30, 2012. That communiqué was unanimously (albeit belatedly) approved by the U.N. Security Council in Resolution 2119 as the international legal framework for achieving piece in Syria.

As part of its efforts as a mediator, Russian officials have on several occasions met delegations from the Syrian government and from the Syrian opposition, both internal and external. Speaking in Paris only a week ago, Lavrov was trying to convince Ahmed al-Jarba, the head of the National Coalition of the Syrian Revolutionary and Opposition Forces, of the need to attend Geneva II.

In the end, al-Jarba arrived in Montreux. Addressing the conference, he demanded that the Syrian government delegation confirm its commitment to setting up a transitional government.

“I urge the Syrian delegation immediately to sign the Geneva communiqué to ensure the transfer of all powers — including executive and military — from President Assad,” al-Jarba said. In his opinion, this should be the first step towards building “a new Syria.”

The head of the Syrian delegation, Foreign Minister Walid Muallem, asked the leader of the external Syrian opposition — and State Secretary John Kerry too, for that matter — to remember that no-one has the right to declare whether the Syrian government is legitimate or not, except the people of Syria.

“Our task here is to convey the will of the people, not to decide their fate,” he stressed. He added that any results achieved at the Geneva II conference would be put to a national referendum in Syria. “That way the Syrian people will have the last say, and they will determine their own future.”

Hundreds of Syrians from all over Europe came to Montreux in order to support Muallem. In the morning they gathered outside the conference press center, holding Syrian national flags and portraits of Bashar Assad.

The police did not try to disperse them. Nevertheless, bitter exchanges between the two Syrian factions continued the whole day long, both in the conference hall and outside.

“No-one had actually hoped that any agreements would be reached during the early stage,” Lavrov told Russian journalists after the first day’s meetings. “Predictably, the parties to the conflict have made emotional mutual accusations. But the main thing is that both of the Syrian delegations and all the other participants have reiterated the need for a purely political settlement, and expressed their strong belief that the inter-Syrian talks should begin as soon as possible.”

On January 24 the two delegations from Syria will gather at the Palace of Nations in Geneva to produce a program of implementing the agreements reached at the Geneva I conference, including the clause that calls for a transitional government to be set up.

The first round of the talks is expected to last for 7 to 10 days. After that the parties may pause for a break. Lakhdar Brahimi, a special U.N. and Arab League envoy and a very experienced negotiator, will be acting as a mediator.

“Diplomats representing the two countries that initiated the conference, Russia and the United States, will also work in coordination with Brahimi,” a source in the Russian delegation told RBTH. “They will provide whatever assistance they can to the Syrian negotiators.”

The rest of the Geneva II participants have already gone home; they will be carefully following the progress of the talks in Geneva from their own countries. Ban Ki-moon, John Kerry and the French foreign minister, Laurent Fabius, said they would be heading for Davos, where the 44th World Economic Forum opened on Wednesday.

According to reports obtained by RBTH, the Russian and U.S. delegations at Davos will discuss an impressive package of documents that aim to take economic cooperation between the two countries to a whole new level.