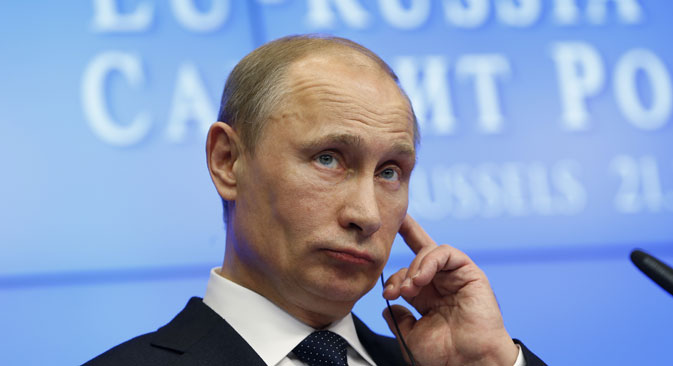 The 32nd Russia-EU summit is likely to become the most difficult one in the history of Russia's relations with its European partners. Source: Reuters

Relations between Moscow and Brussels have hit a dead-end. Issues such as visa-free travel and gas contracts will top the agenda at this week’s summit.

The Russia-European Union summit scheduled for January 28 in will follow a reduced format, does not have a set agenda and does not envisage any documents to be signed at the end of it. The main points of disagreement between the parties are: the situation in and around Ukraine; the issue of visa-free travel, which remains unresolved for 10 years already; and lawsuits over gas contracts.

The 32nd Russia-EU summit is likely to become the most difficult one in the history of Russia's relations with its European partners. That much is evident from the change of dates and adjustments to the established format, as Brussels has proposed cutting the duration of the event from two to one day and canceling the traditional dinner with President Vladimir Putin.

In the end it was decided that a plenary session with key ministers and EU commissioners will be dropped. What remains are Putin's talks with EU leaders, followed by a working lunch in the same format and a news conference.

Another unpleasant surprise is that the talks and the working lunch will be held without a set agenda, according to Yuri Ushakov, a Russian presidential adviser on foreign policy issues. No signing of documents at the end of the summit is planned, either. Yet both sides can raise any issue for discussion.

Asked by Gazeta.ru whether indeed Russian-EU relations have hit a dead-end, Ushakov diplomatically replied that time had come to discuss, in a narrow circle of participants and in an informal atmosphere, "where we are and what concerns each of the participants in the meeting has."

"We think it's high time we had a frank and detailed discussion of the full range of issues, including a joint vision for the future of Russian-EU relations. We are convinced that the potential for cooperation is not used to the full and there are considerable untapped reserves," Ushakov said.

According to him, the sides may touch upon the issue of Ukraine's integration, which has provoked mass unrest in the country. The situation around Ukraine is not the only difficult issue that may be raised at the summit.

Ushakov suggested that the events in Kiev should be considered in the context of the whole integration process currently under way in Europe and in the former Soviet Union. "Both integration models – the European and the Eurasian one – are based on complex principles and [World Trade Orgnaization] norms, and we believe that these two projects are complementary rather than mutually exclusive," he added.

Ukraine is not the only thorny issue

In addition to the growing confrontation between the authorities and the opposition in Ukraine, Russian-EU relations have been complicated by at least two more issues: disputes over gas contracts and failure to introduce visa-free travel between Russia and the EU.

Talks on the latter have lasted for more than 10 years now. Russia has more than once stated that it has complied with all the terms of the relevant roadmap. Yet the European Union is stalling the opening of its borders in fear of a rise in illegal immigration.

"These fears are not entirely unjustified, given that Russia has opened its borders as part of the Customs Union and has some 10 million semi-legal immigrants from Central Asia working on its territory, who could rush into Europe," an expert with the Russian Management School, Pyotr Travinsky, said.

According to him, the EU is not opposed to canceling visas for Russians but is afraid that as a result, Europe will be inundated with labor migrants from Tajikistan, Kazakhstan, Kyrgyzstan and the North Caucasus.

And yet President Putin has not given up the hope to reach an agreement with the EU on visa-free travel or at least on easing the existing rules. By way of an argument in his favor, he cites the fact that Europe has already introduced visa-free travel with many Latin American countries, where the crime situation is often worse than in Russia.

Last but not least, there are disagreements over the application of the so-called Third Energy Package to the construction of the South Stream gas pipeline and the European Commission's antimonopoly probe against Gazprom.

Late last year the Russian Energy Ministry received an official letter from the European Commission requesting it to review contracts that had been signed with the transit countries for the construction of the South Stream pipeline.

The European Commission maintains that bilateral agreements on that pipeline signed with Austria, Bulgaria, Hungary, Greece, Slovenia, Croatia, and Serbia are in violation of EU regulations.

There can be no breakthrough in resolving this issue, said Aleksey Grivach, deputy head of the National Energy Security Fund.

"The European Commission is trying to change, on the hoof, long-term commitments arising from bilateral agreements. But the European Commission is currently not in a position to dictate its terms, given that Gazprom is the most reliable supplier of gas into Europe and is filling in the gaps resulting from lack of stability on the part of other suppliers," Grivach said.

Intergovernmental agreements signed by countries participating in the South Stream project will not be cancelled or revised, Vladimir Chizhov, Russia's envoy to the EU said on Friday.