No decisions, but progress at EU-Russia summit 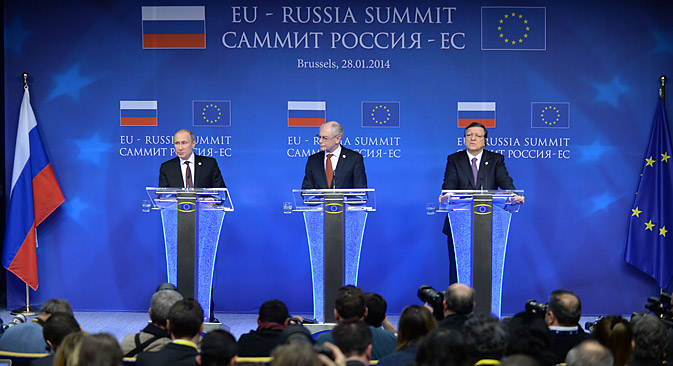 Despite pessimistic forecasts going into the latest EU-Russia summit, the two sides were able to discuss their differences, and demonstrated their willingness to pursue further dialogue on key issues. For Russia, one of the most important outcomes of the meeting was the decision that EU and Russian experts will start discussing the economic repercussions of closer trade ties between the EU and the Eastern Partnership states.

The ongoing crisis in Ukraine cast a shadow over the summit, which was already expected to be contentious. As the summit opened, the future of the new partnership agreement between Russia and the EU was uncertain. After the meetings were over, however, it was clear that talks on the document will continue, perhaps as soon as the next EU-Russia summit on July 3 in Sochi, according to reporting from Russian daily Vedomosti.

Experts from both sides will also exchange opinions before the next round of talks. At a press conference at the end of the summit, Russian President Vladimir Putin said: “We have agreed with our European partners that it would be extremely useful for our experts to exchange their views and discuss what kind of consequences any decisions in this area would have on the state of the Russian economy.”

Putin added that experts could also discuss the formation of a free trade area between the EU and the Eurasian Economic Union, although First Deputy Prime Minister Igor Shuvalov later clarified that official talks on the subject were not on the agenda for now.

Nevertheless, President Putin was fairly optimistic in his statements at the summit. “We are making very clear and obvious progress,” he said. Putin did complain about new anti-dumping measures against Russian exports and problems with the Third Energy Package, but said that the differences were purely technical.

European Commission President Jose Manuel Barroso’s statements also took a conciliatory tone. Barroso said that the summit was held in a spirit of openness and frankness. Among the differences between the two sides that still remain to be resolved, Barroso mentioned the question of overflight charges for European airlines in the air traffic corridor over Siberia.

Sergey Utkin, head of the European Integration Studies department at the IMEMO RAN Institute of World Economy and International Relations in Moscow said that overall the summit went unexpectedly well. In his opinion, the most important outcome of the meetings was the agreement to launch the dialogue between Russian and EU experts on the Eastern Partnership program. Utkin also welcomed President Putin's statement on the prospects for free trade between the EU and the Eurasian Union, saying that such a move could significantly defuse tensions between the two sides in the future.

On the subject of Ukraine, Putin said that Russia was not planning to review its agreement with Ukraine to lower the gas prices or to extend the $15 billion loan. “Our willingness to help Ukraine by extending the loan and by lowering, albeit step-by-step, the gas charges is based on the need - and on our desire - to support the Ukrainian people rather than any specificUkrainian government,” Putin said.

He did, however, make some reservations. "Yes, we have already agreed on everything. But it is crucially important for us that Ukraine remain credit-worthy. We want to have guarantees that our money will be repaid," Putin said. Putin also reacted angrily to information from the European side that an EU high representative would soon pay a visit to the Ukrainian capital.

Putin called such a visit equivalent to Russian Foreign Minster Sergei Lavrov arriving in Cyprus or Greece at the height of the crises in those countries “and making various strong statements there."

Another issue discussed between the parties was the question of easing visa restrictions for the Schengen Zone. Moscow had hoped to sign an agreement, but Brussels said that more consultations were required on the document. One of the key obstacles is Russia’s demand for the EU to give it access to personal data of air passengers traveling from Europe.

Brussels reiterated that visa-free travel between Russia and the EU is not going to happen any time soon.