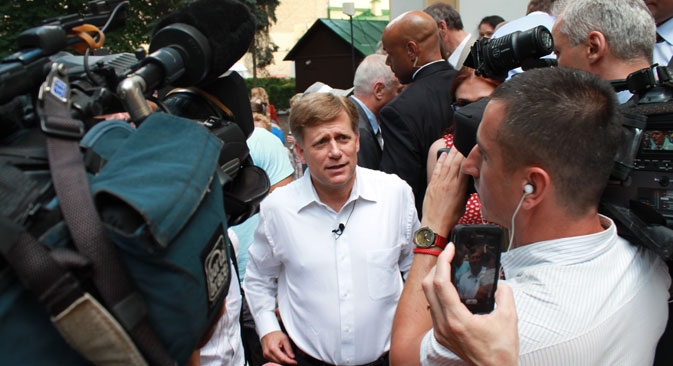 U.S. Ambassador to Russia Michael McFaul announced his resignation on his own blog, saying he plans to leave shortly after the 2014 Sochi Olympics.  McFaul said his primary motivation is to rejoin his family in California.

“I simply need to be with my family again,” he explained. “Anyone who has followed my blogs over the last two years knows how deeply I value my time with my wife and sons.  It’s time for us to be reunited.”

Yet according to Jeffrey Mankoff, fellow with the CSIS Russia and Eurasia Program and a visiting scholar at Columbia University, “there is also a political context” to McFaul’s departure.

“With U.S.-Russian relations in something of a down period, major agreements with Russia are not likely to be a priority in the near future, meaning there is not likely to be much McFaul could accomplish if he stayed,” Mankoff told Russia Direct.

Fyodor Lukyanov, Head of Council of Foreign and Defense Policy, believes that McFaul was named U.S. Ambassador to Russia because of his support for the U.S.-Russia reset initiative.

“When he was appointed in 2011, there were hopes that he would develop what had already begun in U.S.-Russia bilateral relations,” Lukyanov told Russia Direct.

“Yet everything changed because the situations in Russia and in the United Stated changed. He failed to get his program in Russia off the ground. And this reduced his interest in working in Russia. He had a clear vision about his goals in Russia, but understood that it is difficult to achieve these goals in new political conditions. ”

Lukyanov points out to the fact that McFaul is not a career diplomat. He initially he had problems in adjusting to working in Russia, Lukyanov said.

“As a person who is used to a different style, he had some difficulties in adjusting to the role of the Ambassador. Yet afterwards he behaved like a professional diplomat,” Lukyanov said.

The last blog of the U.S. Ambassador to Russia

Gregory Feifer, a former NPR correspondent in Moscow, writer and expert in U.S.-Russia relations, sees the Russian authorities' treatment of McFaul as “deplorable.”

“I'm sure he'll be relieved to leave behind the personal attacks and obstruction that must have made his two years as ambassador very difficult indeed,” he said. “The irony for Russia is that although the attacks have served President Putin's personal political ambitions, they've helped quash a great opportunity for the country to become a responsible member of the international community.”

The Reset: McFaul’s legacy in Russia

Feifer said McFaul “crafted the "reset" – a sober policy, both realistic and idealistic at the same time – aimed at improving relations.” McFaul “then worked to put it in place,” Feifer added. It was a matter of time until he'd felt he'd done what he could before returning to university life.

“The reset never promised an improvement in relations. That's often misunderstood,” Feifer said. “It was a last-ditch effort to get Moscow to stop viewing foreign policy as a zero-sum game, and it succeeded in producing nuclear arms and nuclear energy deals as well as cooperation in some other areas. In that sense, it's by no means a failure.”

Likewise, Steven Pifer, director of Brookings Arms Control Initiative and senior fellow at Center on the United States and Europe, doesn’t see the reset as a failure.

According to him, the major achievements of the “reset” were the completion of the New START Treaty, greater cooperation on Iran (including agreement in the UN Security Council in 2010 to a new resolution that imposed an arms embargo on Tehran), enhanced cooperation in facilitating logistical support for U.S. and NATO forces in Afghanistan, the entry into force of a civil nuclear cooperation agreement (with Russian accession) to the World Trade Organization.

What could be a future occupation for McFaul? What is the future for U.S.-Russia relations? Read more experts’ opinions in the full version of the story at Russia Direct.