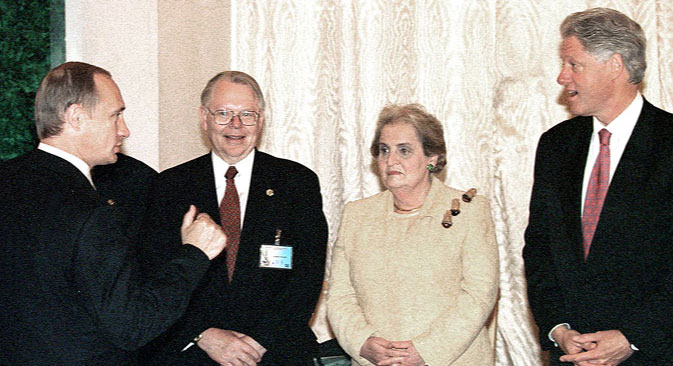 As outgoing U.S. ambassador Michael McFaul prepares to leave Russia after two years’ service - the shortest tenure for any American ambassador since the 1990s - one of his predecessors, Ambassador James F. Collins, said that the new Moscow man will likely be a career diplomat.

“I personally would believe, that in this latter part of the Obama administration and Mr. Putin’s administration, a career person has a lot of things he can bring to the job," Collins, now a senior associate of the Russia and Eurasia program at the Carnegie Moscow Center, said in an interview last week.

Collins, who occupied the famous Spaso House U.S. Embassy residence in Moscow during the late Yeltsin era and the first year of Vladimir Putin's first presidency, said while he has no insight into the identity of McFaul's replacement, the U.S. might need a trained State Department bureaucrat to do the job.

"I think this period will not be about big initiatives and new departures and policy. It is going to be about making the most of the relations that are working at the moment and trying to make sure that we don’t miss opportunities to do things which are productive," said Collins, who unlike scholar McFaul, has spent most of his career working for the State Department.

McFaul, a welcoming and often charming Montana native, was the only political appointee to serve as ambassador after Robert Strauss, a well-connected politician and businessman and a personal friend of former U.S. President George H. W. Bush.

While it is hard to compare Strauss, a long time Washington insider from the Lyndon Johnson era, with McFaul, a liberal Californian professor, the latter was also well connected to President Barack Obama, to whom he acted as a close adviser on U.S. Russian policy.

Speaking about Strauss, Collins said that as a political figure and a person who shared a good relationship with both George H. W. Bush and former Secretary of State James Baker, he "did things that a career diplomat couldn’t have done."

But despite more than a decade having passed since Collins left his job as U.S. Ambassador, not much has changed within the inner circles of Russian diplomacy, which continues to prefer old-fashioned channels of communication.

"Frankly, Russia still expects an ambassador to work with the government of the Russian Federation. In order to do that, you need to be able to have a discussion with those people and have their confidence. Essentially, you have to be aware of the way in which you can do this most effectively," Collins said.

Collins said that in order to form an opinion about events in Russia, he travelled extensively around the country and met with various representatives of the Russian population, from regional governors and local businessmen to members of the political opposition and NGO activists: "I felt it was very important as an ambassador to speak with all segments of the Russian population and understand what their views are," Collins said.

McFaul did likewsie, but though most of his time in Russia coincided with the tenure of a more liberal president (Dmitry Medvedev), his interaction with opposition leaders often irritated Russian diplomats and senior officials.

Once, after a meeting with opposition activists, McFaul was even harrassed by reporters from state-controlled television channel NTV.

Collins believes that this was very unwise on the part of the Russians: “The Russian government’s personal attacks on McFaul, trying to limit his access to people, made it very difficult to do the job. I never had that, and I don’t think that most of my other successors and predecessors had it during the post-Soviet period. If you are limited in your access to people, it makes it difficult to do your job effectively," he said.

And I think the Russian side loses the ability to have someone to talk to who can explain American policy and what’s going on in the U.S.," he added.

Collins was echoed by the Center for Strategic and International Studies fellow Jeffrey Mankoff, who said that the Russians could have made more use of McFaul if they had treated him differently: "He is close to President Obama, and so the poor reception he received from the Russian government inevitably filtered back to the president and helped set a negative tone for the overall relationship," said Mankoff, who is deputy director of the center’s Russia and Eurasia program.

However, Mankoff also said that McFaul had "occasionally said things that raised unnecessary hackles in Moscow," he said.

According to Collins, choosing the proper language is one of the most important issues for an ambassador: "Any ambassador has to understand that he is a public figure and how he speaks and what he says is never personal and is always official," he said.

Collins added that the way a U.S. ambassador’s words are interpreted by the other side is the key factor which determines "if he is going to be effective or not effective in explaining the [position of the] United States," he said.

"An ambassador is a representative of the President and of the U.S. government and if he is not doing his job well and he is not effective and he is not representing the words and views of his government, he normally doesn’t stay very long," he said.