Lavrov calls on West to condemn 'extremists' among protestors in Kiev 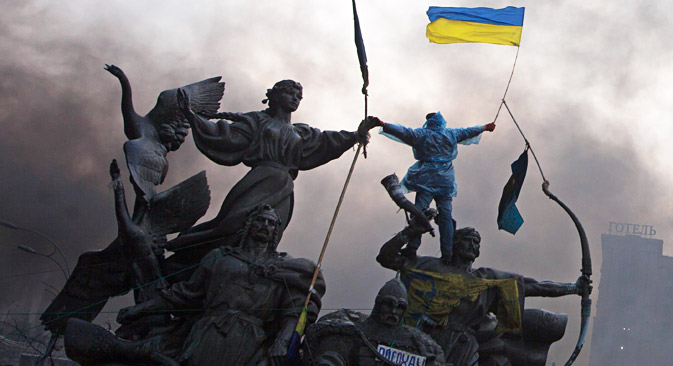 Russia’s president, prime minister and foreign minister all spoke out against the violence in Kiev on Thursday and now wait for details of an accord intended to restore peace.

An agreement between the Ukrainian government and opposition leaders has supposedly been reached, with a signing scheduled for 12 p.m. on Friday. There are no details at the moment about the agreement, which comes a day after Russian officials harshly condemned Western actions related to the country.

Russian Foreign Minister Sergei Lavrov said on Thursday that Western calls to hold early elections in Ukraine and the imposition of sanctions are attempts to impose the EU’s will on the country.

Lavrov’s request to Western governments to stop supporting the protestors echoed the demands made by President Vladimir Putin in a telephone conversation with German Chancellor Angela Merkel to stop pressuring the Ukrainian authorities and condemn the violence done by protestors in Kiev.

“Demands are sounding from Western European capitals to give the Ukrainian people freedom of choice – but they quickly add that the choice should be made in favor of Europe, in favor of the European Union,” Lavrov said at a news conference in Baghdad.

"The goal in fact is to impose this choice on the Ukrainian leadership. This is evident in the initiatives now being put forward – namely, to hold parliamentary and presidential elections as soon as possible. In other words, Ukraine's choice has already been made for it in the West,” Lavrov continued.

Lavrov also said that the West and the Ukrainian opposition should disassociate themselves from extremists who could be taking advantage of the situation.

“Our position is also that all external players and the Ukrainian opposition must decisively and immediately distance themselves from extremists and other radicals,” he told Russian news agency RIA Novosti.

Lavrov also made it clear that the U.S. threat to apply sanctions against Ukraine is blackmail and a manifestation of double standards.

"The opposition is either unable or unwilling to disassociate themselves from extremists. The U.S. is putting all the blame on the Ukrainian authorities - and this is a double standard,” Lavrov said, noting that imposing sanctions on the country could encourage militants. The EU imposed sanctions on 20 Ukrainian leaders on Thursday.

Lavrov also criticized the coverage of the crisis in the Western press. “The situation is being presented in a distorted form in the Western media; they are reporting that the West is urging the government not to attack the protesters on Maidan. But there’s a Maidan they prefer not to talk about: police being pelted with Molotov cocktails, killings, building being seized – none of that is commented upon or explained,” Lavrov said.

Earlier in the day, in a phone call with German Chancellor Angela Merkel, Putin called on the West to harshly condemn extremists among the opposition in Kiev and stop blaming the Ukrainian authorities.

According to a statement by the Kremlin press service, “Putin stressed the importance of the Western countries refraining from making accusations against the Ukrainian government, as well as the importance of strongly condemning opposition forces suspected of organizing illegal, extremist and terrorist acts.”

The statement added: "Putin and Merkel expressed their joint view of the need for urgent action to help stabilize the situation in Ukraine.”

Meanwhile, Prime Minister Dmitry Medvedev said that Russia would strive to fulfill all its agreements with Ukraine, but for full cooperation to be possible, the authorities in Ukraine must remain in control of the situation.

"Of course, we’ll continue to cooperate with our Ukrainian partners in all the previously agreed areas, and we’ll try to do everything to keep the promises we have made to them. At the same time, it’s vital for these partners to stay in good shape, and for the authorities in Ukraine to be legitimate and effective, and not a doormat for everyone to wipe their feet on,” Medvedev said at a government meeting on Feb. 20.