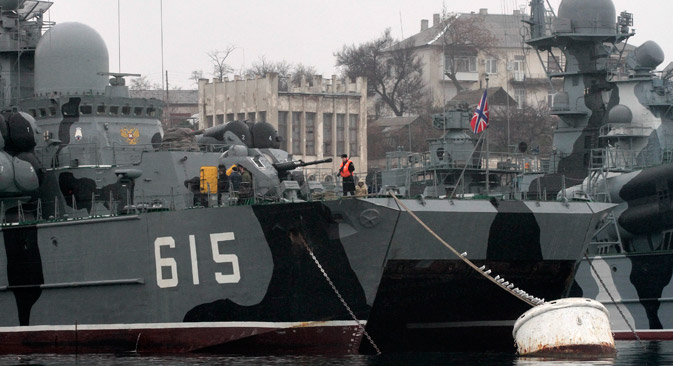 Russian military vessels are anchored at a navy base in Sevastopol, on Feb.27. Source: Reuters

Foreign Ministry issues a statement asking for cooperation while Ministry of Defense denies any link between military drills and Ukraine.

A week after an agreement was signed bringing an end to the standoff between protestors at the government of Viktor Yanukovich, Russia is calling for all parties to honor the agreement.

The Russian Foreign Ministry issued a statement pointing out several ways the agreement is not being respected. “Militants have failed to surrender their weapons. They have not vacated government buildings, and they are announcing their plans to 'restore order’ all across Ukraine,” the statement reads in part.

Russia has also warned against “further polarization of society as a result of actions by radicals." In particular, Russia is concerned about the repeal of a 2012 law that allowed regions to adopt more than one language for official use.

However, Russian politicians do not think that a break-up of Ukraine would be in Moscow's interests. Mikhail Margelov, head of the foreign affairs committee of the Federation Council, Russia’s upper house of parliament said that he has not heard calls for separation, even from pro-Russia Ukrainians.

“Last Thursday I was in Kharkiv, attending a congress of members of local councils representing Ukraine's southeastern provinces and Crimea,” Margelov said.

“Some journalists have dubbed the event ‘a Congress of separatists.' I insist that such comments are wide of the mark. I did not hear any separatist calls there. I heard statements by responsible politicians who care about Ukraine’s territorial integrity, about Ukraine’s development and modernization, about rooting out corruption, and about the future of Ukraine as a single state – albeit, perhaps, in the form of a federation or confederation.”

Margelov’s calls for caution are in contrast to the comments by some experts. Konstantin Zatulin, head of the Institute of the CIS Countries in Moscow, said in an interview with the Moskovskiy Komsomolets newspaper that Moscow "will not allow reprisals" against ethnic Russians in Crimea, although he added that members of the Crimean parliament and the Sevastopol city council should enter into talks with the new Ukrainian government to bring the situation back to normalcy.

Likewise, Petr Akopov, an observer with the conservative newspaper Vzglad, said, “If there is bloodshed in the city (of Sebastopol), Moscow will not be able to stand idly by, for both foreign-policy and domestic-policy considerations.”

However, Akopov stressed that his preference would be a united, but pro-Russia Ukraine. “Based on the long-term interests of the Russian people and state, we need the entire republic (of Ukraine) once again to become Russia’s ally, as opposed to using the turmoil to snatch Crimea or some border territories. We still have the chance to achieve that goal.”

Meanwhile, the Russian Ministry of Defense has denied any link between the snap drills now under way in Russia and the developments in Ukraine. According to Defense Minister Sergei Shoigu, the scale of the drills is very large, so some individual elements may take place in the direct vicinity of Russian borders, including the border with Ukraine.

Shoigu categorically denied, however, that the drills were meant to send some kind of signal to Russia’s neighbors. "The fantasy of our experts, including military experts, knows no bounds," Shoigu said.

On Thursday, the Moskovsky Komsomolets newspaper cited a source in the Russian Ministry of Defense as denying reports about any movements by the Russian marines' heavy weapons in Crimea.

"The Black Sea Fleet is not involved in the snap drills now under way. So far, there has not been a single photo showing this alleged heavy armor on the move. This is probably just a piece of deliberate misinformation," the paper reported.

The Foreign Ministry also expressed a desire to work with foreign partners to reduce the tensions in Ukraine, within reason.

“We are ready for cooperation but only based on a clear understanding that this must be honest cooperation. Agreements must not only be signed - they must also be honored, and they must take into account the interests of the entire Ukrainian people, as well as the interests of all the partners of Ukraine," read the Foreign Ministry’s statement

The Foreign Ministry statement added that while Western countries have also called for cooperation with Russia, the request sounds hollow given recent statements from the NATO secretary-general to the effect that NATO membership must remain among the main objectives of the government in Kiev.

"We strongly advise that everyone desist from provocative statements and respect Ukraine's non-aligned status, which is confirmed in the Ukrainian bill on the founding principles of domestic and foreign policy," read the Foreign Ministry’s statement.

Based on reporting from Moskovsky Komsomolets and Vzglyad.