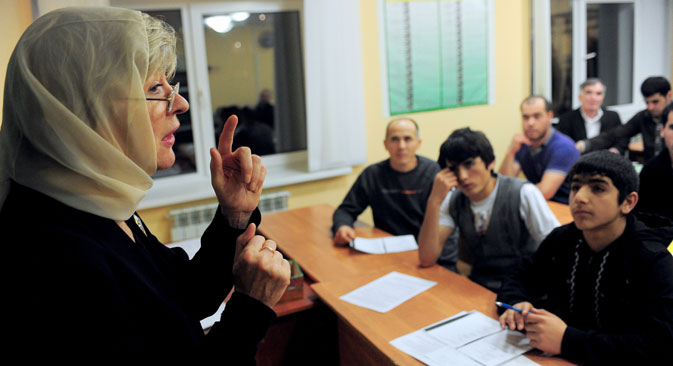 In Russia they have already launched two adaptation centers in Tambov and Orenburg. Source: ITAR-TASS

Special “adaptation centers” are to be established for migrants in Russia, according to a new draft law. The new centers will prepare foreign workers for integration into Russian society. Are such organizations really in the interests of Russians and migrants?

The number of foreigners who visited the Russian Federation in 2013 exceeded 17.5 million people, considerable numbers of whom were arriving in search of work. In order to successfully integrate migrant workers into Russian society, the Federal Migration Service has decided to create special centers to help migrants with social adaptation.

The new draft law “On the adaptation of foreigners” stipulates that the basic principle of social and cultural adaptation and integration is the knowledge of the Russian language, laws and culture. The problem of familiarizing migrant workers with all of the above will be solved by creating special centers for migrants.

According to the authors of the draft law, such an approach will reduce ethnic tensions and combat the segregation of migrants, and will also create conditions for the effective protection of the rights and legitimate interests of foreign guests. This aims to provide them with a safe and comfortable stay in the Russian Federation, as well as reduce the level of illegal migration.

As a pilot project, in Russia they have already launched two adaptation centers - in the cities of Tambov (480 kilometers south-east of Moscow) and Orenburg (in the south Urals). The center in Tambov is designed for 88 people, and the one in Orenburg for 100.

Migrants live in the premises of the centers and have the opportunity to work. Twice a week in the evenings they have Russian language classes and once a week – Russian history and the basics of Russian legislation.

The centers consist of dormitories for male foreigners aged 20-40, who should preferably have at least a secondary education. Accommodation for families is not provided.

Tatyana Alexeyevna Bazhan, the author of the draft law, noted that the exact length of time a migrant needs for adaptation will be determined by the results of the pilot project. “Our task is to determine, with the help of experts, how long it takes a foreigner to learn the Russian language, history and laws of our country. After the experiment, we will know exactly how to develop competent and professional work on the adaptation and integration of foreigners,” she said.

FMS employees have indicated that if the experiment proves successful, similar centers may be opened throughout Russia.

Regarding the funding of the centers, Bazhan emphasized that they already have basic material and financial resources. In particular, the adaptation centers in Tambov and Orenburg have been organized in temporary centers for displaced people, which had previously been only one-third full.

The migrants’ accommodation expenses are paid for by their employers and the learning process is organized at the expense of the Russkiy Mir Foundation.

Viktor Buyanov, senior advisor to the executive director of Russkiy Mir, pointed out that Russian is taught to the migrants by highly professional philologists - an agreement has been concluded with the Derzhavin Tambov State University and Orenburg State Pedagogical University to this purpose.

The training of foreign workers in the centers is being conducted by university professors, whose work is sponsored by the foundation. Moreover, even migrant workers who do not live in adaptation centers but have a desire to learn the Russian language have free access to these classes.

In addition to facilitating adaptation, the centers can help migrants obtain a temporary residence permit in Russia – the FMS is now considering the possibility of granting such privileges.

According to human rights activists, the establishment of such centers is justified, but only if participation in the program is voluntary.

“I have a very positive attitude to this. It’s great that there’s a place where the migrant can live, where he will learn history and the Russian language, where he will be given legal advice - and all this for reasonable money. I am worried only about the fact that people might be herded by force into these centers,” says Svetlana Gannushkina, a human rights activist and Chairman of the Civil Assistance Committee.

The question is whether the migrants themselves need this initiative. According to Sergei Boldyrev, an employee of the Labor Migration International Alliance, foreign workers who are now receiving training in the pilot centers in Orenburg and Tambov may only be interested in a place to stay.

Vladimir Mukomel, the head of the study of migration and integration processes under the Institute of Sociology of the Russian Academy of Sciences, has a different view. According to him, up to one third of migrant workers live in Russia illegally, often because it is difficult to get legal permission to work. Therefore, economic adaptation for migrants is much more important than cultural.