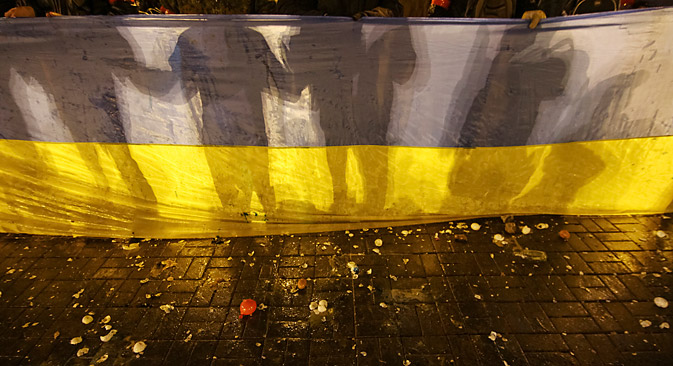 Russia’s road map asks that the U.S. and the EU respect Crimea’s right to self-determination as expressed in the March 16 referendum. Source: Reuters

Russia’s Foreign Ministry has issued a statement outlining a path forward for Ukraine as a non-aligned federation.

In a statement issued by the Ministry of Foreign Affairs on March 17, Russia outlined a road map for the international community to use in stabilizing the situation in Ukraine. The suggestions included the creation of a support group for Ukraine made up of the United States, the EU and Russia; a recognition of the Crimea referendum; and the writing of the new Constitution followed by elections based on it.

The statement was particularly clear on the guidelines for the support group, should the U.S. and the EU agree to participate. According to the statement, the group must respect the interests of all the national groups living in Ukraine, including the right to use their native language and foster broad ties with their compatriots. Special emphasis was also given to “the inadmissibility of the revival of neo-Nazi ideology” and the necessity for Ukrainian politicians to disassociate from ultra-nationalist groups. Finally, participants of the group must take into consideration the “mutual interests of all states” in the Euro-Atlantic region.

The first is the immediate implementation of the obligations of the Feb. 21Agreement, including the seizure of illegal weapons, liberation of illegally occupied buildings and streets, and objective investigations into the acts of violence that occurred between December 2013 and February 2014.

Crimea vote a reality check for the West

Second is the convention of a constitutional assembly with equal representation from all regions of Ukraine. The purpose of the assembly will be to prepare a new constitution that will ensure the transformation of Ukraine into a democratic federative state with a neutral military-political status.

Russia made several suggestions as to the contents of the new constitution. These suggestions include special provisions for languages other than Ukrainian, particularly giving Russian the status of a second official language; and giving regions the ability to elect their legislative and executive authorities by direct vote. Regions should also have authority to make policies that take into account their unique cultural and historical backgrounds.

The third point of the plans is national elections for Ukraine’s federal governing bodies and elections for legislative and executive positions in each region to be held immediately after the new constitution is adopted.

Russia’s road map also asks that the U.S. and the EU respect Crimea’s right to self-determination as expressed in the March 16 referendum, in which more than 96 percent of participants voted to separate from Ukraine and become part of the Russian Federation.

U.S. and EU unlikely to go along

Nikolai Kaveshnikov, head of the Department of European Integration at the Moscow State Institute of International Relations (MGIMO) said that Russia’s plan has some constructive points. In his opinion, requiring Ukraine to be a non-aligned federation is necessary given the country’s diverse population. However, Kaveshnikov is skeptical about the reality of creating a “support group.” “The events of the past week have shown that our American and European partners have embarked on a course of unconditional support for the new powers in Ukraine irrespective of their insufficient legitimacy and ties to extremists. Given the unwillingness of our American and European partners to recognize the right of Crimea to self-determination, I do not foresee the plan proposed by Russia being implemented,” Kaveshnikov said.

He added that the reaction of the authorities in Kiev to the proposal can also easily be predicted. “If we take into account all of their former actions, starting with attempts to change the law on the status of languages, instead of searching for a national consensus, the Kiev politicians are trying to impose the views of the western regions of the country on the entire Ukrainian people,” Kaveshnikov said.

In Kaveshnikov’s opinion, these actions were hasty and an example of the dangers of acting without considering all the possibilities – particularly in this situation.

“What is needed today is the careful and balanced actions of all sides within Ukraine and all countries interested in the stabilization of the situation. Further escalation of the conflict will have tragic results for Ukraine and the situation in the region as a whole,” said Kaveshnikov.