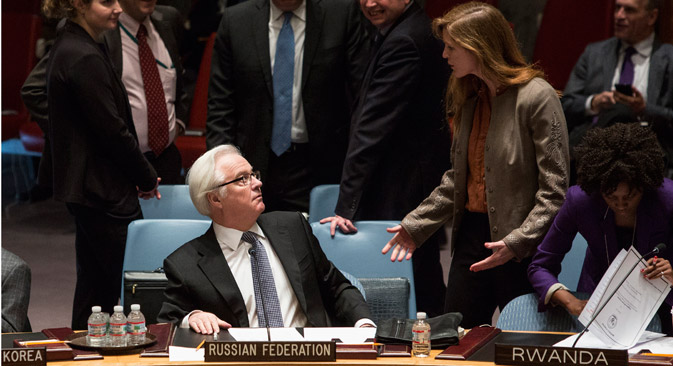 US ambassador Samantha Power (right) and Russian ambassador Vitaly Churkin at the United Nations before Russia vetoed a resolution condemning the referendum in Crimea. Source: Reuters

Europe and the United States are reacting to the crisis in Crimea with proposals that could have unexpected consequences.

The United States extended its sanctions against Russia over the crisis in Ukraine to include leading Kremlin officials and business figures alleged to have ties to President Vladimir Putin.

President Barack Obama signed an executive order to impose visa restrictions and freeze any US assets of 20 more top officials and business people as well as Russia's 17th largest bank, Bank Rossiya, which was described as "the personal bank for senior officials of the Russian Federation".

US Treasury officials said that the sanctioned individuals would be unable to make use of any US financial services. The officials named included Sergei Ivanov, the head of the presidential administration, Sergei Naryshkin, the Speaker of the Duma, and Vladimir Yakunin, the head of Russian Railways, as well as Sergei Mironov, the leader of the Just Russia party.

Prominent business figures targeted included Gennady Timchenko, co-owner of the oil trader Gunvor, who announced after the sanctions were imposed that he had sold his 43 per cent share in the company to his business partner Torbjorn Tornqvist to ensure "continued and uninterrupted operations". Yuri Kovalchuk, head of Bank Rossiya, and businessmen Arkady and Boris Rotenberg, who are reported to be friends of Mr Putin, were also placed on the list.

US officials said that Bank Rossiya would be "frozen out of the dollar" after Mr Obama said that the bank provided "material support" for people on the sanctions list. Visa and Mastercard blocked operations for clients of the bank through their card payments systems in response to the sanctions.

RBTH editor: The newfound uncertainty of life in Russia

Russia's stock market reacted badly to the sanctions, losing 3 per cent of its value on Friday, while the rouble also slipped against the dollar. A separate executive order also warned of possible further US sanctions aimed at key sectors of the Russian economy, including energy, finance, defence and mining.

The European Union also added more 12 names to its list of people facing sanctions in protest at Russia's absorption of Crimea after a referendum in the peninsula to leave Ukraine in favour of unification with Russia.

German Chancellor Angela Merkel told journalists that the EU was ready to impose serious economic sanctions against Russia under a third phase of a planned response if there was any further escalation of Russia's actions in Ukraine.

Russia reacted strongly to the decisions of the US and EU. Foreign Minister Sergei Lavrov said: "Our US colleagues are telling themselves that they use sanctions in order to compel Russia to more closely cooperate on many international issues. This is quite a dirty approach because it is necessary to cooperate honestly and, since we are partners, our interests should be taken into account on all issues, which are on the agenda of the Russian dialogue with the West and the US in particular."

The Federation Council, Russia's upper house of parliament, adopted a statement calling on the US to impose sanctions on all of its members in a show of solidarity with Speaker Valentina Matviyenko, who was placed on an initial sanctions list. Deputy Speaker Ilyas Umakhanov said the statement was "a principled opinion about the impermissibility of political blackmail".

Russia has promised to respond to the actions of Washington and Brussels. Presidential spokesman Dmitri Peskov said the blacklists were "totally unacceptable" and that "it won't take Russia long to react".

The second round of sanctions followed earlier lists issued by the US and the EU that had provoked derision in Moscow for the limited range of people involved. One of those named, presidential adviser Vladislav Surkov, told a Moscow tabloid: “I don’t have accounts abroad. What interests me in the US are Tupac Shakur, Allen Ginsberg and Jackson Pollock. I don’t need a visa to access their work.”

The measures are ostensibly designed to induce Russia to reverse its policies towards Kiev and Crimea, but the jury is still out on the effectiveness of sweeping sanctions. A J Hughes Hallett and Andries S Brandsma argued in 1983, in their article How Effective Could Sanctions Against the Soviet Union Be? that “an across-the-board trade boycott, which follows the popular view of using sanctions as a retaliatory measure, would just reduce the West’s influence on the Soviet economy”.

When the Soviet Union dissolved eight years later, their scepticism about the role of sanctions in undermining the Soviet economy appeared ill-founded. However, research by Hufbauer, Schott and Elliott, Economic Sanctions Reconsidered, concluded that the collapse stemmed from internal inefficiencies rather than US economic sanctions.

Modern parallels with that situation were not lost on President Vladimir Putin. Addressing both houses of the Russian parliament on March 18, he noted: “Western politicians are trying to scare us not just by sanctions but by the spectre of rising internal problems. Do they count on a worsening of the social and economic situation in our country which would trigger off popular unrest?”

He reminded his audience that Russia had lived under a number of significant economic restrictions. In the Cold War, the US and other countries banned the sale of many technologies to the Soviet Union. The restrictions have been officially discontinued, admitted Mr Putin, but many are still active.

Matviyenko, the Federation Council Speaker, said that the interdependence of Russian and western economies made it impossible for the West to punish Russia without hurting itself.

A lot has been said about Europe’s dependence on Russian oil and gas, and of course it’s a two-way street. Any cut in Europe’s consumption of Russian raw energy would deplete Moscow’s coffers. But the biggest loser would be Ukraine, which is even more dependent on Russian gas than the EU, and not just for domestic and industrial use.

Ukraine earns up to $4 billion in fees for the transit of Russian gas to Europe. According to Aleksey Miller, chief executive of Russian gas giant Gazprom, Ukraine owes Russia about $2 billion for gas already consumed. 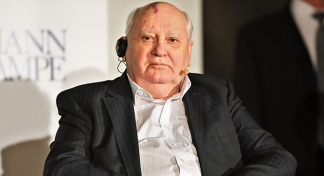 Mr Miller hopes Ukraine will settle the debt once it gets loans from the US, EU and IMF, and would be able to meet future bills. This would in effect mean the West paying Russia instead of punishing her.

Another example of the interconnections between Ukrainian and Russian interests is the Russian Black Sea Fleet base at Sevastopol. Moscow has paid Kiev up to $100 million a year for the lease. With the departure of Sevastopol from Ukraine, Kiev loses this income while Russia saves, says Georgiy Fedorov, director of the Aspekt centre for social and political research.

The same cannot be said about the people of south-east Ukraine, believes Konstantin Zatulin, director of the Institute of the Commonwealth of Independent States. The disruption of multiple and close economic ties between Russia and Ukraine’s industrial heartland would accelerate the collapse of Ukraine’s economy.

The ensuing hardship and mass protests would eclipse anything Ukraine has experienced so far. Mr Zatulin believes any future western sanctions will remain limited to punishing individuals in Russian business and political circles, the so-called “offshore elite” who do hold assets and interests abroad.

The aim, he says, will be to induce these people, the “fifth column” as he puts it, to mount pressure on the Kremlin to bow to western demands.

Yuri Boldyrev, former deputy head of Russia’s Audit Chamber agrees. As a prominent critic of the Kremlin’s economic and social policies, he laments the fact that the West will probably abstain from meaningful economic sanctions against Russia.

Russia needs a jolt to move away from its dependence on natural resources and start real development, he says. But this, he says, is not in the West’s interests.

Neither are the sanctions, believes Jack Matlock, US ambassador to the USSR from 1987-1991. Writing in The Washington Post on March 15, he concluded that “the US and Europe would lose to the extent that a resentful Russia would make it even more difficult to address global and regional issues such as the Iranian nuclear programme, North Korea and the Syrian civil war, to name a few.

Russian policy in these areas has not always been all the US desired, but it has been more helpful than many Americans realise. And encouraging a more obstructive Russia is not in anyone’s interest.”