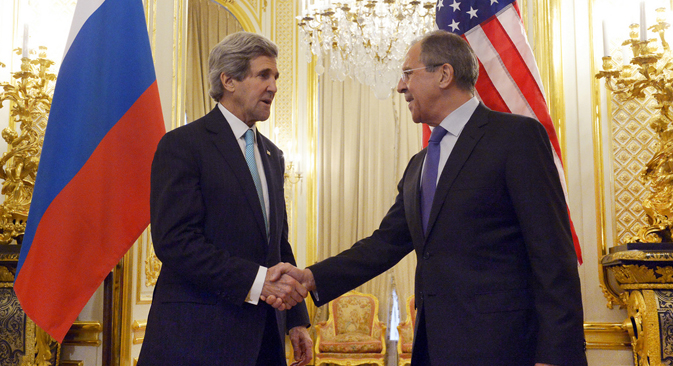 Following last Sunday’s talks between Russian Foreign Minister Sergey Lavrov and US Secretary of State John Kerry in Paris, which while constructive failed to provide a breakthrough in the Ukraine crisis, many Russia watchers are now asking the question: does Russia have a new diplomatic strategy?

After its unilateral action in Crimea, which is seen as “occupation” by the western powers and as “reunification” by the majority of Russians and their allies abroad, there seem two extremes of opinion in approaching this question. One is to say Moscow wants to recover its old Soviet might, even beyond the borders of the former USSR. The other is to say what happened in Crimea was an “unsuccessful improvisation”, and that it will soon be business as usual, with Russia grudgingly accepting the loss of former territories to the western sphere of influence – to the tune of talks about “expanding the zone of security and prosperity.”

The truth in these matters rarely lies in such black-and-white views but in the grey area in between. In the view of Rossyiskaya Gazeta, the operation in Crimea indicated a desire to draw the “contour of security”; ie, to mark the territories Russia considers of vital importance and where it will not ignore the creation of anti-Russian regimes and an unlimited build-up of the West’s military presence. Ukraine is one such territory. “But it does not mean that Russia plans to become a new planetary rival of the US, stepping into the shoes of the defunct Soviet Union,” says Fyodor Lukyanov, editor-in-chief of Russia in Global Affairs.

The problem is that this moderate view is not necessarily shared by people on the ground. And not only in Crimea, but also in other regions of Ukraine and neighbouring Moldova. Some even think that the return of the USSR is possible. “If we get back the country, you can keep the change,” says Valentina, a middle-aged woman at her bread and biscuit stall in Sudak, an ancient Crimean town.

Everyone I meet in Crimea talks about this mysterious notion: “Our country.” For older people this was clearly the Soviet Union; for the younger ones it looked like Russia; sometimes the picture was vague. But “Our country” was certainly not Ukraine, to which Crimea has formally belonged since 1954 (from 1954 to 1991 in the framework of the Soviet Union). This is probably the greatest failure, not only of the current Ukrainian government, but also of all the administrations that have run independent Ukraine since 1991: they did not make Crimeans feel at home.

Similar sentiment, but on a much greater scale, can now be felt in the small unrecognised state of Transdniester, which separated itself from the now Europe-bound Moldova in 1992. Unlike the Crimeans, Transdniestrians promoted their desire to leave Moldova in 1992, when a short war against the Moldovans ended in a truce. In a referendum in 2006, 97pc voted in favour of joining Russia but the offer was declined by Moscow. “Now, not just regions in Ukraine, but even regions in Moldova– including the Turkic-speaking Gagauzia in the south – all feel reassured in their dreams of waking up in Russia some time," says Armen Oganessian, editor-in-chief of International Life.

If for the Transdniestrians and the Gagauzians this trend is a sign of hope, for some western politicians it is a reason for concern. The former national security adviser to President Jimmy Carter, Zbigniew Brzezinski, has even suggested “providing assistance to Ukrainians, in the sense of weaponry,” if there is a “significant local conflict” between Russia and Ukraine with “implications for the immediate neighbours to the west of Ukraine.”

The former US ambassador to Afghanistan and a long-time opponent of the Soviet presence in that region, Zalmay Khalilzad, suggested “arming those forces in Ukraine which are capable of resisting the Russian occupation of the east of that country”. It seems Mr Brzezinski and Mr Khalilzad, regarded as architects of the US policy in Afghanistan, do not exclude an “Afghan option” for eastern Europe, with Ukrainian urban guerrillas in the role of the Afghan Mujahideen.

There are reasons to hope Ukraine will avoid this kind of scenario. “The major drawback of this scenario is that it does not suit any of the parties involved,” says Alexei Pilko, head of the Eurasia Centre at RIA Novosti news agency. “It does not suit Moscow, because Russia differs a lot from the Soviet Union, which produced everything for itself. Modern Russia needs pipelines to get hard currency, which would allow it to buy in the EU things needed – for survival, not just fun.”  When guns begin speaking, pipelines tend to run dry, so Russia is the last country willing to hear the sound of gunshots in eastern Europe.

But this Afghan scenario is also unacceptable for the EU and Ukraine, where even the most belligerent politicians are not pleased by the perspective of becoming what Kseniya Lyapina, a deputy of the newly ruling Batkivshchyna faction, calls “the initial battlefield for some new global conflict”. Many people, not just in Kiev but also in Moscow, sighed with relief when the Russian Foreign Minister Sergei Lavrov said that Russia had no intentions of going beyond the eastern borders of Ukraine, and the Ukrainian foreign minister declared that Kiev’s new masters did not set itself the aim of making Ukraine a Nato member.

One senses that if politicians can stop inflaming passions, Russians and Ukrainians will be able to find common ground. The much talked about “ethnic conflict” between Russians and Ukrainians has few roots in reality; it exists mostly in the media or in the minds of intellectual fantasists and publicity seekers. To many, the fact that these individuals get preferential access to the mainstream media on both sides of the Ukrainian border seems more a reflection of media irresponsibility that the state of relations between the people.

Business as usual ruled out

“There will be no war in Ukraine, but there will be no return to the business as usual in Russian foreign policy,” says Alexei Vlasov, head of the research centre North-South at Moscow State University.

Boris Volokhonsky of the Russian Institute for Strategic Studies says: “The hopes of many analysts that the relatively mild sanctions will return Putin’s Russia to Yeltsin’s diplomacy are most likely misguided.” In Mr Volokhonsky’s view, much of Russia’s desire in the Nineties and early Noughties to have a new relationship with western Europe and the US was based on trust rather than on the “balance of fear”.

Boris Yeltsin expected western fears of Russia to evaporate as the Soviet bloc’s old bastions – East Germany, Poland, Hungary and the Czechoslovakia – changed hands. Initially, Vladimir Putin followed the same line, acquiescing to the expansion of the EU and Nato – even into the territory of the Baltic countries, formerly a part of the Soviet Union. But the second – much more violent than in 2004-05 – “regime change” in Ukraine set the alarm bells ringing. In Mr Putin’s eyes, the Kiev experience meant the West had not learnt from the failures of its previous “revolutionary” allies, such as the former presidents of Ukraine and Georgia Viktor Yushchenko and Mikhail Saakashvili. And the violence in Kiev meant, at least in Russian eyes, that the methods of a possible future “regime change” in Moscow might be even more cruel.

So, what will Moscow’s new line be? Of course, a 180-degree turn eastwards away from its estranged European relatives is not possible for Russia. But there is little likelihood of blind trust, when, in return for geopolitical concessions, Russia felt lectured on why this or that bitter pill was good for her. (The recent promises from Brussels that Russia could “profit too” from Ukraine’s drift towards the EU were not even taken for sugar coating, but dismissed outright.)

Economic rapprochement with the EU and, to a lesser extent, with the US will continue, as soon as the current rhetoric subsides and the tension in relations is relaxed. But security will probably be seen as an even more important criterion than profitability. As Mr Putin put in his speech on Crimea’s incorporation: “I simply cannot imagine that we would travel to Sevastopol to visit Nato sailors. Of course, most of them are wonderful guys, but it would be better to have them come and visit us and be our guests, rather than the other way round.”

And while this may sound wrong to an average western European, it certainly sounded right to the people I spoke to in Crimea and Moscow.

Dmitry Babich is a columnist for Voice of Russia radio.