Moscow demands an answer from NATO on troop reinforcements 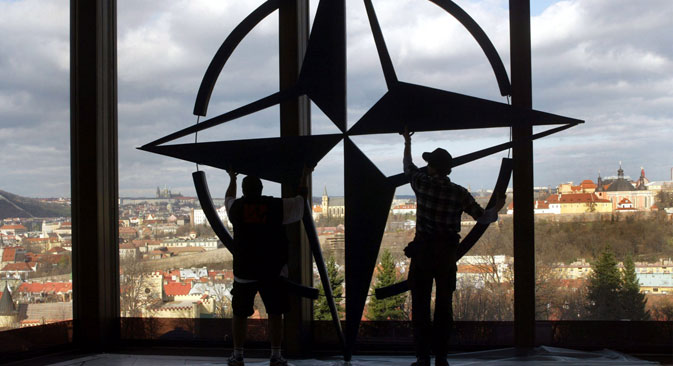 Russia has demanded that NATO explain its plans to bolster the numbers of alliance troops in Eastern Europe. Foreign Minister Sergei Lavrov says that the terms of Russia’s relations with the alliance preclude an expansion of forces in the region.

Russia has demanded that NATO explain its plans for increasing the numbers of alliance troops in Eastern Europe. According to statements made by Foreign Minister Sergei Lavrov on April 2, Russia believes its relations with NATO stipulate that there should be no additional permanent military presence in Eastern Europe.

"We are not only expecting answers from NATO, but answers that will be based fully on respect for the rules we agreed upon," said the minister.

A little earlier, at a meeting in Brussels on April 1, the foreign ministers of 28 NATO countries decided to "raise the level of defense of Eastern European allies in the context of the Russian-Ukrainian crisis." Allied Commander of NATO General Philip Breedlove confirmed that the alliance is already working on a plan to reinforce the defenses of these countries by April 15.

In response to NATO's growing eastern flank, Russia is forced to take security measures, said Russia's permanent representative to NATO Alexander Grushko at a meeting with Russian media representatives at his residence in Brussels in the evening of April 2.

Whatever NATO does to reinforce its eastern borders, "on our side, we will do everything necessary both politically and militarily to reliably ensure our safety," he said.

According to Grushko, NATO has basically completed its militarily assimilation of the territories neighboring Russia.

"In particular, airfields and the network of ports have been modernized. In 2009, the Baltic States and Poland were fully integrated into NATO defense plans, said Grushko.

“Last year the Steadfast Jazz exercise was held, during which steps were worked out for restoring territorial integrity in the event of external aggression. They were held under Article 5 of the Washington Treaty, which is a indisputably a scenario from the era of confrontation," said the Russian permanent representative.

"In addition, military bases were created in Bulgaria, Romania and Poland, missile defense sites are being built in Romania and Poland, and air patrols are now flying constantly in the Baltic States. At the same time NATO countries are trying to say that all these measures comply with their commitments in the NATO-Russia Founding Act to refrain from stationing further substantial combat forces on a permanent basis."

Grushko believes that the concerns expressed by the alliance countries in connection with the situation in Ukraine are absolutely unfounded. Moreover, military forces are being reinforced in the area adjacent to the Kaliningrad Region, where Russia has made a major contribution to guaranteeing security in recent years by substantially reducing armaments.

Russia has withdrawn hundreds of units of heavy weaponry from the region, including tanks, artillery systems, and armored personnel carriers, and reduced the number of military installations.

As for the alliance's eastward expansion, which may be decided at the next NATO summit in Wales in the beginning of September, this process has "proven that it weakens security, it doesn't erase the dividing lines, but shifts them east, applying psychological pressure to frontline states" Grushko said.

According to him, "In the 21st century, associating safety with the presence of foreign forces on your territory, and pressing for U.S. and other foreign bases to be established is not moving in the direction of a modern framework, which the world needs, but towards an era of confrontation, favoring security measures that should have been left in the past."

Grushko is convinced that NATO member states have differing opinions on returning to confrontation.

"The Baltic countries and Poland express extreme views, they are the ones talking the most about the lack of security and the need for additional measures to protect them. But there are other countries that understand that returning to an era of confrontation would be completely counterproductive and would divert resources from more pressing problems."

According to Norwegian Minister of Foreign Affairs Børge Brende, establishing NATO bases in the Baltic States could further escalate the Ukraine crisis. "The situation is very serious, but we should not escalate tensions further," he said.

Grushko regrets the fact that NATO has decided to suspend all civil and military contacts with Russia and dialogue with Moscow is now possible only at a diplomatic level. Furthermore, it was reported on April 2 that the alliance will halt cooperation with Russia even in Afghanistan, as soon as the current programs are wrapped up.

"All practical cooperation with Russia on Afghanistan will be halted until conditions change," said a senior representative of the alliance at a briefing for a small group of journalists at NATO headquarters, speaking on conditions of anonymity. Subjects being discussed include areas such as supplying transport helicopters and spare parts for the Afghan army and joint training with NATO of Afghan officers at four sites in Russia.

The official denied the statements voiced the day before by NATO Secretary General Anders Fogh Rasmussen that cooperation with Moscow on Afghanistan will continue.

Grushko said it was counterproductive for NATO to halt cooperation with Russia on Afghanistan.

"It will be primarily Afghans that will suffer from NATO's decision," he said. The situation in Afghanistan is deteriorating, and the challenges that faced NATO and International Security Assistance Force have not been resolved.

Therefore, according to Grushko, Moscow will assist the Afghan government in training forces to combat narcotics via bilateral channels. As for the so-called helicopter package, Mi-17 and Mi-35 helicopters make up the core of the Afghan air force, and without a military air component the Afghan army cannot guarantee stability in the country.

"Currently, the latest group of Afghan ground technicians is being trained at a center in Novosibirsk to service these helicopters. We are convinced that this project is necessary," said Grushko.