No Russian peacekeepers to Ukraine without UN resolution, says Moscow 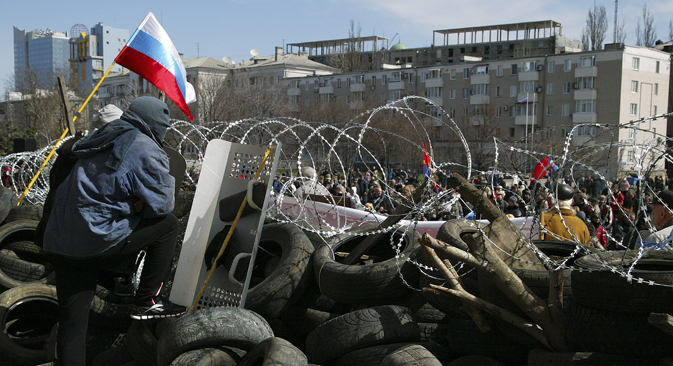 Russian peacekeepers cannot be brought into the Donetsk region of Ukraine without the consent of the UN Security Council, says a spokesman from Russia’s Federation Council. The Russian Foreign Ministry has also warned Kiev not to use force to suppress protesters.

Russian peacekeepers cannot be brought into the Donetsk region of Ukraine without the consent of the UN Security Council, said Viktor Ozerov, head of the committee on defense and security of the Federation Council (the upper chamber of the Russian Parliament). Meanwhile, the Russian Foreign Ministry has warned Kiev against using force to crack down on protests in the eastern regions of Ukraine.

Commenting on the possible response to a request by the self-proclaimed Donetsk National Council for the dispatch of a Russian peacekeeping contingent to the Donetsk region, Ozerov said that Russia was not entitled unilaterally to bring troops into the territory of another state unless there was a corresponding decision made by the UN Security Council.

In this case, said Ozerov, Russia, as a permanent member of the Security Council and a member of the Organization for Security and Cooperation in Europe, can join the peacekeeping force to ensure security.

He noted that "we have had examples of sending peacekeeping forces to the territory of South Ossetia and Abkhazia, but it was within the framework of the CIS."

Ozerov admitted that in March the Federation Council, at an extraordinary meeting called by Russian President Vladimir Putin, had agreed to the president’s request to use the armed forces of the Russian Federation in Ukraine if necessary.

"This was due to the situation in Crimea, but we acted on the basis of agreements on the Black Sea Fleet, and only strengthened the protection of our bases," said Ozerov.

Commenting on the situation in the eastern regions of Ukraine, where pro-Russian activists are in favor of a referendum on secession and unification with Russia, Ozerov said that “applying pressure to the situation from the outside would be counterproductive."

He stressed that Russia is interested in stabilizing the situation in Ukraine, however, public opinion must be recorded, and according to Ozerov, a referendum is the most democratic way.

Later, in an interview with RIA Novosti, the senator added that in the case of bloodshed and a possible outbreak of ethnic hostilities in eastern Ukraine, Moscow might reconsider its position.

"If genocide of the Russian people starts in the east of Ukraine, mass extermination on ethnic and political grounds, mass casualties, Russia is not just going to stand by and look at that," he underlined.

However, as the Kommersant daily newspaper reports, its sources in the Russian Defense Ministry have given assurance that no mention of a peacekeeping operation has been made in the military department.

In a statement posted on its website, the Russian Foreign Ministry has called on the authorities in Kiev to immediately cease any military preparations, fearing that such action may unleash a civil war in the country.

"According to the information available, there is a tightening of internal forces and the National Guard of Ukraine in the south-eastern regions of Ukraine, including in Donetsk, with the participation of the Right Sector illegal armed militant group,” the statement reads.

The ministry also alleged that 150 of what it described as “American experts from the Greystone private military organization” had been involved in the operation, claiming that they had disguised themselves as a Ukrainian special forces unit.

"The organizers and participants of this provocation assume responsibility for creating a huge threat to the rights, freedoms and the lives of innocent citizens of Ukraine and to the stability of the Ukrainian state" the ministry’s statement continued.

The transfer of special police to the east and south of Ukraine from other parts of the country was later confirmed by Ukrainian Interior Minister Arsen Avakov.

"These special forces are ready to solve operational problems without regard to local nuances," said Avakov, urging "all hotheads to defer their criticism and panic for now, and help the police keep the situation under control."

Earlier, in a conversation with the Acting Minister of Foreign Affairs Andriy Deshchytsa, Russian Foreign Minister Sergei Lavrov urged the Kiev authorities to refrain from the use of violent methods of resolving the conflict in the country.

Based on meterial published at Interfax, RIA Novosti, ITAR-TASS.