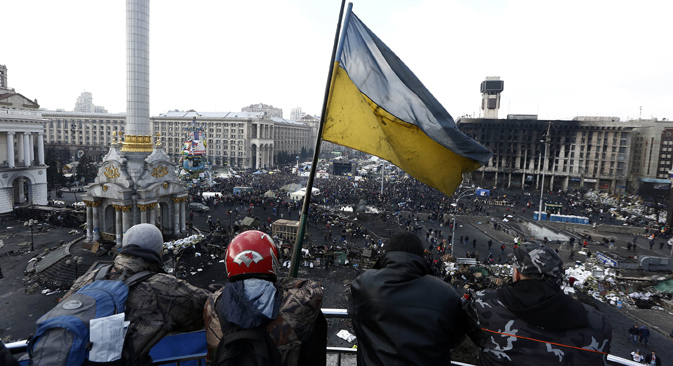 The Ukraine crisis is the strongest indication yet that the post-Cold War system of international relations needs a re-think.

Amidst escalating tension over Ukraine, the newest Russia Direct Monthly "A five-step program for fixing the Ukraine crisis" examines the root causes of this ongoing crisis, focusing on five key factors responsible for the current state of affairs. Only by addressing these root causes can both the West and Russia arrive at a possible solution to the standoff.

According to the report’s author, Maxim Kharkevich of Moscow State Institute of International Relations (MGIMO-University), the post-Cold War system of international relations appears to be going through a serious crisis and that requires a re-thinking of how things went wrong.

“The ongoing crisis in Ukraine and Crimea’s recent accession to Russia are events that clearly highlight the underlying sources of conflict in global politics,” Kharkevich wrote. “Even the exact term used to describe the situation in Crimea – ‘accession’ vs. ‘annexation’ - is a source of considerable diplomatic tension between Russia and the West.”

While Russia sees its actions in Crimea as a “reunification” and the respect for the right of self-determination, the West views it as a threat to European security and a violation of territorial integrity, Kharkevich highlights.

In many ways, the roots of the problem can be traced back to the legacy of the Cold War, which ended abruptly without fully establishing a new system to replace the bipolar system.

“One of the key contradictions in the post-Cold War system of international relations is the absence of a peace treaty to establish the new rules of the game for the great powers,” Kharkevich clarifies. “Since the war was ‘cold’ — and one of the superpowers suddenly ceased to exist, there was no peace treaty.”

At the same time, Kharkevich argues that it’s easy to see why many think that, “Russia views the disintegration of the former Soviet Union as far from complete and considers that the political map of the post-Soviet space has yet to take its final shape.”

The Cold War’s troublesome legacy created “a gray area” in global politics and hampered the development of standards of international law. According to Kharkevich, such a gap is fertile ground for the existing contradictions to escalate into conflict.

Regardless of growing tensions between Russia and the West, Kharkevich tries to see the problem from a positive angle. Any conflict reveals and highlights hidden sources of conflict, he argues.

“The stability of a system is determined not by a lack of conflicts (which are inevitable), but rather, by its ability to resolve underlying sources of conflict through compromise and constructive debate,” he concludes.

To read the entire report, subscribe to Russia Direct. To download Monthly memo "A five-step program for fixing the Ukraine crisis" as well as other Russia Direct reports for free, go to http://www.russia-direct.org/archive.