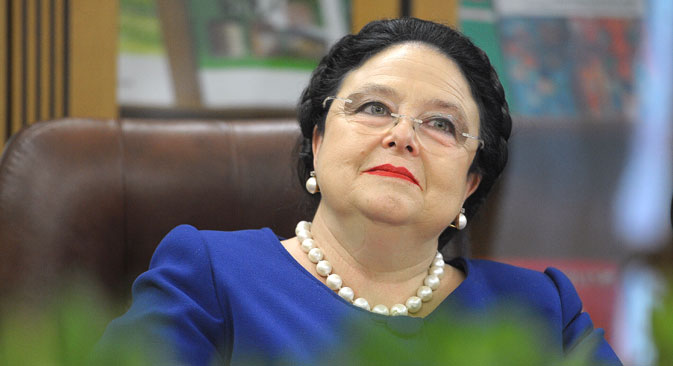 “Neither I nor my son are involved in politics.” Source: Grirory Syssoev/RIA Novosti

Izvestia: You promised recently to ask your august relatives to use all their authority to prevent an escalation of the conflict between Russia and the West. What can your relatives do in this regard?

Maria Romanova: In the modern world, heads and members of royal families, even of ruling ones, cannot exercise a significant influence on the policies of their respective countries. That is why it would be an illusion to expect some sensational and dramatic political steps on the part of European monarchs and heads of dynasties.

However, all royal houses, not only ruling ones, but also those deprived of power, retain a significant influence in the spiritual and socio-cultural sphere. Sensible figures can stop radicalism and hysteria, call for a balanced and rational approach, even if some of them do not agree or do not agree entirely with the things that have occurred. Such appeals voiced by members of royal dynasties will sound weightier because they talk in terms of historical process, rather than in terms of a particular immediate moment.

Izvestia: And what is the attitude of the august members of European houses to Russia today?

M.R.: Both before the revolution and now, the admiration for Russia’s cultural achievements and sympathy to the Russian national character cannot overcome the issues of competition and confrontation between countries. Each country has its own understanding of its place in the world and its own interests, and royal dynasties share the positions of their states.

Nevertheless, the monarchical worldview rejects all radicalism. The experience of two world wars of the 20th century shows that any explicit sentiment against any one people or country becomes destructive not only for those it is directed against, but also for those who tend to be impulsive and lose all sense of proportion. Until now, I have not heard members of any of the royal houses making any harsh anti-Russian statements.

Izvestia: What is your attitude towards the actions of the Russian authorities, concerning Crimea?

M.R.: When disturbing news started to come from Ukraine, the first thing I did was to call on its citizens to remember the terrible lesson of the revolution and the Civil War, to prevent fratricide and to make every effort to preserve the territorial integrity of the Ukrainian state. And if the situation in Ukraine were different, I would not have a firm belief that the return of Crimea to Russia was natural and inevitable. However, things began to develop under the worst-case scenario. There was a coup in Kiev, and the new government came under the control of extreme nationalists. The legitimate authorities in Crimea not only had the right, but also the obligation to take measures to protect Crimeans, who had elected them, from civil strife. Heads of state institutions in Crimea did not make decisions for their citizens, but held a referendum instead.

Izvestia: There is much talk in the world media now that Moscow is seeking to restore the Russian Empire...

M.R.: Neither the Russian Empire nor the Soviet Union can be restored in the form in which they existed. Integration is possible in new forms. The positive experience of the Russian Empire and the Soviet Union should be taken into account, and the mistakes that led to their collapse should be analysed as well. I firmly believe that there is still a common cultural space in the former Russian Empire. This is much more valuable than the state and political unity, which can be ephemeral and vulnerable. And civilisational unity, well-knit by centuries-old spiritual, cultural and social factors, is much deeper.

Izvestia: Can Western sanctions against Russia have positive results?

The 400th Anniversary of the Romanovs: Grand Duchess Maria Vladimirovna

M.R.: It is clear that Russia will not give up Crimea, which joined the federation, no matter what sanctions are imposed against the country. Just like the US and Europe will not retreat, for example, from their recognition of the independence of Kosovo. That is why the overcoming differences and coordination of positions should be reached by negotiations among equals, rather than threats and sanctions. One can and should seek reciprocal concessions on some issues, some additional counter-guarantees for reassuring the parties in negotiations.

M.R.: Neither I nor my son, Grand Duke George Mikhailovich, is involved in politics. This is a steadfast and principled position of the Russian Imperial House. We certainly have our opinions about current events, and we have every right to express them, as well as any citizen. However, we do not participate in any forms of political struggle. Our task is to serve the inter-faith, inter-ethnic and general civil peace, to preserve historical traditions, to try to help the needy to the best of our ability. I hope everyone understands this, and therefore understands that it would be wrong for me now to deliberately rush to visit Crimea.

As for the property, I have repeatedly publicly and officially expressed our unchanging position. The Russian Imperial House is fundamentally against all restitution and does not claim any property. We are pleased that things created by our ancestors are serving the people, and we do not ask anything for ourselves. The beautiful Livadia Palace, loved by Emperors Alexander III and Nikolai II so much, as well as all other houses and estates of members of our dynasty should remain in state ownership and be available to all compatriots as historical and cultural establishments and resorts.

The full interview was published in Russian by Izvestia.