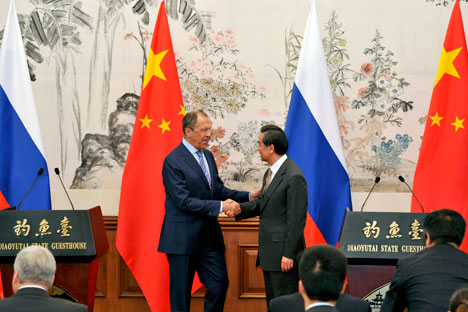 Russian Foreign Minister Sergei Lavrov recently met with his Chinese counterpart Wang Yi and Chinese President Xi Jinping. Although China does not support Russia’s position on the issue of territorial integrity, Moscow is content with what it sees as a balanced approach to the crisis from Beijing and is confident of securing a new gas deal in the near future.

Russian Foreign Minister Sergei Lavrov visited Beijing on April 15, where he met with his counterpart Wang Yi and Xi Jinping, the president of the People’s Republic of China. The Ukrainian crisis was one of the main topics of the talks.

Sources close to the delegation of the Russian Federation claim that China, which is maintaining a cool stance towards the issue, is rendering “the maximum possible support” to Moscow in the circumstances.

The official reason for Lavrov’s trip to Beijing was to make preparations for the visit of Russian President Vladimir Putin to China, which is planned for May. However, during the meetings, the representatives of the two powers did not confine themselves to the mere discussion of bilateral relations.

“There are many problems in the world. We are closely coordinating our approaches in relation to most of them, and in this sense, today’s meeting is especially timely,” Lavrov said yesterday.

We should recall that throughout the Ukrainian crisis, Chinese authorities have not made any statements that could be unambiguously interpreted either in favor of the Russian Federation or in favor of the West.

Beijing’s decision to abstain during the vote in the UN Security Council in relation to the annexation of Crimea, and then again at the General Assembly, can also be treated as ambiguous. Nevertheless, in his speech dedicated to the incorporation of the peninsula into the Russian Federation, Putin thanked the people and leadership of China for their support, while Sergei Lavrov said that China’s position was “objective and balanced”.

“China gives us as much as it can, and we cannot put pressure on it,” said a source close to the Russian delegation, explaining Moscow’s position. “If you come to a friend of yours and require something impossible from him, what will be the result? You will lose your friend.” Moscow is “completely satisfied” with the position of the PRC on the Ukrainian crisis,” said a source from Russian daily Kommersant. “Otherwise Vladimir Putin would not speak about this from the rostrum.”

Answering a question about China’s attitude towards the events in Ukraine, Chinese Foreign Minister Wang Yi said that his country does not need destabilization in Ukraine, according to Rossiyskaya Gazeta.

“It is important to take into account the legitimate interests of all the stakeholders,” he said, outlining the position of his country. However, he readily confirmed that “In relation to the Ukrainian issue, China and Russia maintain very close contacts and are constantly interacting.”

“China supports Russia’s position in relation to the Ukrainian crisis, except for the issue of territorial integrity,” Alexander Lukin, director of the Center for East Asia and SCO at the Moscow State University of Foreign Affairs, said in an interview. “China is happy that someone in the world has challenged the U.S. Moreover, China’s relationship with the U.S. has not suffered, and all the criticism has fallen on Russia.”

Lukin believes that the crisis in relations between Russia and the West may lead to the conclusion of a large-scale gas deal between Moscow and Beijing. “If because of sanctions, Russia has no one to sell gas to except for China, it is possible that it would have to make price concessions,” forecasts the expert.

More: What are the options for de-escalation in Ukraine?

However, sources close to the Russian delegation are urging people not to look for politics in negotiations on gas. “This issue is a purely economic one. Representatives of the Foreign Ministry are not even present during negotiations over price,”  said one source. “All the necessary political decisions were adopted back in the mid-1990s.”

The fact that Moscow and Beijing are close to signing an agreement, the terms of which have been discussed for about 10 years, was announced last week by Deputy Prime Minister Arkady Dvorkovich. Now the head of Gazprom, Alexei Miller, has promised that the agreement, involving the supply of 38 billion cubic meters of gas to China, will come into force by the end of 2014.