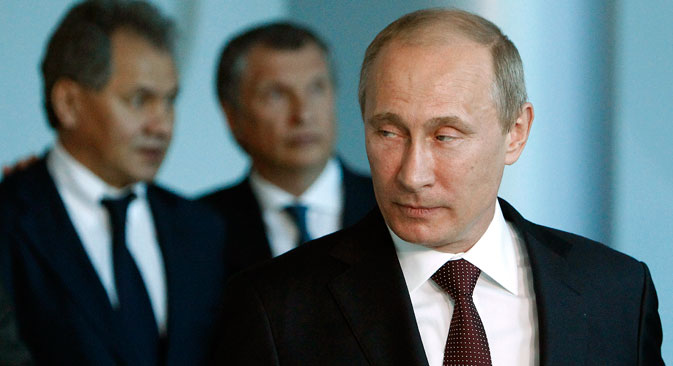 The U.S. has announced new sanctions against a range of Russian companies and individuals with close Kremlin links in response to what it sees as Russia’s continued intervention in eastern Ukraine. The Russian Foreign Ministry has warned that Moscow will make a “painful” response to Washington’s decision.

The U.S. has imposed new sanctions against Russian companies and individuals in response to what it sees as Russia’s “continued illegal intervention in Ukraine and provocative acts that undermine Ukraine's democracy.”

Putin: Wish of West to impose sanctions on Russian defense industries may be linked to attempts to prevent import substitution

The new list includes, among others, the president of the state oil company Rosneft Igor Sechin and the general director of the state corporation Rostekhnologii (Russian Technologies) Sergei Chemezov. The Russian Foreign Ministry has warned that Moscow would make a “painful” response to Washington’s decision.

The new list also included the deputy head of the Kremlin administration Vyacheslav Volodin, Deputy Prime Minister Dmitry Kozak and the Russian presidential envoy to Crimea Oleg Belaventsev. The sanctions also affect the chairman of the Duma Committee on Foreign Affairs Alexei Pushkov, as well as the head of the Federal Security Service Yevgeny Murov.

In addition, sanctions were placed against 17 Russian companies. All of these are controlled by either Putin allies Gennady Timchenko or Arkady and Boris Rotenberg, or Bank Rossiya. The list of companies also includes several banks, such as Investkapitalbank, Sobinbank and SMP Bank.

Russian Deputy Foreign Minister Sergei Ryabkov said the new U.S. sanctions against Russia would not go without a “painful” response.

“Of course, we will reply. We will never hide the fact that the possibility for such a response exists, and the set of measures that will be applied is rather wide,” Ryabkov was quoted as saying by Interfax. He noted that “this response will be painful for Washington.”

“No one has the right to speak the language of sanctions with Russia, and any attempts to dictate something to us, to set us ultimatums, will only turn against those who do this,” said Ryabkov.

Political scientist and chairman of the Council on Foreign and Defense Policy Fyodor Lukyanov, in his turn, said that the list of companies is important here.

“The chief sanctions are not against individuals, but against large companies, and this list will likely be expanded, cutting off these organizations from external financial markets. As to the personal sanctions against Sechin or Volodin – these are pure symbolism.”

“We are in the second phase of the ‘Cold War’,” he added. “It is difficult to say how long it will last, but certainly for the next few years. It will bloom and embrace all areas of relations.”

Close to the Kremlin, political analyst Gleb Pavlovsky said that “this is not a solution to the crisis, but a further aggravation of the situation.”

According to him, the goal of the current sanctions “is a combination of two motives: First to strike at the Russian economy, and second, to enrage Moscow, and thus reduce Russia’s ability to make an adequate response.”

Meanwhile, Yuri Rogulev, director of the Franklin D. Roosevelt Foundation for Studies of the U.S. at Moscow State University, said that the list promulgated by the United States was predictable.

“This is just a demonstration of their position. Indeed, for such a big country as Russia, such sanctions cannot have an instantaneous effect. However, I would not talk about a new Cold War or even very serious aggravation of relations; these are still just some additional cosmetic steps,” said the expert.

Based on material published by Interfax and Gazeta.ru