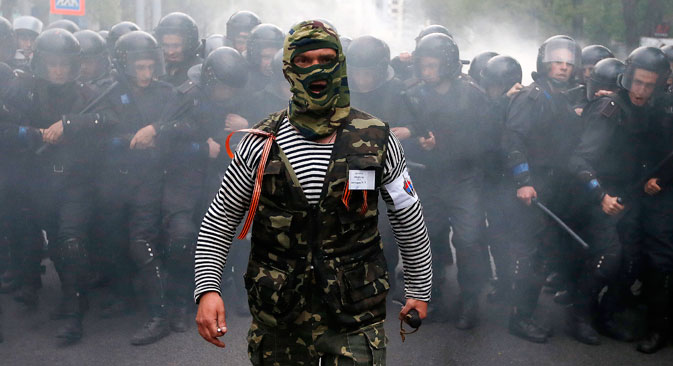 RBTH has made a digest of Russian press commentary on events in southeastern Ukraine.

The former owner of Yukos stated that <…> Vladimir Putin needs to open his eyes to the real situation in our neighbor to the west – there are no fascist-bandits in Ukraine.

The crowd did not meet the disgraced oligarch too loyally: “Get out of here! You plundered your country and now you have come here to steal from us,” yelled pensioners into Khodorkovsky’s face.

One of the pro-federalization self-defense fighters, a broad-shouldered hulk of a man with his sailor’s shirt bursting at the chest, said: “We don’t want you here. We didn’t invite you here. Go away.”

However, five minutes after the conversation with the most famous of political prisoners, the hulk invited him in. Khodorkovsky declined.

“I was pressed for time,” he later explained to an RBC correspondent. “I had to go to another meeting.”

If you found yourself in Slavyansk this weekend not knowing that regular units from the Ukrainian army and “supporters of federalization” were fighting for this city, you would never have guessed it.

Despite the “huge accumulation of enemy forces around the city,” mothers walk with baby strollers on the streets, an old lady feeds pigeons on the square in front of the state administration building, and city maintenance workers prune roses.

The white sandbags neatly lining the entrance to the city hall do not strike the eye. Barricades near the city police department building and on Karl Marx Street where the SBU (Security Service of Ukraine) is located are a bit more noticeable.

One of the BMDs [armored personnel carriers] that were captured from the Ukrainian army last week even stands in front of the SBU. However, the fighters on the barricades are in no way large in number.

Three more SBU employees were detained by the Slavyansk rebel army over the weekend, <…> said Denis Pushilin, co-chairman of the government of the republic.

Three more officers from Ukraine’s Security Service were added to the twelve Europeans – NATO military observers – who were detained earlier, charged with spying by the Slavyansk authorities. The officers are Lt. Col. Rostislav Kiyashko, Major Sergei Potemsky and Capt. Yevgeny Varinsky from the Ukrainian command of group A (“Alpha”).

The captives themselves said that they had participated in the military campaign in Iraq earlier. In the course of interrogations, it became clear that the lieutenant colonel, major, and captain had arrived in eastern Ukraine on the Kiev-Izyum plane.

From there the special forces operatives had been brought to Kramatorsk in a military helicopter. They were conveyed to the place of the assignment in cars. The group’s task was to kidnap one of the self-defense activists, Igor Bezler, who had already held the building of the Gorlovka department of internal affairs for ten days. Judging by the evidence found on the detainees, they left for the operation with unregistered weapons.

As long as the Ukrainian army continues manoeuvers around Slavyansk as part of an anti-terrorist operation, the self-proclaimed authorities of the city will continue to take as prisoners those who they suspect of engaging in intelligence activities and will seek to exchange them for their own comrades arrested earlier by the Ukrainian authorities.

On Saturday night, eyewitnesses reported exchanges of fire at checkpoints not far from Slavyansk – near the cities Artemovsk and Soledar. Representatives of the People’s Army of Donbass confirmed that Ukrainian soldiers destroyed a checkpoint and tried to take control of a weapons cache located there.

The Ukrainian Minister of Internal Affairs, Arsen Avakov, denied the information about the clash. “There is no fight,” reported the head of the local department of internal affairs. According to him, local activists had tried to take control of military storehouses.

But then again, the information from the Ukrainian military that they have completely blockaded Slavyansk has not been confirmed either. Over the weekend, it was possible to get into the city without any problem.

Read more: Worlds apart on a wish list for peace>>>