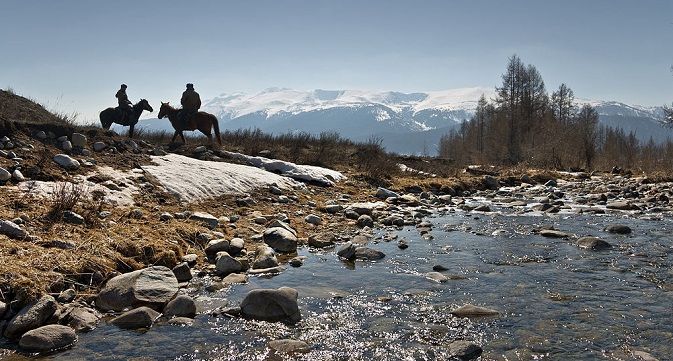 The resource-rich former Soviet republics are of vital interest to Russia and form the backbone of the Kremlin-initiated Eurasian Union.

The crisis in Ukraine that led to the secession of Crimea and its subsequent joining with the Russian Federation, as well as to the highly unpredictable destabilization in the eastern regions of Ukraine, has now brought up the question – Where could the next point of collision occur between ideas of Eurasian integration, inspired by Russia, and the alternative being promoted by the West?

How strong is Moscow’s influence in former Soviet republics to justify hopes for success in this geopolitical struggle?

Despite the fact that Russia is building the future Eurasian Union with this country, which is also a member of the Customs Union, it has only a limited influence on Kazakhstan.

Astana is apprehensive of the Kremlin’s overactive policy in creating the Eurasian Union (EAU) – President Nursultan Nazarbayev has repeatedly appealed to the Kremlin not to add excessive political colouring to integration projects, and insists on creating a primarily economic alliance.

“Let us build an economic union. Everything will come in its proper time. We are building an economic union, and hence the committee’s task is to exclude from this agreement any provisions which go beyond economic integration,” Nazarbayev said.

At the same time, Astana is one of Moscow’s easiest partners to negotiate with in the post-Soviet territories. As experience shows, there are no problems in relations between Russia and Kazakhstan that cannot be solved through active dialogue.

It can be regarded as the only Central Asian country with such a degree of constructive relations with the Russian Federation.

Russia’s influence on this country can be considered as rather strong. Since President Almazbek Atambayev came to power, Russia has strengthened its military and economic presence in this republic.

Moscow has signed an agreement with Bishkek for use of the military airfield in the town of Kant, where the 999th base of the Russian Federation Air Force will be deployed for 49 years, with an option to further extend this term for another 25 years

In exchange, Russia agreed to modernize the Kyrgyz Army and allocated $1.2 billion for the process.

In Bishkek, the Russian influence is viewed primarily in terms of receiving economic aid. This begins with the provision of loans, and finishing with cooperation within the framework of integration projects – the Customs Union and the Common Economic Space.

When it comes to economics, Moscow has been generous with this former Soviet republic. Last year, Russia forgave a Kyrgyz debt of $500 million ($88.9 million was written off instantly, and the second part of $300 million will be written off in equal parts during the next 10 years).

Russia also took over, in lieu of debt repayment, the Kyrgyz energy producer Kyrgyzgaz, having assumed the obligation of supplying the republic with natural gas and electricity. For this purpose, Moscow intends to build the Kambaratinskaya Hydroelectric Plant.

Russia’s growing influence in Kyrgyzstan falls in line with the plans of Bishkek to enter the Customs Union, and later the Eurasian Union.

However, relations between Moscow and Bishkek cannot be called cloudless, as Russia should always be ready to face internal disturbances in Kyrgyzstan, accompanied by changes of power and periodic fluctuations in foreign policy.

In this connection, we should note that visits of American officials and diplomats to Bishkek have become more active. This growth in visits coincided with the Ukrainian events.

For the Russian Federation, Tajikistan is considered a difficult Central Asian partner. Russian influence on this country can called moderate, though at first sight it seems rather strong.

In recent years, Dushanbe has been trying to balance its foreign policy between Moscow and Washington. For Moscow, the main leverage against Dushanbe is represented by over one million Tajik migrant workers living in Russia. Last year, these migrants sent home $3.5 billion, which is almost 50 percent of the country’s GDP.

After Moscow supported Emomalii Rahmon during the presidential elections last November, Dushanbe agreed to ratify the agreement signed by presidents of Russia and Tajikistan back in 2012, allowing the Russian 201st military base to be located in this country for 49 years.

Another important military facility of the Russian Federation is the Okno (Window) space monitoring station in Nurek.

Meanwhile the level of economic cooperation between the two countries is miserable, especially after the Russian Federation built and launched the Sangutdinskaya Hydroelectric Plant 1, and Tajikistan ceased paying for the energy generated by this plant, in lieu of the plant’s construction costs – in violation of the corresponding contract. By the end of 2013, this debt climbed to $90 million.

Russia’s influence on this country can be considered as minimal. Uzbekistan withdrew from such integration associations within the CIS as the EurAsEC and CSTO.

Tashkent is placing its stakes on bilateral relations with Moscow. President Islam Karimov has repeatedly said that relations between Uzbekistan and Russia are those of a strategic partnership and that they remain allies.

Unlike Kyrgyzstan and Tajikistan, there is neither Russian military nor noticeable economic presence in Uzbekistan. According to the statistical data, the ethnic Russian population in this country is also dwindling: according to experts, while in 1989 there were 1.8 million people who were ethnic Russians, today there are some 500,000 eastern Slavs left there.

Accordingly, the usage of the Russian language is also diminishing. However, it would be wrong to say that Tashkent is turning its back on Moscow. It has only distanced itself to some extent – but not for the sake of becoming closer to someone else.

After the breakup of the USSR, Ashgabat pursued a policy of isolationism. All cooperation between Russia and Turkmenistan was largely confined to the field of natural gas trade: Gazprom purchased about 65 billion cubic meters of gas per year from this Asian country.

More: Russia does not want another Soviet Union

However, when in 2009 the situation in the European natural gas market changed, the volume of purchases dropped to 10 billion cubic meters per year.

Turkmenistan is still only an associate member of the CIS and seldom attends events held under the auspices of the Commonwealth, although rather recently Ashgabat hosted a summit of presidents of CIS member states.

Turkmenistan shows no interest in multilateral alliances, and despite certain liberalization and reforms in recent years, it remains the most closed country in post-Soviet space.

Moscow’s influence on Ashgabat may be characterized as nominal – and the same can be said of the influence of other geopolitical centres of the world.