Dialogue on Ukraine must include representatives from East, says Lavrov 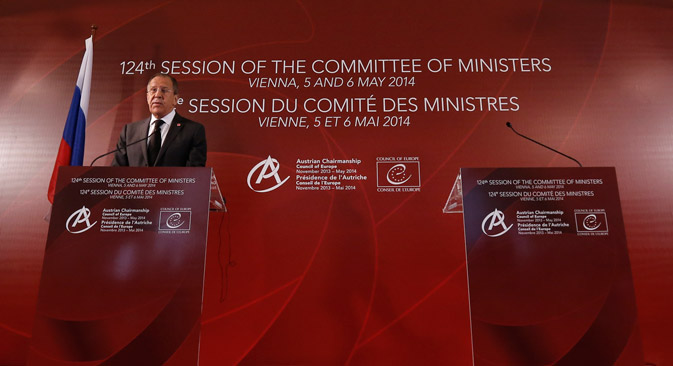 Sergei Lavrov: “Let us not break up Ukraine between East and West, and join our efforts to help start a dialogue”. Source: Reuters

Events in Ukraine became the central focus of the 124th session of the Committee of Ministers of the Council of Europe in Vienna on May 6, with Russian Foreign Minister Sergei Lavrov questioning the appropriateness of holding elections in the current climate and calling for equal representation for eastern Ukraine in any new dialogue.

However, this time things were different. After the recent events in Slavyansk, Odessa and other cities in the south and east of Ukraine, it became apparent that the key issue at the meeting would be the Ukrainian crisis. Therefore, special attention was paid in Austria to Russian Foreign Minister Sergei Lavrov, who participated in the meeting.

The Russian minister brought with him to Vienna a “White Book”, prepared by the Foreign Ministry and first presented to Russian President Vladimir Putin. This was a report summarizing human rights violations in Ukraine in the period from November 2013 to the end of March 2014.

The main task of the Austrians was to prevent a split between members of the Council of Europe over the Ukrainian conflict. The likelihood of that happening was very high.

Representatives of the new Kiev authorities, headed by Acting Foreign Minister Andriy Deshchytsia,wanted to put before the Committee of Ministers a draft statement calling for harsh criticism of Russia’s position, an undisclosed source told RBTH. Moreover, the chances of the adoption of this document were quite high. Indeed, the Council of Europe permits the adoption of documents via a vote, if a simple majority endorses this.

Apparently, most European countries did not wish to bring this matter to a confrontation. The Ukrainian side was not able to present their document for consideration by the Committee of Ministers. In turn, the speech given by Lavrov at the meeting was not as sharp as was originally anticipated, judging by the circulation among journalists of a rough draft of the Russian minister’s speech.

The main focus of the speech was the tragic events in Odessa on May 2. According to the Ministry of Internal Affairs of Ukraine and the Prosecutor’s Office, 46 people were killed and 214 were injured in the clashes.

The initial draft of the speech states that those who organized the riots in Odessa, “those who mocked the corpses” and shot at people who tried to escape from a burning building, “made no secret that they were celebrating their victory over the Russians.”

It goes on to say that the world had “witnessed overt manifestations of fascism. Not one of the perpetrators of this heinous crime, committed by radical nationalists, has yet been arrested.

“In the West, although they condemn the Odessa tragedy, they are trying to turn a blind eye to its true cause. This is just like in the recent past, when they remained silent, and even justified the position of then-President Viktor Yushchenko and his associates when these undertook the legalization of the ‘heritage’ of [WWII Ukrainian nationalist leader Stepan] Bandera and [WWII Ukrainian Insurgent Army general Roman] Shukhevych, and their atrocities and crimes under the sauce of a ‘new Ukrainian patriotism’,” read Lavrov’s draft speech.

At the final press conference, Lavrov did not categorically reject the idea presented by the German Foreign Minister Frank-Walter Steinmeier about a new quadripartite meeting on Ukraine in Geneva. However, he warned that in the old format of the Russia-Ukraine-EU-U.S., such talks would not be effective without the participation of representatives from southern and eastern Ukraine.

“We can certainly meet again in the same format at the negotiating table, without members of the opposition to the current regime being present, but this will hardly add anything new: We will be going around in circles, and saying once again that it is necessary to carry out everything that we agreed upon,” said Lavrov.

Opinion: What must be done to reduce tensions in Ukraine

“Yet these things must be carried out by the Ukrainians themselves – the current regime and those who are opposed to it.”

Although the foreign minister believes it “strange” to be holding presidential elections in Ukraine “in an environment where the army is being used against the population,” he did not directly question their legitimacy.

“Elections must be free, fair, and held in an environment that excludes violence, and under objective, impartial international monitoring,” he explained.

At that, Lavrov pointed out that there would not be enough time to complete the process of constitutional reform in Ukraine by May 25. This means that “in voting for a particular candidate for the presidency, voters will not know what scope of authority that person would have if he is elected, because the constitution – and they speak about this openly – will redistribute powers between the president and parliament.”

Much more logical and just, according to the minister, was the course of action outlined in the agreement signed on February 21: a new constitution in the fall, and elections before the end of the year.

Speaking about the participation of Ukrainian troops in the “anti-terrorist operation” against pro-autonomy militias in the east of Ukraine, Lavrov said that the authorities in Kiev should stop using the army to suppress civil protests, recalling that when Viktor Yanukovych had been in power, the West had expressed its opposition to the use of the military in civil confrontations.

“Now we are hearing, including from the leadership of the EU, the thesis that the Ukrainian leadership has every right to use the army to carry out aso-called ‘anti-terrorist operation’, and that all this is justified because the state has a monopoly on the use of force,” said a perplexed Lavrov.

“Let us not break up Ukraine between East and West, and join our efforts to help start a dialogue,” Lavrov urged his colleagues.

According to him, practical steps can be undertaken only by the Ukrainians themselves, if there is no interference from the West, which, according to Moscow, has not yet matured enough to agree to the equal participation of southeast Ukraine in a national dialogue.