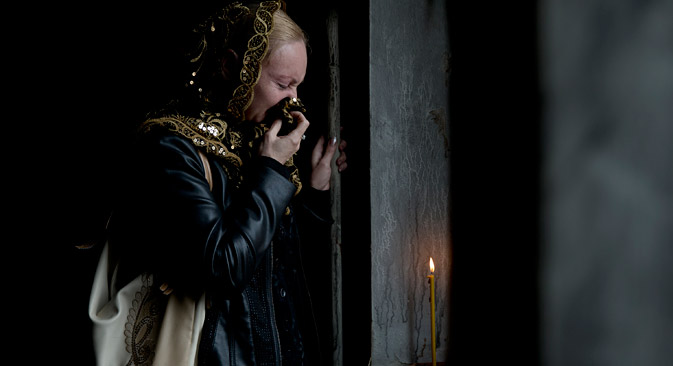 The shocking events of May 2 in the Ukrainian port, in which at least 46 people were killed, continue to be the most discussed topic not only in the Ukrainian, but also the Russian mass media. The background to the incident is now becoming clearer as video footage and eyewitness accounts surface, but many questions remain unanswered.

On the morning of May 7, the Russian Minister of Foreign Affairs Sergei Lavrov harshly condemned nationalist radicals for their complicity in the tragedy which occurred in the southern Ukrainian port of Odessa on May 2, in which at least 46 people were killed in a fire in the city’s Trade Union Building.

Although the events in the city continue to be the most discussed topic not only in the Ukrainian, but also the Russian mass media, the background of the incident remains murky, though new details are surfacing in the press every day.

The first reports from the location of the fire attested to the fact that the majority of the victims were poisoned by carbon monoxide. However, then information began to appear about the use of firearms and violence in relation to the dead, and the death toll continued to rise.

The sequence of the events of May 2 in Odessa can be reconstructed approximately by collating the many videos shot of the proceedings, the testimonies of eyewitnesses, and reports in the media.

In the afternoon of May 2, on Cathedral Square in Odessa, fans of the soccer clubs Chernomorets Odessa and Metallist Kharkov decided to march to the Chernomorets stadium, where the teams were to play a match. The majority of the fans held Ukrainian flags in their hands. Some of the local people interpreted the column of fans as a demonstration of support for a united Ukraine and joined the procession.

According to a different version of events, a march “For a United Ukraine” had been organized earlier and the Odessa and Kharkov soccer fans merely joined the pro-unity demonstration.

As soon as the column began its procession, it was attacked by a group proclaiming their support of a federalized Ukraine, who were wearing masks and carried bats and air pistols. Some witnesses say that both sides had firearms. Numerical superiority was on the side of the pro-unity supporters, who numbered several thousand, against the 300-400 federalist demonstrators. The latter had to retreat to a shopping mall and take cover. The police tried to keep the two sides separated by forming a cordon of officers, but were unsuccessful.

Certain people with red armbands who, by all appearances, were provocateurs, played a special role in these events. Such bands were worn by both pro-unity and federalist demonstrators, as well as a number of policemen. It was specifically these people in red armbands, according to eyewitness reports, who opened fire and later threw explosive packages (firecrackers) from the roof of the Trade Union Building.

As a result, the pro-unity activists broke through onto the Kulikovo Pole square, where the federalist camp was situated, and burned the camp.

Fire in the Trade Union Building

The videos recorded by participants in the events attest to the fact that the fire in the Trade Union Building began literally just a couple of minutes after the federalist camp was torched. In one video one can see how the fire appears simultaneously by the entrance to the building and in a fifth-floor window.

The cause of the fire remains unclear as of yet. Investigators think that an explosive package or flare ignited plastic panelling on the premises but it is still unclear which side it was thrown by.

The fire brigade arrived at the scene of the incident only 40 minutes after the fire broke out, The pro-unity activists maintained a siege of the building, in which there was no water or fire extinguishers, throughout this time and even, according to the reports of witnesses on internet forums, slashed the fire hoses, which made putting the fire out much more difficult. Some of the supporters of a united Ukraine shot at the windows of the burning building.

The pro-unity activists helped their enemies get out of the blaze (those that could prove they were Odessans), but then beat them up. According to some information, several people were hospitalized or even died as a result of the beatings.

Additionally, on May 6 a video surfaced on the net showing the supporters of a united Ukraine breaking into the Trade Union Building with sticks and chains.

The dead and wounded

Official sources, the mass media, and bloggers cite various casualty figures. The Odessa Regional Prosecutor’s Office announced there were 46 killed as a result of the fire. Bloggers, meanwhile,have written of around 217 being killed, and the Odessa news site Timer cited information from law enforcement officers and forensic experts on 116 casualties.

Again, according to official data, all of the people died from suffocation by carbon monoxide. Timer, however, cites forensic experts who talk of six casualties who were killed by wounds caused by firearms.

Investigators found charred bodies on the second and third floors of the building, while the epicenter of the fire was concentrated on the first floor, and in several rooms where the dead were found, there were no signs of burning.

Wounds caused by firearms are clearly visible on the bodies of some of those killed – videos and photos of them have been published by bloggers – and others were soiled with powdered fire extinguishing material, which according to the accounts of participants in the events had not been present in the building.

One can see in the photographs published by bloggers, taken at the site of the incident, that half of the charred bodies were found in areas where there were no signs of burning.

People’s Deputy of Ukraine Volodymyr Ariev has also put forward the version that people in the Trade Union House were not poisoned by carbon monoxide, but by some other toxic gas similar to chlorine that was supposedly released into the building. Acting Deputy Prime Minister of Ukraine Viktor Yerema reaffirms this version.

“I was at the site of the incident and saw a large number of dead people,” said Yerema at a press conference on 3 May. “They were killed suddenly, very fast. That is, some kind of material burned that emitted a gas, and that gas acted very rapidly on the people, who lost consciousness and died where they were.

“What kind of gas this was, what kind of material burned, experts will determine,” said Yerema.

The investigation into the case continues.