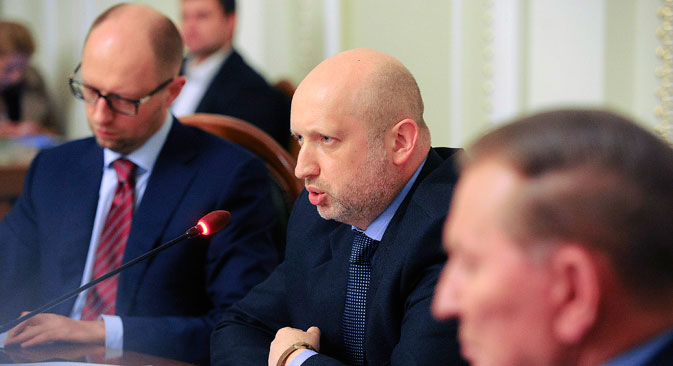 The new Kiev authorities focus on a dialogue with the regions. Source: Reuters

Roundtable unity talks begin in Kiev but many representatives from Ukraine’s southeast refuse to attend; Ukraine seeks to raise cash by selling Eurobonds with U.S. guarantees; Gazprom’s chairman is rumored to be next on the sanctions blacklist; Crimea attempts to solve its water supply problem.

The Kommersant newspaper analyzes the current economic situation in the country and tells its readers that Kiev is planning to sell $1 billion worth of Eurobonds, payouts for which will be guaranteed by the U.S. Agency for International Development.

The newspaper notes that before the change of power in Ukraine, the issuing of Eurobonds was assisted by the Russian side, which bought $3 billion worth of two-year Eurobonds in late December under a loan agreement totaling $15 billion.

Now, however, the newspaper reports that in practice, “Kiev cannot independently cover the budget deficit through foreign borrowing: rating agencies assess Ukraine’s creditworthiness as a limited,” and international organizations predict it will fall by 5-7 percent this year.

In another article, the Kommersant newspaper writes about the last meeting of the first all-Ukrainian roundtable of national unity in Kiev, which was attended by about 40 politicians. The majority of them, as the newspaper notes, were from Kiev and the western regions, but there were not enough representatives from the southeast of the country.

Russia calls for inquiry into vandalized grave of Odessa victim

The meeting was opened by Ukraine’s acting president Oleksandr Turchynov, who stated that "it is not important for the new Kiev authorities what region the citizens live in, what language they speak and what church they go to.”

He also stressed that Kiev is ready to hold a dialogue with the regions. However, Oleksandr Yefremov, the deputy chairman of the Lugansk Party of Regions faction, recalled in turn that many in the east consider the current Kiev authorities illegitimate.

He stressed the need for constitutional reform, explaining that "the east of Ukraine can arrange decentralization or federalization without the right to secede from the country."

Nezavisimaya Gazeta also published an article about the first meeting of the all-Ukrainian roundtable of national unity, which was initiated by the OSCE to address the situation in the southeast of the country.

The publication notes that the leaders of the breakaway “republics” of Donetsk and Lugansk and militia leaders were invited to participate in the negotiations, however, they refused. “They focus on Moscow’s word, without which the Ukrainian crisis will probably be impossible to solve,” says the publication.

The newspaper cites the opinions of experts who note the growing fatigue among European politicians concerning the events in Ukraine and their desire to resolve the conflict quickly. At the same time, the publication’s interlocutors note that “there are examples of Western mediators negotiating for 30 years, and all the while, blood is being spilt.”

In its "From the Editor" section, Nezavisimaya Gazeta published an article titled “There are no negotiators, not even blind or deaf ones”, which argues that one of the major problems impeding the resolution of the conflict in Ukraine is the lack of new political leaders. Ideally, as the newspaper writes, the situation requires a “person who has a lofty reputation throughout the entire country and is capable of uniting it. However, there is no national hero. The political stage of Ukraine is populated by frustrated politicians, figures with a far from unblemished reputation, or simply characters from an operetta."

More: Russia to suspend the operation of GPS stations on its territory

However, according to the publication, the company’s European partners have managed to convince the authorities to exclude Miller from their list, "citing the fact that the sanctions seriously complicate their work" with Gazprom. Representatives of major European oil companies have refused to comment on the situation.

Gazeta.ru, meanwhile, published an article about one of Crimea’s most pressing problems – that of water supply. According to the newspaper, Simferopol and Kiev are engaged in talks over the resumption of water supply to the peninsula. The publication notes that alternative water sources to the peninsula’s North Crimean Canal are unlikely to appear in the near future.