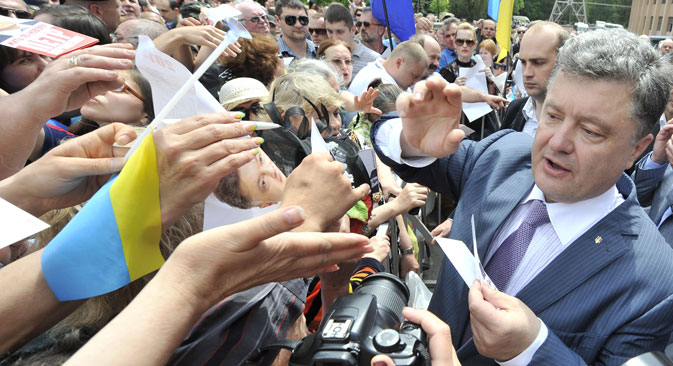 On May 25, Ukraine goes to the polls to vote for a new president. Citizens casting their vote at polling stations will see the names of 23 candidates* on the ballot. This is an unprecedented number – and the Ukrainian people will be facing a difficult choice.

There is little to choose between the election programs of many candidates, which feature broadly similar statements and promises. Almost all the candidates are focusing attention on strengthening the role of the regions, the introduction of anti-corruption measures and the strengthening of democratic rights in the country.

RBTH presents a “who’s who” list of the candidates and profiles their background and political alignment.

* On the eve of the elections, six of the candidates (Alexander Klimenko, Petro Symonenko, Vasily Tsushko, Oleg Tsarev‏, Natalya Korolevskaya‏ and Zorian Shkiryak) announced they were withdrawing their names from the balloting, however, because their statements were received too late, their names remain on the printed ballots.

Under Yanukovych, he was Minister of Economic Development and Trade and the Minister of Foreign Affairs. Actively supported former president Yushchenko during elections in 2004, but eventually lost his post and faded into the background. In these elections, Poroshenko is supported by Vitali Klitschko and his UDAR Party, the All-Ukraine Association of Veterans of Afghanistan and Yuriy Lutsenko – the leader of a civic movement called Third Ukrainian Republic. According to the Ukrainian magazine Korrespondent, Poroshenko’s assets are valued at $505 million.

Leader of the Fatherland Bloc, Prime Minister of Ukraine in 2005 and 2007–2010. In 2011, she was sentenced to seven years in prison on highly questionable charges of abuse of power and official authority during the conclusion of gas contracts with Russia in January 2009. On February 22, 2014, the Verkhovna Rada freed Tymoshenko from prison. Tymoshenko stands for Ukraine’s integration into Europe. In these elections, Tymoshenko supports Ukraine’s Prime Minister Arseniy Yatsenyuk. On March 18, a video was posted on YouTube of a telephone conversation recording in which a woman purported to be Tymoshenko said the phrase “eight million Russians in Ukraine – nuke them!”

Tymoshenko has admitted that the conversation took place but denies uttering those words, claiming that they were edited into the recording by the Russian security services. Source: YouTube.

Deputy Chairman of the Party of Regions, advocates for closer economic cooperation with Russia. Was the Vice Prime Minister of Ukraine (2010-2012) in the first government of Mykola Azarov. In the 1990s Tihipko was the chairman at PrivatBank, and was also involved in the banking and pharmaceutical business. According to recent estimates Forbes (March 2014), Tigipko's net worth is about $1 billion. Tigipko simultaneously advocates for Ukraine's accession to the EU and for the fact that Ukraine together with Russia and European countries has created a new system of international security.

Nationalist, one of the main figures of the Maidan protests. Leader of the controversial right-wing political party Right Sector and Tryzub (Trident - Stepan Bandera’s All-Ukraine Association). According to Yarosh, his allies are “the allies of literally all presidential candidates, the political forces that they represent, and who stand for Ukrainian nationhood.” On March 5, 2014, Russia’s Investigative Committee placed Yarosh on an international search list for public incitements to terrorist and extremist acts.

A renowned physician and the owner of an upmarket clinic in Kiev. Participated actively in providing medical support to Maidan in Kiev during the political crisis in Ukraine in 2013-2014. During the pre-election debates, Bogomolets requested that European troops enter Ukraine (video from the debates).

Former chairman of the board of the country’s main oil and gas company Naftogaz in 2002-2005. Expelled from the Party of Regions in April 2014 when Yulia Tymoshenko suspected that Boyko was lobbying for the interests of Russian oil companies. In October 2006, Tymoshenko, live on TV Channel 1+1, showed documents that allegedly proved the involvement of Boyko in the creation of the company RosUkrEnergo AG – an intermediary which sells Russian gas in Ukraine.

Independent entrepreneur from Kharkiv who has never before sought senior government positions. He stands for an independent Ukrainian position in relation to geopolitics. Quote: “The fact that Putin’s regime invaded Crimea – this is far from a fraternal act. However, on the other hand, where are our European and American partners who signed the Budapest Memorandum?”

Defense Minister of Ukraine under President Yushchenko (2005–2007). Leader of the Civil Position Party. Earlier, he was a member of Yulia Tymoshenko’s Fatherland Party, which turned against him for criticizing the Maidan protests.

Nominated by the Party of Regions. Dobkin was part of the group of active opponents of the Our Ukraine Party and the Yulia Tymoshenko Bloc. During the debate, he clearly followed the rhetoric of “regionals” – The “orange” factions are forcibly drawing Ukraine into NATO, violating the rights of Russian-speaking population, trampling on national interests in relation to gas supplies, etc.

Former member of the Party of Regions. Was a businessman in Donetsk in the 1990s and a deputy governor of the region for a short time. Supported candidate Viktor Yanukovych during the 2004 elections. Quote: "I will do everything to make both the West and Russia remain equidistant from Ukraine."

Former mayor of Lviv and the Minister of Regional Development in the government of Yulia Tymoshenko (2007-2010). Was prosecuted in 2010 (as well as many other ministers in the Tymoshenko government) followed by the initiation of criminal proceedings, which were closed at the end of that year. Quote: "We need to do everything to defeat the Russian information machine."

Leader of the Radical Party. Master of loud statements and extravagant behavior. Maidan supporter, handed out pitchforks to protesters on the Maidan. Quote: “If I become president, Putin will have a heart attack.”

Lyashko with his pitchforks on the Maidan. Source: YouTube

Well-known expert in the field of security and intelligence, General. Headed the Foreign Intelligence Service of Ukraine (2005-2010) under President Viktor Yushchenko. According to Malomuzh, the unrest in eastern Ukraine was initiated exclusively by representatives of the Russian special services, criminal elements, representatives of pro-Russian organizations and representatives of murky business.

Ukrainian-Israeli businessman. In the 1980s, he was arrested several times for embezzling public funds. In the 1990s, he participated in the oil business of the company Nordeks, and in the early 2000s, he created a major media holding – Media International Group. His election statements have a pro-Western character.

Kiev businessman engaged in the production of curtains, curtain rods and accessories. Non-partisan. According to his election program, Saranov wants to investigate the massacres that occurred during the Maidan protests, and return to the state all assets attained by criminal means. Quote: “However our relations with Russia may develop, sooner or later all wars come to an end.”

Politician with nationalist views. Represents the all-Ukraine union Svoboda (Freedom). Stands for Ukraine’s integration into Europe. Quote: “As recent events have shown, Russia has never been and never will be our strategic partner.”