Press Digest: What the papers say on Ukrainian elections 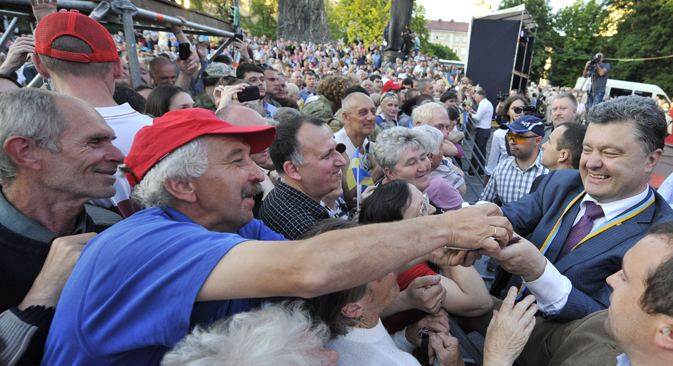 RBTH brings together a selection of views from leading Russian media on Petro Poroshenko’s victory in the presidential vote in Ukraine, with comment on the fate of Yulia Tymoshenko, election turnout, the problems experienced by voters in the Donetsk and Luhansk regions, and the next step for the new president.

The Kommersant daily tells its readers how the Ukrainian presidential election went in Kiev. The paper notes that all throughout the day, the turnout was high, with queues of hundreds of people forming at many polling stations.

According to Kommersant, many voters are convinced that if Yulia Tymoshenko and her party later win in the parliamentary election, it would mean that "they have given their vote for Petro Poroshenko in vain" since she is sure to start manipulating the newly elected president. Kommersant points out that Tymoshenko is mainly scoring with those who voted for her in the past: They are her loyal core electorate.

As for Petro Poroshenko, Kommersant continues, citing sociologists, ideologically "his is a mixed audience, made up of people who are united by their strong disappointment with the political elite that has formed over the past 10 years.”

Throughout the day, the paper adds, Kiev's attention was focused on the Donbass region in the east of the country. Kommersant quotes the head of the Ukrainian Central Electoral Commission, Mykola Okhendovsky, as saying that "under no circumstances will there be any doubt in the legitimacy of the election.”

Another Kommersant article points out that this is the result that Ukraine more or less expected to get. "Not everybody believed in Mr. Poroshenko's victory in the first round," the paper adds. It quotes many voters as saying that "there is no one else to choose from.” "A tired nation made a desperate leap to the ballot box and believed yet another man's promises to help each and every one of them," Kommersant says.

After the first results started coming in, Kommersant continues, Petro Poroshenko repeated all his campaign slogans, this time already as his presidential slogans: "…a unitary rather than a federative state; and orientation towards European values".

Speaking at a news conference, Poroshenko said he believed that "the whole of Ukraine” had voted. “To do that many Ukrainians left Crimea, while residents of the Donetsk and Luhansk regions managed to find polling stations to vote at locally.” Poroshenko also declared that "Ukraine will never recognize the illegitimate referendum and will never recognize the occupation of Crimea.”

Nezavisimaya Gazeta also looks at the results of the Ukrainian election. According to the paper, voting was disrupted in 10 out of 12 constituencies in the Luhansk Region and in 15 out of 22 in the Donetsk Region. Elsewhere in the country the turnout was very high.

"This election was unique in that all the candidates were equally interested in fair voting and transparent vote-counting. Besides, none of the contenders had the administrative resources that were traditionally used in previous Ukrainian elections," the paper says.

NG stresses that the only violations that were recorded at polling stations on the voting day were "inaccuracies in electoral rolls and obstacles to observers' work," while there were no reports of voter bribes or ballot stuffing.

"This election is the result of a people's revolt against an authoritarian rule. People want to see through to the end what they have started: Not just to change those in power but to replace the whole system of power," the paper says.

At the same time, it points out that the powers of the new president are seriously limited by the 2004 constitution and are likely to be limited even further after a new constitution is adopted.

"Therefore, it does really matter that much who will win. Yet the very fact of the election and the recognition of its results allow Ukraine's partners to speak about the country's future, inviting to the negotiating table the new Ukrainian president too," the paper concludes.

For its part, Gazeta.ru quotes Petro Poroshenko thanking the Ukrainian people "for a record-breaking turnout: The number of people who came to polling stations was enormous, both inside and outside Ukraine.”

Poroshenko not only promised to restore "peace to the Ukrainian land" but also announced that his first working visit will be to the rebellious Donbass region, where he intends to declare an amnesty. He also said that "relations with Russia are going through the most difficult period in the last 200 years.”

Elections in Ukraine: The view from social media

Poroshenko, Gazeta.ru continues, hopes for an early meeting with Putin, who, the paper recalls, said the other day that he was ready to work with the new Ukrainian president, adding however that "the first issue that needs to be resolved is the repayment of gas debts.”

Summing up, Gazeta.ru concludes that "Ukrainian politics is a battle of the nerves.” Poroshenko had waited for a long time before moving to the foreground, "but it is yet to be seen whether, given the continued fighting in the southeast and a dire economic situation, he has chosen the best moment for entering the political arena,” it says.