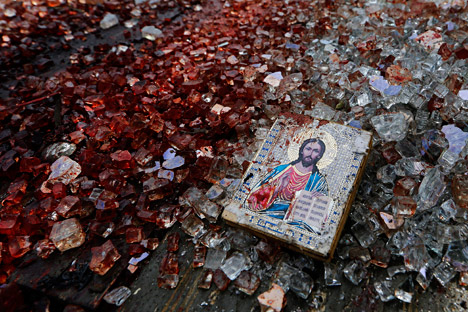 The situation in Donetsk began to escalate just a few hours after the polls closed in Ukraine. Source: Reuters

RBTH brings together a selection of views from leading Russian media on Petro Poroshenko’s first statements following his win in the Ukrainian presidential elections, the shootout between pro-autonomy militiamen and the Ukrainian army at the airport in Donetsk, and the trilateral meeting in Berlin over Ukraine’s gas repayments to Gazprom.

A special correspondent for the newspaper Kommersant talks about yesterday’s shootout at the airport in Donetsk, which he witnessed. The publication states that the day after winning the presidential election in Ukraine, Petro Poroshenko has declared the “need to continue the military operation in the country’s eastern regions.” Kommersant quotes an official statement in which the politician emphasizes his support for the anti-terrorist operation, but demands a change in the operation’s format: “It should take less time, be more efficient, and units should be better equipped with the best weapons and ammunition.” According to the newspaper, on Monday afternoon Ukrainian aircraft attacked Donetsk International Airport, which was previously occupied by militia forces from the Donetsk People’s Republic. Exact statistics regarding the number of people killed and wounded as a result of the confrontation have not been reported by either side, Kommersant writes.

Press Digest: What the papers say on Ukrainian elections

Gazeta.ru reports that the situation in Donetsk began to escalate just a few hours after the polls closed in Ukraine. The publication writes that the Ukrainian authorities have declared that they will enact an “anti-terrorist operation” in the near future. In response, the self-proclaimed Donetsk People’s Republic declared martial law in the region. Gazeta.ru suggests that recent events in Donetsk “are developing in the context of such military statements,” as confrontations continued for the entire day on Monday at the international airport in Donetsk, which separatists tried to occupy at night. According to the source, confrontations continued on the outskirts of the city at night. Gazeta.ru notes that the winner of Ukraine’s presidential elections, Petro Poroshenko, has announced plans for a trip to the Donbass as his first official visit. The newspaper reports that the authorities of the self-proclaimed Donetsk People’s Republic have declared that they are ready to negotiate with Poroshenko, but “only with Russia as the moderator.” The negotiations would involve a discussion of two key topics: “the exchange of hostages and the withdrawal of Ukrainian occupying forces from the DPR.”

Nezavisimaya Gazeta tells its readers about Petro Poroshenko’s initial plans as president of Ukraine. In spite of the fact that the new President’s inauguration will not take place until mid-June, Poroshenko might travel to Warsaw, where he will meet with U.S. President Barack Obama and the leaders of Central and Western Europe, even before he officially becomes president. Moreover, he plans to visit Moscow immediately after his inauguration, since “it is impossible to talk about the security of the region without Russia’s participation,” the publication reports. The newspaper also lays out Poroshenko’s preliminary policy statements. He said that Ukraine’s plans for European integration will not change because “this foreign policy course was supported by the popular vote.” At the same time, the publication notes that Poroshenko needs to quickly assemble a team capable of pushing through the series of reforms demanded by the Maidan. Nezavisimaya Gazeta highlights that Yulia Tymoshenko immediately recognized her opponent’s victory. According to Tymoshenko, “the people, first of all, want the president to end the war and re-establish order in eastern regions, and second, they want economic recovery and development.”

Nezavisimaya Gazeta also writes about the trilateral energy supply meeting in Berlin between Russia, Ukraine, and the EU that took place on Monday, May 26. The publication writes that EU Energy Commissioner Gunther Oettinger has “unequivocally demanded payment of the Ukrainian debt to Gazprom.” At the same time, the newspaper states that the EU thinks Ukraine “should pay off debts for Russian gas from the funds provided by its Western partners to stabilize the economy.” However, new Ukrainian leader Petro Poroshenko has yet to establish repayment deadlines. According to the newspaper, his last statement was “campaign-style” rhetoric, as if the elections were still in progress: “Everything was looking bad for me, but now everything will be okay.” Moreover, the newspaper states that Poroshenko has declared that Ukraine will fight for energy independence.” However, Nezavisimaya Gazeta is unclear about “whether Ukrainian negotiators have received new instructions for resolving the gas crisis or if they plan to continue avoiding discussions regarding repayment terms.”