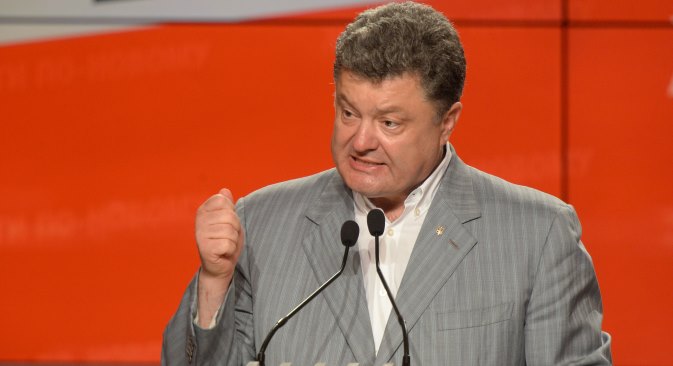 A correspondent from the newspaper Kommersant got the opportunity to speak one-on-one with Petro Poroshenko. The conversation was muddled, but it was the first interview with the newly elected president of Ukraine.

Concerning federalization. You regularly say that Ukraine is a unitary state and that there will not be federalization. Why? If you look around, there are many federated states nearby: the Russian Federation, the Federal Republic of Germany, etc…

“How about Poland, Belarus…well? No. Not Poland, not Belarus, not Moldova… No, there are no federated states around us. There’s Germany and that’s it.”

Is it possible to actually agree on what these terms mean? Is there really a difference between decentralization and federalization?

“Yes, there is a difference, because decentralization is when we, on one hand, maintain the authority of a strong center, and on the other hand, give rights to the regions. We provide communities with the right to solve the majority of their own problems for their own people, without having to go to the center to decide.”

What sort of problems?

“In particular, problems that might worry or upset the Russian-speaking population. For example, what language they will speak. Why is anyone asking about a second official language? Why are we trying to force a citizen who lives in Ternopil, Lviv, Zhitomir, Vinnytsia, Poltava, Chernihiv, or Cherkassy to recognize Russian as a second language? There’s no need to do that. We have a particular status quo, and any changes should be made for the purpose of solving problems. But what if the changes disrupt people’s lives?”

Of course, they shouldn’t be forced. But residents of the Donbass should also be allowed to speak Russian, and this right should be legally formalized so that they won’t be afraid someone will just take it away.

“A resident of the Donbass, for example, thinks that the problem is that he doesn’t have an official language that he can use in full measure for everything in his life. Not only in ordinary life — because today you can speak in any language at home or at work or wherever else and there is no problem, as you know as well as anyone. When you are speaking to a local government body, in court, or any other place in Russian, there also is no problem. But the right to defend this right… a person could possibly want to demand that.

“Okay, fine, I also demand that everyone around me in Donbass speak to me only in Russian if I want them to. You have the right. This is a community’s right. So, if a community decides they want to speak Russian, then let them speak in Russian. Maybe somewhere in Yenakiieve [a city in the Donetsk Region –Ed.] they want to speak English. It is your right. This right should be granted. No one can limit it. This is decentralization.”

Do you agree that there was a forceful seizure of power in Ukraine?

“Who told you that?”

We saw it ourselves live on TV.

“Where did you see that? What forceful seizure? Who seized what? Tell me. On December 1, as you surely know, since it was broadcast on every television network in the world, I stood up for the police and prevented any forceful seizure of any administrative building.

“My principal position, which I’ve maintained throughout the whole conflict, is that I am fundamentally opposed to the seizure of any buildings. Today it is clear that the vast majority of Ukrainian citizens supported my position. So, excuse me, but the position that some people try to use to justify their actions, the position that there is no legitimate government in Ukraine, is cheating.

“When some people try to justify a foreign government’s military invasion of the territory of another state — that’s called a violation of international law, it’s called an act of aggression. It is neither a good thing nor a bad thing. I am speaking objectively here. It is simply a position. If we think we can bring this to an international court — to the international court in the Hague, or at the UN — then let’s choose the court and let them decide. This is also one of the options that we have.”

But we can already imagine what they will say at The Hague.

“Then find another court. Find a court in Stockholm.”

We don’t have one…

“Yes you do. There is the St. Petersburg International Arbitration Court for the resolution of commercial disputes in the CIS. I just participated in signing an agreement on free trade in the CIS that promises the court will work. Okay, but this isn’t constructive.”

So you’re saying that there are no courts in the world that would be able to decide on these kinds of inter-governmental problems? There are. The UN was founded for exactly this.

“So look: Today, as a result of its actions, unfortunately, Russia is in international isolation.”

Well, Vladimir Putin’s visit to China doesn’t speak to the fact that Russia finds itself in international isolation.

“Well, fine. I’m not saying this malevolently. I am speaking about the high price that everyone pays today.”

You’re speaking with sympathy, then?

“Of course. This isn’t pleasant for me, the isolation, I mean. I am definitely not happy about it, absolutely not. I have sympathy. This high price that the whole world — and especially Russia and Ukraine — is paying just isn’t worth it.”

I wanted to ask: Did you want to become president?

“I bear it like a cross, if you understand the analogy.”

Will you pay for gas?

“For gas? Will we pay for gas? Of course we will, depending on the price.”

“I am not currently in the business.”

But you have a point of view.

“I think that the government of Ukraine isn’t obligated to do anything. We have business entities and we have agreements between business entities that are always changing; so whether $260, $460, or $550, it’s not a market price. I would like to pay the market price for gas. I don’t want to pay a political price.”

But right now the existing debt must at least be paid?

“Is there a debt for the seizure of our Chernomornaftogaz assets? Do you have to pay for those? You seized our Ukrainian wells, shouldn’t someone pay for that? The well yields gas. There are Ukrainian investments from the government budget in those wells. Who will pay? What do you think, shouldn’t someone pay? The wells are on the territory of the Kherson region. Paratroopers landed there.”

Well, we would need to discuss that separately…

“Look, how interesting. We must pay our debt, you say, but the seizure just needs to be discussed. We need to discuss everything.

“Look, you asked me whether we need to pay our debt? I am saying: We need to discuss all of these questions.”