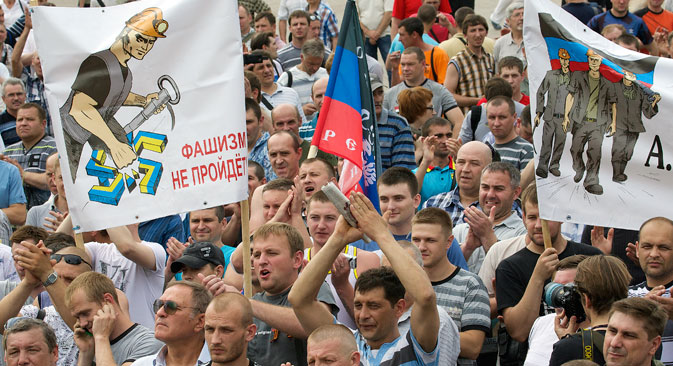 RBTH presents a selection of views from leading Russian media on the continuing military operations against pro-autonomy militias in eastern Ukraine, new president Petro Poroshenko’s announcement that he is ready to discuss decentralization, and a new development in the ongoing dispute over gas payments.

Nezavisimaya Gazeta writes that: “the authorities of Ukraine celebrated the conclusion of the presidential elections with air strikes and heavy shelling of rebel territories in eastern Ukraine.” According to the publication, at least 500 people have been killed in the punitive operations conducted in the Donbass and the Luhansk Region.

Nezavisimaya Gazeta suggests that the intensity of the fighting will only increase in the near future, because the new president of Ukraine, Petro Poroshenko, said he supported the continuation of the anti-terrorist operation, but requires “a change in its format”. The newspaper notes that, according to the politician, the “anti-terrorist operation should be shorter in time and more effective, and it should not stretch out for months, but should be completed within hours”.

This means, the publication writes, that Poroshenko has authorized large-scale application of arms and troops against the citizens of his own country. “In trying to solve the problems and settling of the conflict with supporters of federalization of the country, he seems determined to do so not by negotiations, but rather by using military force,” Nezavisimaya Gazeta concludes. Unlike his predecessors, the new president of Ukraine, writes the publication, is ready to strengthen the army and increase its personnel.

The newspaper notes that to settle the crisis requires very little – stopping the punitive operations and holding of negotiations with supporters of federalization. However, for now, preference is being given to strong-arm tactics.

Kommersant reports that the president-elect of Ukraine, Petro Poroshenko, has announced his readiness to discuss the idea of ​​decentralization of the country. However, Kommersant notes that Russia is in no hurry to recognize the new president as legitimate, and any talk about a meeting between Russian President Vladimir Putin and Petro Poroshenko “is still premature.”

The newspaper discusses the creation of a powerful system of decentralization of power. As a model of federalization, Kommersant suggests that Ukraine can draw on the experience of Denmark and Greenland. A single state with two different trade regimes, Denmark is a member of the EU, while Greenland is not. The newspaper noted that “it is theoretically possible to allow two trading regimes within one country. Despite the fact that this design seems a bit artificial, it is nevertheless possible.”

Kommersant also reminds readers that Poroshenko still hopes to sign the full text of the Association Agreement between Ukraine and the European Union, of which the political part was signed by Kiev and Brussels back in March of this year.

Gazeta.ru reported that Ukraine wants to get one billion dollars from the Russian side: Naftogaz is ready to settle its accounts for gas supplies with Gazprom, but only after the Russian company pays the Ukrainian company for 2.2 billion cubic meters of gas being stored in reservoirs located in Crimea.

In Crimea, according to Gazeta.ru, they are saying that the reservoirs contain much less gas than Ukraine claims. In addition, the publication notes that “there will be no direct negotiations between Moscow and Kiev without the participation of intermediaries from the Western countries.”

However, in Moscow, Gazeta.ru notes, they are willing to negotiate with the new Ukrainian government, and moreover, the Russian government is counting on a constructive dialogue. Gazeta.ru refers to the words of the head of Gazprom Alexei Miller, who has even announced: “Russia is ready to make concessions on the issue of lowering of gas prices for Ukraine.”

According to Miller, this can be done by reducing export duties. However, such a discount will not be discussed until Ukraine pays at least part of its debt for fuel that has already been delivered. According to Gazeta.ru, the situation is complicated by the fact that on the Ukrainian side, there is no single position on the gas issue