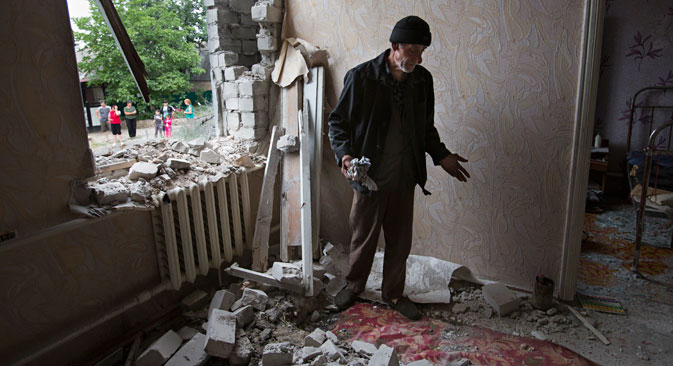 After activation of special operations in the Donbass, Petro Poroshenko made a promise that “Ukrainian soldiers will no longer go naked, barefoot and hungry.” Source: AP

RBTH presents a selection of views from leading Russian media, featuring debate on who will represent Russia at Petro Poroshenko’s inauguration as Ukrainian president, the reported return to Ukraine of citizens alleged to have fought as mercenaries for the Syrian rebels, and the dilemma facing Poroshenko as he tries to balance the country’s books.

Kommersant reports that the new president of Ukraine Petro Poroshenko will officially take office on June 7. However, Russian President Vladimir Putin most likely will not be present at the ceremony, writes the publication.

The President is not going to Kiev – “as he did not receive any invitation.” Kommersant assumes that in this case, at the inauguration, Russia will be represented by a diplomat from the Russian embassy. The question of exactly who this person will be “should be decided in the next few days,” the newspaper notes.

Usually in such cases, Russia is represented by its embassy chief, but Ambassador Mikhail Zurabov is currently not in Kiev, and therefore, this duty may be assigned to a “lower-ranking diplomat.”

However, according to the newspaper, Putin and Poroshenko may get a chance to talk as early as next week – both politicians have been invited by French President Francois Hollande to celebrate the 70th anniversary of the Allied landings in Normandy on June 6.

However, if the meeting between Putin and Poroshenko does take place, it will be informal. If Putin does make any bilateral contacts in France, in addition to talks with President Hollande, these “will not have an organized nature and will be, as they say, on the fly,” concludes Kommersant.

The newspaper Vzglyad writes that on Thursday, representatives of the General Staff of the Armed Forces of Russia reported that about 300 Ukrainian citizens alleged to have been fighting on the side of the rebels in Syria had returned home.

Now, according to the publication, they would be joining Ukraine’s “Right Sector” militants, taking part in punitive operations together with Ukrainian security forces in the southeast of the country. The newspaper recalls that the Security Service of Ukraine and the Ministry of Foreign Affairs of Ukraine have repeatedly stated that: “Ukrainian citizens were not involved in the fighting against the Syrian Government.”

However, in October last year, the Supreme Mufti of Syria, Ahmad Badreddin, gave specific figures: in total, around 100,000 mercenaries from 83 countries are fighting in Syria, 350 of them are allegedly citizens of Ukraine.

14 Ukrainian troops, including general, killed in helicopter crash near Slavyansk

Vzglyad also notes that, under international law, acting as a mercenary is not considered a punishable offence, however, according to the Criminal Code of Ukraine “the use of mercenaries in armed conflicts or activities” is punishable by imprisonment for up to eight years.

Nevertheless, the experts at the publication state that local investigative and judicial authorities must act to bring charges against violators, “which can hardly be expected in Ukraine.”

In addition, Vzglyad predicts there will soon be an escalation of violence and brutality from government forces taking part in the “punitive” operation in Ukraine.

Gazeta.ru has tried to identify the priority items that the new president of Ukraine Petro Poroshenko will be spending state funds on. He will have to choose, the newspaper writes, on what to spend “state revenues and loans from the IMF – on salaries and pensions or to repay the country’s gas debt.”

There is not enough money for everything, says Gazeta.ru, all the more so given that now the “costs of the civil war that has broken out in the country are constantly increasing.”

The newspaper reminds its readers that after activation of special operations in the Donbass, Petro Poroshenko made a promise that “Ukrainian soldiers will no longer go naked, barefoot and hungry.”

According to Gazeta.ru, the president-elect is ready to pay 1,000 hryvnia ($85) per day to volunteer soldiers (now they are paid just 600 hryvnia per month) and to insure the life and health of each soldier at 1 million hryvnia ($85,000).

It would therefore seem that Poroshenko has enough money to finance the war in its present dimensions, writes Gazeta.ru.

However, the new government has additional obligations – these include public sector wages and contractors that depend on state financing, as well as payment of pensions and benefits to citizens. “Plus there are the debts for Russian gas supplies,” the newspaper notes.