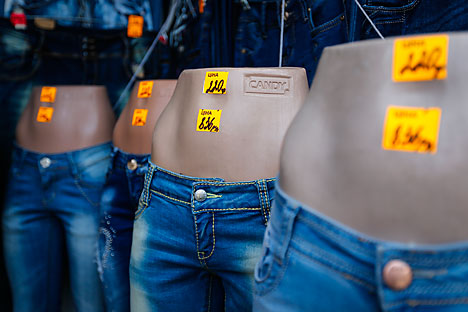 The Ukrainian hryvnia has become a foreign currency in Crimea and Sevastopol, while the Russian ruble has become the only legal tender on that territory. Source: Reuters

RBTH presents a selection of views from leading Russian media, featuring news on the switchover from the Ukrainian hrynia to the ruble in Crimea, alongside discussion of the composition of Ukrainian president-elect Petro Poroshenko’s administration and whether a dissolution of parliament is on the cards, and a preview of the next round of gas talks.

The Kommersant daily reports that starting from June 1, the Ukrainian hryvnia has become a foreign currency in Crimea and Sevastopol, while the Russian ruble has become the only legal tender on that territory. One can, of course, still buy and sell hryvnias, or open a bank deposit or take out a loan in hryvnias, like in dollars, euros or any other major currency.

Earlier, Kommersant points out, the Crimean authorities announced that at least throughout 2015, the Russian and Ukrainian banking systems will operate in parallel in Crimea under the control of the Russian Central Bank, and the hryvnia and the ruble will be in parallel circulation, with an administratively controlled exchange rate between the two (at first, the subsidized rate of 3.8 rubles to the hryvnia, to be later replaced by a lower rate).

Also, it was planned that Ukrainian banks in the two regions that have become part of the Russian Federation will be replaced by bank chains with a Russian license by 2016.

The paper notes that the scheme under which Crimea was supposed to have two currencies until 2016 was threatened by U.S. and EU sanctions against Russian banks operating in Ukraine.

The Ogonyok magazine looks ahead to the inauguration of the fifth president of Ukraine, Petro Poroshenko, due to take place this week.

Ogonyok observers are surprised that the leader of Ukraine's Radical Party, Oleh Lyashko, managed to come in third in the race. "He is a sort of equivalent to [controversial LDPR party leader] Vladimir Zhirinovsky, a politician who deliberately seeks to scandalize the public," writes Ogonyok.

The magazine points out that the question of who forms part of Petro Poroshenko's team remains as unclear as it was before the election. So far, the identity of very few members of it is known besides those who have been named by Poroshenko himself. One of them is clearly UDAR party leader Vitali Klitschko, who a month ago withdrew from the presidential race in favor of Poroshenko.

Another likely member of the new team, Ogonyok predicts, is first deputy head of the UDAR faction and Klitschko's right-hand man in politics, Vitali Kovalchuk, who headed Poroshenko's campaign headquarters and is now likely to head the presidential administration.

Ogonyok believes it would be logical for one of the first political decisions by the new president to be the dissolution of parliament. In that case, Poroshenko could lead the Solidarity party into a parliamentary election that may be held this coming fall. So far, according to Ogonyok, this is a little-known party that does not take any part in the country's political life. "However, on the strength of Poroshenko's name alone, this winter it could make it into parliament," the magazine concludes.

Nezavisimaya Gazeta previews the third, and probably the last, round of gas talks between Ukraine, Russia, and the EU. After the second meeting, which took place last week, a compromise was on the cards: Kiev transferred $786 million to Gazprom, which is expected to reach the Russian company’s accounts today. At the same time, Nezavisimaya Gazeta continues, Ukraine does not consider the issue closed nor rule out a possible gas crisis.

Therefore the Ukrainian parliament is planning to hold a hearing tomorrow to discuss threats to the country's energy security. In addition, the paper points out, Kiev is angry that "Europe is not taking into account the political circumstances of the gas dispute.”

NG adds that "unlike the dispute over Crimea, the situation with gas needs to be resolved without any delay.” "Otherwise, uninterrupted gas supplies to Europe next winter will be disrupted," the paper warns.