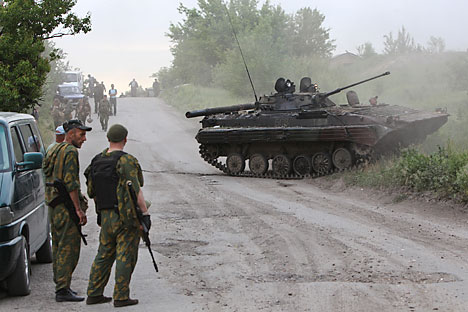 Gazeta.ru writes about the beginning of the next phase of the military operation in the Donbass. Source: Reuters

RBTH presents a selection of views from leading Russian media, focusing on renewed hopes for reaching a compromise in the Russo-Ukrainian gas dispute, the commencement of a new phase of operations in eastern Ukraine, and the controversy over the bombing of the Luhansk Regional Administration Building.

Ukrainian-Russian negotiations concerning the price of gas should be completed before the end of this week, says Nezavisimaya Gazeta. The publication says that Ukrainian Prime Minister Arseniy Yatsenyuk admitted the possibility of reaching a compromise, if Gazprom is willing to meet Kiev halfway. He referred to the price of $500 per 1,000 cubic meters as “not a market, but a political price,” and noted that “if Russia sees Ukraine as a cash cow, then it is deeply mistaken.”

After the third round of negotiations, with the participation of the European Union, recalls Nezavisimaya Gazeta, the delegations of Ukraine and Russia both softened their positions. Moreover, it was agreed that “neither one nor the other side would turn to the Stockholm Court for arbitration in the case. Nezavisimaya Gazeta tells its readers that the head of the Ukrainian government has admitted that “Ukraine could not do without Russian gas, as domestic production volumes have declined in recent years.”

In this situation, the newspaper believes, the Ukrainian government wants to achieve a partnership with the European Union in order to strengthen its position: Ukraine joined the European Energy Community during the presidency of Yanukovych, however, the country did not fulfill its obligations. This led to a cooling of attitudes towards the country among its EU partners, notes Nezavisimaya Gazeta. Ukraine is now embarking on attempts to prove to its European partners that it is a reliable transit country.

Nezavisimaya Gazeta writes that in Kiev they believe that the Russian side is “deliberately provoking gas crises to blacken the reputation of Ukraine and to make the European side look toward investing into the construction of bypass routes for the transportation of gas.”

Gazeta.ru writes about the beginning of the next phase of the military operation in the Donbass, following an announcement by the Ukrainian Special Forces that residents of Slavyansk, Kramatorsk and Krasnyi Lyman should not leave their homes. It is obvious, the newspaper notes, that Ukrainian troops are trying to break through to the centers of these settlements, where the headquarters of the rebel groups are located. In addition, according to Gazeta.ru, Interior Minister Arsen Avakov announced the destruction of checkpoints set up by the self-proclaimed Donetsk People’s Republic in that area. Attacks on these were carried out from the air, says the publication, while the rebels claim that “in the village there were virtually no armed men, just civilians.” According to Gazeta.ru, Ukrainian military helicopters are now flying patrols over the outskirts of Slavyansk, and roads into the city from Kharkov and Dnepropetrovsk are showing high concentrations of military equipment.

The newspaper Vzglyad states that independent observers have confirmed the guilt of the Ukrainian authorities in attacking the Luhansk Regional Administration Building from the air, which the Ministry of Defense of Ukraine still denies. “None other than OSCE inspectors announced that the building had been shelled by rockets fired from the air,” the newspaper writes.

According to the newspaper, the head of the People’s Republic of Lugansk Valery Bolotov believes that the targets of the bombing were the leaders of the breakaway republic. Vzglyad also reports that the leaders of the Party of Regions have announced that they are seeking an investigation by the International Criminal Court in The Hague into the actions taken by the Ukrainian military.

“The use of military aviation by the authorities against the civilian population is unprecedented in its cruel criminality. The only possibility to objectively establish the truth is to have an investigation into this war crime carried out by the International Criminal Court in The Hague,” said Oleksandr Yefremov, leader of the parliamentary faction of the party.

In addition, Vzglyad reminds its readers that the special OSCE monitoring mission is presenting daily reports on the situation in Ukraine. The most recent report indicates that many residents of the Luhansk Region are trying to escape from the area where ​​military clashes are taking place.