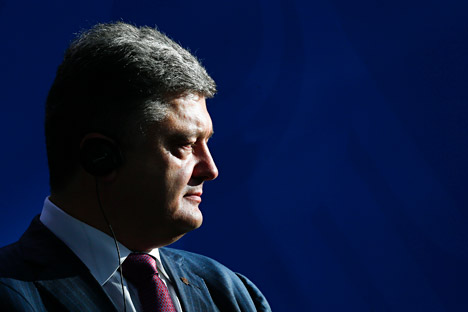 According to Kommersant Poroshenko has set himself a goal of bringing order to Ukraine within three months. Source: Reuters

RBTH presents a selection of views from leading Russian media, featuring news of Ukrainian President-elect Petro Poroshenko’s action plan to bring order to the country, discussion of the likelihood of Ukraine imposing a stricter border regime in response to arms smuggling, and an analysis of the motivation of those fleeing from eastern Ukraine into Russia.

The Kommersant newspaper tells its readers that Ukraine’s president-elect Petro Poroshenko has set himself a goal of bringing order to Ukraine within three months. The newly elected president, the newspaper writes, is now preparing an action plan to resolve the situation in the country – this should be presented immediately after his inauguration, which will take place on June 7.

Over 12,000 Ukrainian citizens arrive in Rostov region in past 24 hours - local authorities

According to Kommersant, the plan will consist of three parts: a dialogue inside the country, an international dialogue in Geneva or a more representative format, and negotiations with Russia. “Only by working on all these three components, can a de-escalation be achieved and the situation in and around Ukraine stabilized,” the newspaper notes. The action plan, according to the publication, proposes a profound reform of local government, which will be based on the Polish experience: It provides extraordinary elections to local councils and the decentralization of power “on the Polish model”, namely, “real authority” will be given to the regions. At the same time Ukraine will remain a unitary state – the term “federalization” is studiously avoided, emphasizes Kommersant.

Another, of course, very important point in Poroshenko’s plan is a broad amnesty, something that should help resolve the situation in the east of the country. Among the economic reforms planned by the new head of state is the diversification of energy supplies, and to achieve this, according to the publication, the United States and the European Union have promised assistance to Kiev.

Nezavisimaya Gazeta quotes a statement made by Poroshenko, who claimed that: “Kiev had substantial evidence of Russia’s support for the rebels in eastern Ukraine, in particular by supplying weapons and military personnel.” The publication says that in Kiev they are convinced that “Russian border guards not only failed to respond to messages from their colleagues in Ukraine about preparations for illegal crossings of the border from Russia, but even actively assisted the offenders.”

Ukraine, writes Nezavisimaya Gazeta, allegedly has “convincing evidence that Russian citizens are involved in the activities of terrorist groups in the Donetsk and Luhansk regions,” and “the Security Service of Ukraine has discovered and arrested Russian spies in other regions as well.” The Ukrainian side is regularly sending all this evidence to representatives of international organizations, including the UN and the OSCE, the newspaper notes.

In addition, the Nezavisimaya Gazeta emphasizes that “in Kiev they believe that Russia is playing political games.” Therefore, according to the publication, Ukraine is ready to move to the next step: a stricter border-crossing regime with Russia, as well as the introduction of martial law in the Donetsk and Luhansk regions. “In the Verkhovna Rada, calls were once again heard to close the border with Russia and to introduce a visa regime, and while the politicians argue, the military has decided to strengthen security at the borders,” sums up the newspaper. In this regard, according to Nezavisimaya Gazeta, the United States is ready to provide technical assistance to Ukraine.

Novaya Gazeta writes about events taking place at the Russian-Ukrainian border. The publication notes that Acting President Alexander Turchynov has “cut off” part of the border between Russia and Ukraine, noting that this will minimize the “opportunity to smuggle weapons into the territory of Ukraine.” According to Novaya Gazeta, Ukrainian customs officers do not always follow Kiev’s orders, and “at some crossing points they have just stopped letting vehicles through, and refugees are allowed to cross on foot.”

Novaya Gazeta writes that “those who do not wish to have a stamp placed in their passports are ‘crossing on their own’ – among them families owning medium-sized businesses and previously influential people who do not want the Security Service of Ukraine to know about their having left the country.” The publication reports that the volunteers helping refugees leave and providing humanitarian aid transport “even tried to negotiate with smugglers, but the requested price of 20,000 rubles (about $570) per person, was simply too much.”

Novaya Gazeta notes that most of those crossing the border are apolitical people who “do not want to fight, do not want to take up arms, but have found themselves in a conflict zone, and some had friends or relatives that have already been killed.” “Each of them is asked if they plan to stay until the war ends or in the future obtain Russian citizenship – depending on their wishes, the documents are processed differently,” says the publication. In addition, Novaya Gazeta emphasizes that soon Moscow may also be faced with a refugee problem, as many people from Ukraine are heading for the Russian capital, and places will be need to house them all.