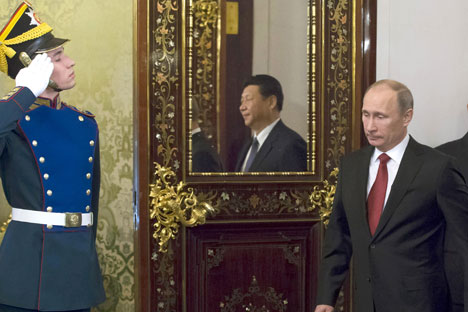 Russia Direct’s new monthly memo outlines both the risks and opportunities that closer political and economic ties with China pose for Russia.

Amidst the heated debates about the future of Russia-China collaboration, Russia Direct has released a new monthly memo - “Russia reorients to the Orient” - that describe the implications of collaboration between Moscow and Beijing for the world. The report presents several scenarios for the development of the Russia-China relationship.

“In a best-case scenario, China will become a reliable trade and technology partner capable of supporting Russia’s economic development in the Far East,” the report suggests. “In a worst case scenario, Russia may find itself deferring to China on important strategic issues as a result of its continued reliance on commodity exports for economic growth.”

At the same time, the report clarifies how recent economic developments – like the $400 billion gas deal between Gazprom and China National Petrolium Corporation (CNPC) – will impact Russian foreign policy in the Asia-Pacific region.

“For both Russia and the West, economic growth in China is the key to resolving a number of long-term domestic growth issues,” wrote the author of the report Vassily Kashin, Senior Research Fellow at the Moscow-based Center for Analysis of Strategies and Technologies.

“While the U.S. pivot to China has been largely unsuccessful, Russia’s pivot to China shows promise of building the foundation for the nation’s long-term economic development.”

Kashin points to the Ukrainian crisis that, according to him, has significantly catalyzed Russia-China economic and political collaboration.

“Throughout the crisis, China has been careful not to express its direct support for any side,” he argues. “Despite the restraint of the country’s official statements, China’s steps in forging closer practical ties with Russia, as well as Chinese media coverage of the Ukrainian situation, have left no doubt that Beijing’s sympathies lie strongly with Moscow.”

In the report, Kashin describes in detail different aspects of Russia-China collaboration, including the energy deal between Gazprom and CNPC, bilateral military-technical cooperation, joint initiatives in space exploration and aviation as well as energy infrastructure projects such as the “Power of Siberia” gas pipeline, through which Russian gas will flow to China and which costs $70 billion ($20 billion more than the Sochi Olympics).

What specific opportunities and challenges does China present for Russia? What will dominate in Moscow-Beijing collaboration in the future: rivalry or partnership? Will two geostrategic rivals be able to find common ground? Subscribe and download the full version of the report to find out.