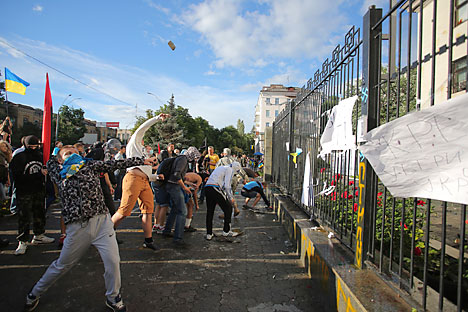 The Russian embassy in Kiev came under attack on Saturday. Source: Reuters

RBTH presents a selection of views from leading Russian media, featuring discussion of the significance of Saturday’s riots outside the Russian embassy in Kiev, Russia’s outrage over the West’s failure to condemn the acts, and NATO plans to offer Ukraine aid in reforming its defense sector.

In an article headlined "Poroshenko is being threatened by yet another Maidan,” the Nezavisimaya Gazeta centrist daily says that in response to growing public discontent, which manifested itself in the rioting outside the Russian embassy in Kiev on Saturday, June 14,  President Poroshenko has promised a "determined and targeted action.”

A turning point in the public mood came on Saturday morning when it was reported that a Ukrainian Ilyushin Il-46 military transport aircraft with 49 people on board had been shot down when landing at Lugansk airport in the east of the country.

Poroshenko to submit proposals on constitutional reform to Rada this week

The West condemned the pro-Russia militia who downed the plane, while European Council President Herman Van Rompuy said that "the Ukrainian government has an obligation and a duty to restore order within its borders.” The Ukrainian public reminded Petro Poroshenko of the main promise of his election campaign: To restore order and peace quickly.

However, Nezavisimaya Gazeta points out, Poroshenko has become hostage to the situation: He promised to quickly restore order in the hope of peace talks but came up against resistance from a group of senior military and law-enforcement figures in Ukraine, who are – for whatever reason – determined to continue military action. Society too has split into two camps: one wants a peaceful resolution, while the other demands a complete military victory over the armed separatists. "Whatever Poroshenko does, he may have to face a new Maidan," the paper predicts.

An expert quoted by the paper says that the Ukrainian president should choose one of two options: "Either focus on an economic revival, which would require getting down to the negotiating table with all those who have an influence over the situation in eastern Ukraine,” or listen to the hawks and wage this war until securing a victory.

The Kommersant daily reports about a new phase in the Russian-Ukrainian standoff, as the Russian embassy in Kiev came under attack on Saturday. Moscow reacted angrily, condemning "the Ukrainian authorities' inaction and Foreign Minister Andriy Deshchytsia's behavior," [Deshchytsia used an expletive phrase to describe Russian President Vladimir Putin while speaking to crowds outside the embassy – Editor’s note]  the paper points out. It is unlikely that diplomatic relations between the two countries will be severed, although Russia may resort to some sanctions, Kommersant predicts.

The paper adds that Moscow was also outraged by the West's reaction to the incident. "Although the European Union and the U.S. condemned the attack, Russia's initiative at the UN Security Council to adopt a statement to that effect was rejected by the West, with the UK, the U.S., and France voting against it," says Kommersant.

Experts polled by the newspaper conclude that the offensive chant performed by Ukraine's acting Foreign Minister Andriy Deshchytsia "will become his swansong" and that his resignation is just a couple of weeks away, "since he commits such outbursts that damage President Petro Poroshenko's image and his peace plan," Kommersant explains, adding that "attempts are being made to torpedo" President Poroshenko's peace plan. An expert cited by the paper suggests that "the protest [outside the Russian embassy] may have been intended to divert attention from the failed Russian-Ukrainian talks on gas.”

The Vzglyad newspaper points out that NATO intends to assist Ukraine with reforming its defense sector. According to Vzglyad, NATO Secretary General Anders Fogh Rasmussen's statement is yet another proof that Russia's concerns as regards the alliance bringing its military infrastructure closer to Russian borders are justified. Furthermore, the paper adds, NATO is preparing a set of measures "to contribute to improving Ukraine's defense capability".

Fogh Rasmussen also stressed that cooperation with Kiev will have an "exclusively practical focus and will allow Ukraine, for instance, to have access to NATO military training.” The NATO secretary-general's words, Vzglyad says, only "confirm the fears of militiamen in southeastern Ukraine,” who were concerned that after Ukrainian President Petro Poroshenko's inauguration, the situation for supporters of the Donetsk People's Republic will get only worse.”

The newspaper recalls that Western countries have made promises of military assistance to Ukraine before. However, experts polled by Vzglyad say that Ukraine currently simply does not have the money to pay for arms supplies.

No other significant assistance from the U.S. is to be expected, a pundit cited by the newspaper warns Ukrainian military and law-enforcement authorities. "The Americans themselves are saying that they have no intention of supplying arms to Ukraine. Furthermore, the Americans do not want to engage in a direct conflict with Russia," Vzglyad concludes.