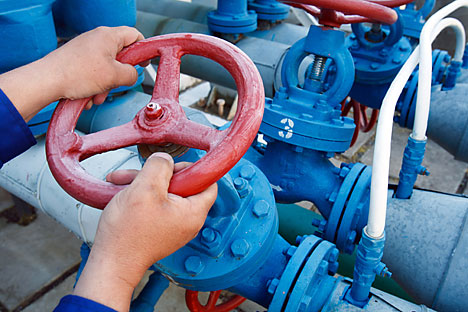 Gazprom has switched to requiring advance payment from Naftogaz on deliveries of natural gas on June 15. Source: AFP / East News

RBTH presents a selection of views from leading Russian media on the latest gas crisis between Moscow and Kiev, which culminated yesterday with Russia cutting off supplies to Ukraine after talks had once again reached a dead end.

The gas issue was the centerpiece of today’s reports in the Russian press. The newspaper Kommersant writes that the two-month gas conflict between Russia and Ukraine, with the involvement of the European Commission, has culminated in supplies to Kiev being cut off. According to the newspaper, Gazprom has transferred Naftogaz Ukrainy to a prepayment plan due to its chronic debt. The companies were unable to arrive at a solution at the negotiating table.

Because Kiev failed to make an advance payment for June, Russia has terminated gas supplies to its neighbor; Gazprom is only sending transit gas through Ukraine’s gas transport system, Kommersant reports. As a result “of the first stage of the war, Gazprom has only received a minor portion of the debt and lost 5 billion cubic meters of gas, which Ukraine has pumped into its storage facilities,” the newspaper writes.

Explosion occurs on gas pipeline in Poltava region of Ukraine

After numerous payment delays, Moscow has decided not to take up the European Commission on its proposal to compromise and accept a gradual repayment scheme. Kommersant characterizes Kiev’s position as blackmail. According to the newspaper, “Kiev wanted to disrupt the negotiations from the very beginning and to bring relations in the gas sphere to an acute confrontation.”

Kommersant quoted Russian Prime Minister Dmitry Medvedev as saying that “part of the Ukrainian leadership has lost its validity.” “Kiev has been receiving free gas and has gained time, and the European Union has been helpful by giving Ukraine money and getting nothing in return,” he said.

The position of Brussels, which is no longer willing to support Kiev only for political reasons, will be a crucial factor in the new stage of negotiations, which will inevitably take place closer to the fall, Kommersant writes.

Reporting on the same topic, the newspaper Vedomosti writes that Russia, Ukraine, and the European Commission attempted to reach an agreement on how to resolve Ukraine’s gas debt problem and to prevent Gazprom from moving Naftogaz to a prepayment plan. According to Vedomosti, the disruption in supplies could threaten gas transit to Europe.

Ukrainian Prime Minister Arseniy Yatsenyuk was largely responsible for the breakdown in negotiations, saying that “Ukraine does not agree with the discount that arises from excluding the export duty from the price and which is therefore actually being set by the Russian government, which could cancel its decision at any moment.”

According to Vedomosti, the European Commission is particularly concerned that Ukraine could use gas from its storage facilities to make up for the shortfall, leaving its supplies depleted before winter.

In order to ensure an uninterrupted flow of transit gas during the winter, Ukraine needs to have 18-19 bcm of the fuel in its storage facilities by fall. If problems arise with transit, Gazprom will boost supplies through the Yamal-Europe and Nord Stream gas pipelines, as well as pump gas into European storage facilities, the newspapers writes.

According to Vedomosti’s experts, the last thing that Gazprom and Russia want is a repeat of the events of 2009.

“The introduction of the prepayment envisaged in the contract was preceded by two months of incredible flexibility on Gazprom’s part. Obviously, Gazprom is willing to reach an agreement, but Ukraine continues to prefer to speak in the language of ultimatums,” the newspaper writes.

Expert reports that Russia has refused to continue to defer the deadline for Ukraine to repay its gas debt. As a consequence, Ukraine has been transferred to a prepayment plan, the publication writes.

The European Commission, which is acting as the mediator in the Russia-Ukraine dialogue, is suggesting that the two countries sit back down at the negotiating table to convince Russia that it should adopt a “compromise” solution on differentiated prices. Under this compromise, Ukraine would pay Russia $1 billion as soon as possible and pay the remainder in six tranches by the end of the year.

In exchange, Gazprom would set two different gas prices, depending on the time of year. However, according to Expert, Russia is not satisfied with this solution because “Ukraine will just buy the maximum amount of gas in the summer at $300, pump it all into its storage facilities, and then use it in the winter.”

Ukraine, meanwhile, is refusing to pay, “shifting the issue from the economic and political plane exclusively to the political plane,” Expert reports. Kiev is currently searching for ways to survive the termination of Russian gas supplies. According to Expert, the Ukrainian authorities are even considering restricting gas supplies for industrial facilities to a technical minimum.

In the meantime, the Europeans need to take precautionary measures. According to Expert, Moscow is hoping that the problems with Ukraine will not only force the European Union to cancel the requirements of the Third Energy Package, but also give impetus to the South Stream project.