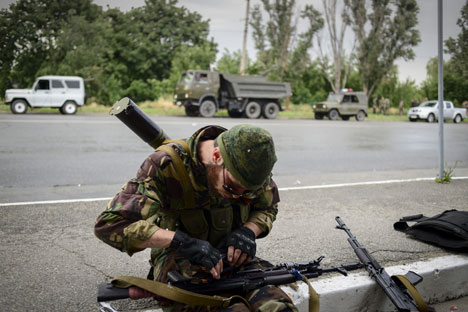 RBTH presents a selection of views from leading Russian media, featuring an analysis of Ukrainian President Petro Poroshenko’s proposal for a ceasefire in the east of the country, ongoing coverage of the gas crisis, and an interview with a “political technologist” who participated in organizing the referendums in Crimea and the Donbass.

The newspaper Kommersant reports on the first steps of new Ukrainian President Petro Poroshenko as part of his plan to settle the domestic crisis. Poroshenko has announced an upcoming ceasefire in the east and pointed out the need for the immediate support for a peace plan from all participants in events in the Donbass “as soon as possible.”

The president did not give any specific dates for the moratorium, saying only that it would be soon. Furthermore, Poroshenko proposed creating “a corridor along which Russian mercenaries could leave Ukrainian territory with their weapons,” Kommersant wrote.

Kommersant’s experts called Poroshenko’s first steps “completely optimistic.” According to the newspaper, the new Ukrainian president has fired “disgraced chief diplomat Andrii Deshchytsia” and will replace him with Pavel Klimkin, who is more tolerant of Russia.

This will strengthen Poroshenko’s position, Kommersant reports. Klimkin is a “professional, suitable in terms of Russia, and capable of negotiating with it,” the newspaper writes. By opting for Klimkin, Poroshenko is sending a message that “he will not take the path of war, but will instead aim for reconciliation.”

Expert is of the opinion that Poroshenko’s “plan” is nothing more than a proposal to surrender. “In response to the ceasefire, the militias are being asked to disarm and vacate occupied buildings,” Expert reported. They have effectively been denied amnesty, as it will only be granted to those who did not commit serious crimes; that is, those who did not kill any Ukrainian soldiers. In response, “Poroshenko proposes merely the mythical decentralization of Ukraine,” Expert wrote.

In Expert’s opinion, based on Poroshenko’s inauguration speech, “this decentralization entails neither federalization nor official status for the Russian language.” It therefore comes as no surprise that the leadership of the Donetsk People’s Republic rejected Poroshenko’s plan. Besides that, the new president is considered to be completely incompetent in the region; he is attempting to negotiate, but “not with the people he needs to negotiate with, with those who really represent the rebellious Donbass, but rather with the people he likes,” Expert reported.

Nezavisimaya Gazeta is continuing to cover the gas issue. According to it, Ukraine fears that it will be unable to strike an agreement with Gazprom and is preparing to introduce a state of emergency in the energy sector.

Kiev is not holding out hope of finding a swift resolution to the conflict; it actually expects the situation to get worse, the newspaper wrote. In order to solve the problem, a crisis energy headquarters has been established in Kiev to control the country’s energy balance.

“If the parties do not come to an agreement and Russian gas supplies do not resume, there could be a very difficult situation in the fall, and the likelihood of such a turn of events is high,” Nezavisimaya Gazeta reports. Ukraine and Russia “are in a state of war, and energy policy is just one of the elements of that war,” the newspaper wrote.

The day before, Gazeta.ru published an anonymous interview with a Russian “political technologist” who worked on the referendums in the Crimea and Donbass.

According to the technologist, “the Crimean referendum did not need political technologies,” so Russian consultants primarily helped solve technical issues. “There were specialized experts there that brought the language in line with the latest precedents in international law and helped conduct the voting,” the technologist said.

Lawyers, historians, and culturologists were the main contributors to the Crimean referendum, while political technologists – people involved in forming public opinion – were not needed. According to the political technologist, this was “because the level of expectation and the level of support by the Russian authorities obviated the need to improve voter turnout and the like.”

“Crimeans were a lot more interested in joining Russia at any price, rather than in any utilities, healthcare, or wage problems that are characteristic for the average voter,” the technologist said.

The referendum in the Donbass was “primarily demonstrative, without any serious calculations for accordance with international norms.” The ballots did not contain any degrees of protection, and the election commissions were appointed by the new authorities on dates that were not envisaged by any laws.

“The demand for a referendum [in the Donbass] was a lot lower,” the technologist told Gazeta.ru. “In that case, political technologists really had a lot of work to do. Their task was to formulate the ideas of the protest movement. It’s a mining region, where the idea itself of joining Russia wasn’t particularly tempting.”