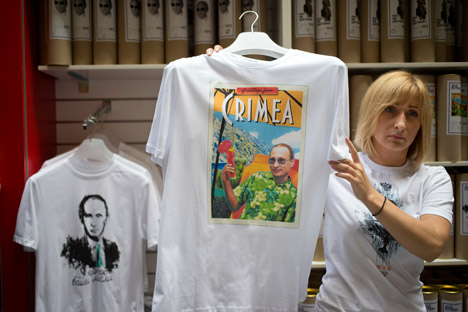 RBTH presents a selection of views from leading Russian media, featuring a report on the “roadmap” toward the agreement of association between the EU and Ukraine, the problems facing Crimean exports, and news of moves by Ukraine to invite U.S. and European companies to join its gas transportation system, which could block construction of the South Stream pipeline.

The Kommersant daily newspaper says that the so-called "roadmap" for realizing the agreements of EU and Ukrainian association, the economic part of which is planned for July 27, has been published. The "roadmap" intends to stabilize the country's economic and financial situation and will help Ukrainian officials enact the association agreements.

Under the banner of European integration, the Ukrainian government will have to reform everything: from the prosecutor's office to education and its constitutional regime, and within a timeframe that is considerably smaller than the one the last EU countries to be admitted had at their disposal.

The "roadmap's" reform agenda, according to the publication, consists of ten parts that deal with political processes; economic support; trade and its administration; agriculture; justice and the fight against corruption; entrepreneurship and energy; transportation; education; science and innovation. The text suggests that the EU is ready to offer Ukraine greater integration, reports Kommersant.

However, one of the key requirements of the plan is the realization of an all-embracing constitutional reform, whose deadline is fall 2014. This reform consists of the decentralization of power and the "delegation of a significant part of the president's competencies to territorial communities and local councils."

The newspaper notes that local and judicial powers will also be reformed. Kommersant reminds its readers that Moscow's main warnings to the Ukraine concern the commercial part of the agreements, whereby Ukraine may lose its free trade with Russia.

Gazeta.ru has published an article about how European officials are considering, as part of the overall package of sanctions, to prohibit imports of goods from Crimea. According to the article, the limits will neither seriously affect the peninsula's producers, nor European consumers.

The sanctions, says "Gazeta.ru," will not have grave consequences because the Crimea possesses mechanical engineering, construction and chemical industries whose production is in demand on the European market.

The suppliers are not expected to experience big problems, just as European consumers will also not see any losses, the publication states. More than the sanctions, it is the transitory period that poses the biggest problem from the Crimea: the Ukraine has refused to import Crimean products, while Russia is still not ready to accept it in sufficient quantities.

Nezavisimaya Gazeta writes that Kiev is asking Europe and the U.S. to battle the South Stream project, while Naftogaz blames Gazprom for creating further risks for transit gas. The newspaper says that Ukraine is inviting European and American companies to join its gas transportation system, offering them a 49 percent share in exchange for the modernization of its infrastructure. This kind of consortium, according to the newspaper, could threaten the construction of the South Stream project, which would make Ukraine a transit country that could not be bypassed.

However, as Nezavisimaya Gazeta notes, the profitability of investing in Ukraine's gas transportation system is not guaranteed, since Russia may soon decide to nullify transit gas through Ukraine. The newspaper believes that Kiev's cooperation with Europe and the U.S. may prevent the construction of South Stream.

It is for this reason, the newspaper writes, that Moscow's reaction has been prompt: An official statement says that the fate of Ukraine's gas transport system by definition cannot be resolved without Russia's participation, since "the portion of Russian gas that is transferred to Europe is very big."

In a global economy, can Russia go it alone?

Moreover, Nezavisimaya Gazeta emphasizes that without the Russian factor, Ukraine's gas transportation system, "especially in its current state, does not have much appeal for anyone."

The newspaper notes that Russia is currently the subject of a policy of international isolation. “Circumventing the UN Security Council, the U.S. has initiated economic sanctions against our individual entrepreneurs, which hit everyone - enemies and friends alike," writes Nezavisimaya Gazeta. However, according to the article, American companies will collaborate with Kiev only if their government asks them. "But this may not be a very sensible move," concludes the newspaper.