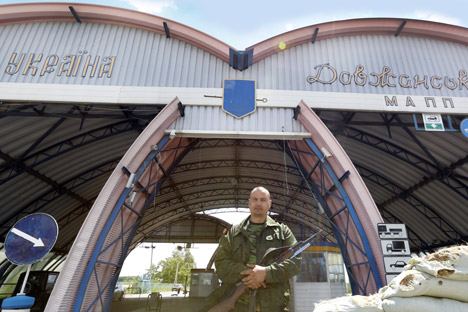 In the past several days, the Kiev authorities have on at least two occasions announced that they have the whole of the Ukrainian-Russian border under their control, preventing military hardware from moving "in either direction.” Source: ITAR-TASS

RBTH presents a selection of views from leading Russian media, featuring news on new legislation being passed by Kiev in reaction to the cancelation of Russian gas supplies, the large-scale economic reforms facing Ukraine, and debate on the issue of the country’s border demarcation.

The Kommersant daily looks at the latest developments in the Russian-Ukrainian gas dispute: As part of adjusting for the cancelation of gas supplies from Russia, the Ukrainian government intends to introduce emergency mechanisms for regulating the country's energy sector.

The new regime, according to Kommersant, will make it legal to cut off supplies to industrial consumers, force consumers to buy gas from independent producers and siphon off Russian transit gas.

The bill envisages the introduction of a special period if energy supplies to Ukraine are stopped or restricted. During that special period, energy industry companies will have to follow the Energy Ministry's instructions "irrespective of the terms of earlier signed agreements.”

The contract between Gazprom and Naftogaz for the transit of Russian gas to Europe may therefore be under threat too. In addition, the draft law allows the state to intervene in the operation of gas distribution companies and authorizes the cancelation of gas supplies to consumers other than households and heating power plants.

Experts polled by Kommersant agree that the bill is necessary as supplies of Russian gas come to an end. Besides, industrial consumers will not be cut off from gas supplies without a warning and some preparation. "It is necessary to switch as many manufacturers as possible to solid fuel, electric heating, and fuel oil," the paper concludes.

Gazeta.ru gives an overview of the economic reforms Kiev will have to carry out as part of its association agreement with the European Union. Ukrainian President Petro Poroshenko is due to sign the economic part of the agreement this week.

One of the key requirements of the "roadmap" is an all-encompassing constitutional reform, together with a reform of all bodies of power. Yet the European Commission's main requirement is to get Ukraine to conduct serious economic reforms, to which end, Gazeta.ru adds, Brussels is ready to allocate a considerable sum to Kiev for the modernization of the country's budget code and tax laws.

The EU would like Ukraine to achieve a growth in GDP and exports, a drop in consumer prices and an improvement in employment figures. However, Gazeta.ru analysts are divided on the proposed reforms. Some believe that now is a good time to carry out economic reforms in Ukraine, since "a shock therapy will go down better when people are more concerned about the events in the Donbass than about the economy.”

Meanwhile, others do not believe that the reforms that the European Commission and the IMF insist on will be effective when Ukrainians' living standards are falling. Gazeta.ru predicts that higher gas prices may result in "a third Maidan" in September.

The Nezavisimaya Gazeta daily reports on the continued fighting over control of Ukraine's eastern borders between the government troops and the militiamen of the self-proclaimed Donetsk and Lugansk people's republics. The paper points out that in recent fighting, facilities on the Russian side of the border have been hit too.

In the past several days, the Kiev authorities have on at least two occasions announced that they have the whole of the Ukrainian-Russian border under their control, preventing military hardware from moving "in either direction.”

However, according to Nezavisimaya Gazeta, Ukrainian border guards are unable to secure the protection of the country's eastern border. Along many sections of the border, they have lost control to the militias and are unable to regain it. 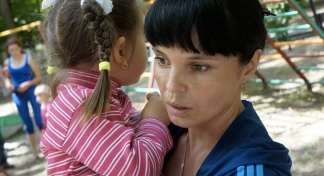 The paper also quotes UN Secretary-General Ban Ki-moon as saying that "it turns out that throughout the years of its independence, Ukraine did not bother to officially register its borders as that of a sovereign state.” For that reason, the paper suggests, "there has been no and can be no" violation of the Ukrainian border by Russia.

"Under the CIS agreement, the territory of Ukraine only has administrative borders as set within the USSR, while Russia is a legal successor to the USSR," Nezavisimaya Gazeta points out. According to the paper, it is now impossible in principle to accuse anyone of violating Ukraine's borders because "as far as international law is concerned, the country simply does not have an officially set border.”

In order to resolve this problem, the newspaper continues, Kiev must agree on border demarcation with all its neighboring states, including Russia. Although Kiev is trying to carry out unilateral demarcation, “it will be null and void from the point of view of international law," the paper concludes.